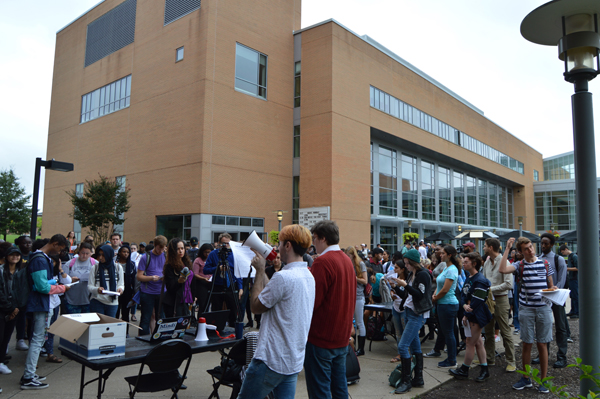 BALTIMORE — University of Maryland Baltimore County students gathered outside of the school’s Commons on Monday to protest the school’s mishandling of rape allegations against three players on the Retrievers’ baseball team – an incident that appears similar to more allegations reported by the Baltimore Post-Examiner in 2015.

The protest occurred after alleged victims of sexual violence filed a class-action lawsuit against the school, campus police and others, and in the wake of a statement by UMBC President Freeman Hrabowski that was sent to students and the “UMBC Community.”

According to the lawsuit, two women alleged they were raped by three UMBC baseball players. The lawsuit also claimed another woman claimed she was drugged and assaulted but claimed the school’s police told her to not report the incident to Baltimore County police. The alleged victim’s rape kit was destroyed before county police could get it.

UMBC officials later cleared the suspected rapist of any wrongdoing and Baltimore County officials chose not to prosecute against the athletes.

The Baltimore Post-Examiner was the first news publication to write a series of articles on sexual abuse and gang rape allegations involving UMBC, including incidents with the school’s basketball team in 2015. The Post-Examiner also broke the story in 2016 that school was under a federal investigation for how it handled sexual assaults at the school.

UMBC’s actions prompted Nate Stewart, Erin Schoeneman, and John Platter to organize a protest once students returned to campus Monday morning. They began by handing out a full list of demands for the University to improve the system which has failed victims for years and read it aloud to the crowd.

Platter shared his own experience with sexual assault and harassment on campus and invited fellow victims to come forward and tell the crowd their experiences and struggles to seek justice. Numerous students and alumni came forward with their heart-wrenching stories. The Post-Examiner does not identify names of victims of sexual abuse unless the victim asks for their name to be published.

The organizers also asked students to sign a petition to get UMBC to accept the demands of the group Speakout to Oppose Predators and their Protectors and fellow students.

The group then marched across Academic Row to the administration building to confront Hrabowski.

On the way, they chanted “We demand justice! We demand change!” as well as “However we dress, wherever we go, yes means yes, no means no!”

The protestors marched up the full 10 stories to Hrabowski’s office, continuing their chant.

Hrabowski met with the students in a conference room, where Platter and Stewart read out their demands. Hrabowski was sympathetic to the cause but explained his legal limitations given that he represented a group named in the suit.

He promised to make a plan of improvements with the aid of students, student organizations like the Women’s Center and a third party group with better expertise on the matter. He also recommended that students speak at the town hall on Thursday from  3:30 p.m. -5:30 p.m. in the Fine Arts building.

“The turnout was a bit more than we expected, especially with the rain,” said Nate Stewart, a STOPP administrator who organized the protest. “We had been worried that that might have scared people off but it seems that the student body’s desire to be heard overcame their desire to stay dry. I feel like our message was heard and resonated well with the student body, if not so much with the campus administration. We expect that we may have hard negotiations ahead, sadly.”

Monday evening, members of STOPP attended the Student Government Association meeting and presented their demands for the group’s approval. They are set to vote on the measure to endorse the demands at their next meeting on Sept. 24 at 5:30 p.m.

Costa Swanson is a Computer Engineering major at UMBC who has worked for the Baltimore Post-Examiner since 2015. He loves music and sports, especially his Stanley Cup champion Washington Capitals.

Oscars: Results are as expected