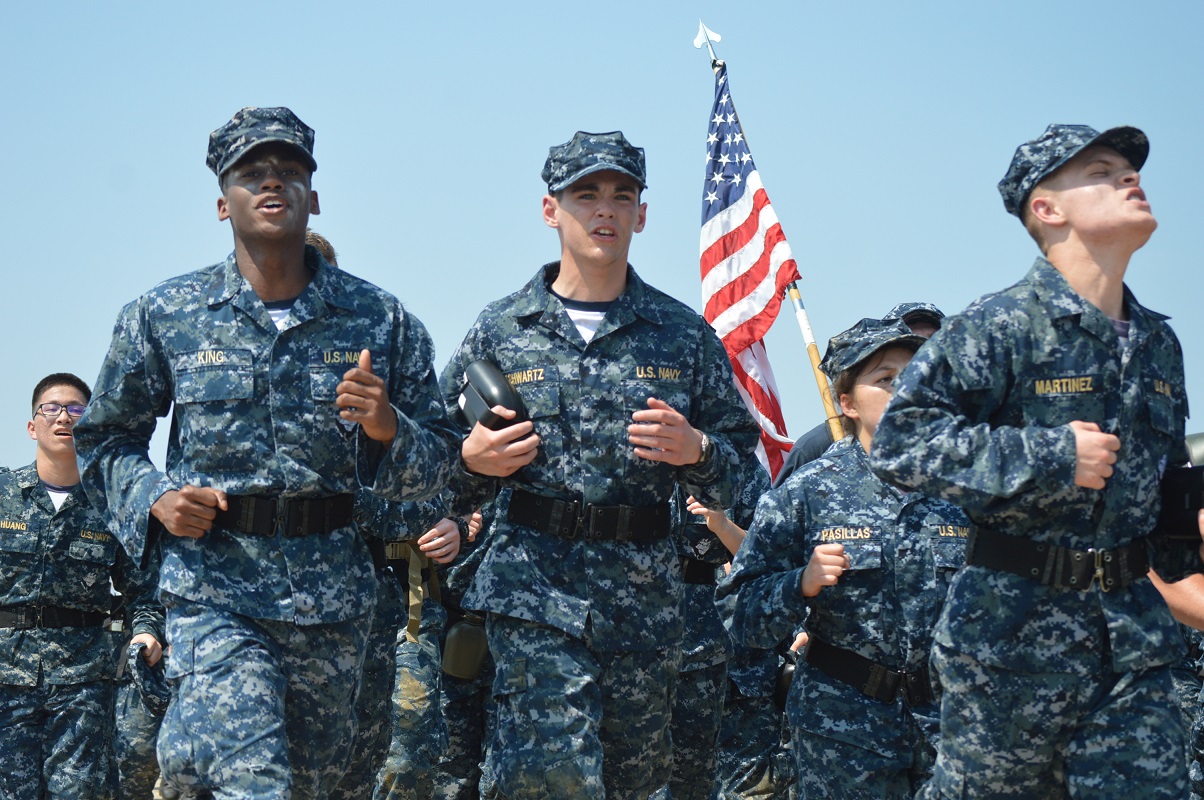 There is nothing comfortable about crawling on your belly through a mud-filled trench – especially while wearing a sopping wet uniform, carrying a rifle in your hands, and ducking an entanglement of barbed-wire. But for six small battalions from the United States Naval Academy Class of 2021, the gloppy groveling is just one of some thirty “Sea Trials” designed to round out their freshman year.

Sea Trials is a rigorous 14-hour Navy and Marine Corps-related team challenge. The annual exercise began in 1998 with the Class of 2001. Modeled after the Marine Corps’ Crucible and the Navy’s Battle Stations recruit training exercises, Sea Trials is the capstone event for academy freshmen or “plebes” as they are better known. The event also serves as a leadership challenge for members of the upper class, as they lead the plebes through a series of physical and mental tasks designed to test company teamwork.

At the end of the event, the company of plebes who demonstrates the top unit performance is recognized with the coveted “Iron Company” award. Almost all finish slightly bloodied but unbowed. A few are inevitably carried off on stretchers.

On Tuesday, the Naval Academy staged its annual Sea Trials. Abigail Argo, a Class of 2020 midshipman from Florida, guided the Baltimore Post-Examiner around the taxing course.

“I did the Sea Trials last year, and it’s funny because there is a picture of me in the trench with mud all over my face. When I did this, honestly, I was a little nervous, because everyone said it is so long and tiring. But it’s not as bad as they say, because you have your classmates with you and everyone is doing it together. I was happy to be finished, though. It was kind of a relief to get through it all. It was an accomplishment.”

Walking between stations near the foot of the Naval Academy Cemetery, Abby shared a bit more of her personal experience in Annapolis.

“This may sound kind of boring, but I really enjoy my classes. I’ll admit, I’m a nerd. Next for me are the football games. I’m not a huge football fan, but it is fun to cheer with your fellow classmates.”

Abby said her goal upon completing her studies is to go into Naval Aviation – either as a pilot or a flight officer.

“My ideal aircraft would be a P-8 Poseidon. They’re kinda focused on maritime security, and they are larger. So hopefully, it works out.”

Once the trials are underway, the six battalions are divided in half between the two shores of the Severn River. After a pre-dawn shuttle by bus or by boat is complete, the Naval Academy Bridge is the sole tread which connects the opposing camps.

On the East side, plebes encounter the likes of the Athletic Combine, Ground Fighting, Pugil Sticks, and a two-part Obstacle Course. On the West side: Wet and Sandy, a Stretcher Carry, the Zodiac Race and Hill Assault. Thirty-six challenges in total await the anxious warriors as they hopscotch between seven different phases or zones. Rest stops include an assortment of potable fluids and the military rations known as MREs.

Each company has a lieutenant’s rank officer from either the Navy or Marine Corps. Subordinates are on hand – not to bark out orders – but to direct the plebes in completing the Sea Trials tasks.

The relevance of some of the Sea Trials – such as crawling through a trench with a rifle in hand – are self-evident. Other tasks, however, are a bit more puzzling. In one such task, plebes have to duck-walk some thirty yards to where a chain of padlocks is sitting on the ground. They must then use a combination they were given at the starting line to open one of five locks on the chain. It should be noted that the chain itself has a padlock. Could that be the lock they should try first?

In another trial, six or seven plebes stand atop a six-square-foot sheet of plastic.

“They have to flip the tarp completely over without stepping on the ground, or talking with each other,” explained test proctor William Paris from Louisville, KY. “Their communication must remain non-verbal, so you’ll see hand motions or gestures or guttural noises – whatever they choose to do.”

The penalty for coming in second in these two-team competitions? Each plebe has to carry a classmate on his/her back for a hundred yards or so.

Of course, the guttural noises were not confined to the simple sheet of plastic. One zone over, seven stalwarts strained to flip a huge tractor tire. The muddy trench was no better, as individual plebes groaned their way through the shallow circuitous course. But even there, the feeling of comedic camaraderie was evident. One plebe made his way amongst the ranks shouting, “Does anyone need a hug?”

Kyle Jaunich of Charlotte, VT. did not actively participate in the trials. Still, he ran alongside his junior midshipmen – carrying an American flag.

“It’s something I did last year. I wasn’t allowed to run in the Sea Trials with my company, so one of the upperclassmen gave me the flag and I spent the day running with them. It seemed to boost the morale of the company, so I thought I’d bring it out again this year.”

Kyle’s encouragement seemed to help quicken the pace of one company of tiring plebes. He later told us he hopes his academy years take him into Naval aviation, flying helicopters.

Christian Daniel, a plebe from rural Owings, MD., paused to catch his breath before jumping into the tire flip competition and gas can hoist.

“It’s been pretty fun, actually,” said Christian. “I was nervous coming in – a lot of us were. But once you get out here and get started, you have fun with your classmates. It’s definitely not as bad as I anticipated it would be.

“Everyone started off with a pre-dawn Dark Phase out in the field with a bunch of stations. Then we came out to Hospital Point to do Wet and Sandy, the Trench Crawl, the Zodiac Run and other stuff. Now we’re just getting back from the pool portion, where we played water polo and treaded water. Going to the pool after Wet & Sandy, I’d say we kinda lucked out. The toughest part so far? I’d say just the running in general. There’s a lot of running, transitioning from station-to-station. And we’re gonna have to do the bridge run later this morning, so eating in-between and staying energized is the most difficult part.”

What does Christian hope to do after he graduates from the academy?

“Honestly, I’m really not sure, so right now I’m keeping my options open. Hopefully, the summer cruises I’m going on will help clarify some of the choices,” he said.

Motoring over the bridge to the east side of the river, Abby told us, in the first class year, midshipmen put in their preference for the Marine Corps or the Navy.

“In November of their fourth year, the seniors learn what they get. That’s when you decide. But there are some requirements for the different communities you have to do to even be considered. For example, the Marines require students to do something called Leatherneck. It’s a training they do over the summer. You’ve got to complete that before going into the Marines.”

Do the Sea Trials factor into the various military community requirements?

“No. This is simply to finish up plebe year. It’s really just all about teamwork,” said Abby.

Along with simulated combat and other challenges on the East side, there are two different obstacle courses.

The O-course consists of a short series of elevated log and rope impediments. Curiously, plebes only had to pull themselves halfway up the ropes. Abby explained that, in last year’s trials, too many plebes had been injured while climbing.

The E-course – a three-mile run, with an occasional obstacle – is designed for endurance. Completing the Marine obstacle course is a prerequisite for all freshmen.

Each company is timed, as they work to complete the various trials. The times then go into their scores. There are also scores in the ground fighting events, which go into the overall score. At the end of the day, the squad that comes out on top gets the name “Iron Company.” Abby told us the Iron Company doesn’t get out of their regular duties, but the award conveys a sense of pride.

But is “pride” the only thing to be gained from the grueling 14-hour Sea Trials?

Not for the plebes who have chosen to dedicate their young lives in the service of their country.

As one midshipman – who participated in the Sea Trials in the role of a Navy corpsman – matter-of-factly observed, “No one here wants to go to war, but if we have to go, we’ll be ready.”

CORRECTION: An earlier post of this story misidentified the Naval Academy Bridge as the Pearl Harbor Memorial Bridge. We regret this error.