The “State of the States” report released this week puts hidden state and local debt at $7.3 trillion, stating: “States do not account to citizens in ways that are transparent, timely or accessible.” If state and local governments fail to act decisively now, cities, towns and counties will go bankrupt, and states could fall beyond a fiscal event horizon into perpetual debt.

Since its inception, State Budget Solutions (SBS) has worked  to identify the root causes of state government financial disarray, and to offer reality-based solutions. The new “State of the States” report released this week lends its voice to a growing chorus calling for immediate action to confront state and local governments’ forlorn financial outlook.

The State of the States report is a project of the W.P. Carey Foundation, Harvard Kennedy School Institute of Politics, University of Pennsylvania Fels Institute of Government, and the American Education Foundation. At the state level, the group reported debt approaching $4.5 trillion. That figure corroborates the SBS annual State Debt Report, last released in August based on the latest available full-year data. A per capita debt update was released October. The recent State of the States report adds an additional $2.8 trillion in local debt to this figure.  SBS did not include local debt in its study.This adds up to nearly half of our national debt.

That staggering amount is either ignored outright or shamefully downplayed by far too many observers. The recent attention paid to the problem  is progress from years of official and academic denial. State and local politicians, like alcoholics, have been telling taxpayers, government workers and themselves that they don’t have a problem. If recognition is the first step towards recovery, the State of the States Report is progress, indeed.

Troubling still is the possibility that debt may be even more than we can know. The Government Accountability Office has estimated $3 trillion in state catastrophe fund shortages, and the American Society of Civil Engineers reported $2.2 trillion in “critical infrastructure” that must be replaced by 2014.

Also unknown are trillions more in derivatives, capital appreciation bonds, certificates of participation and other deceptions politicians use to evade borrowing limits and hide debt off the books. The secretive, delayed nature of state financial disclosure makes attempts at quantifying these hidden costs near impossible.

The report makes clear, and State Budget Solutions agrees, that immediate action is needed. Without action, the problem will grow and a handful of obligations will further crowd out the wide range of services expected of state and local governments.

In this year’s study for State Budget Solutions, based on data through fiscal year 2011, economist Andrew Biggs calculated the total pension debt at $4.6 trillion.

An earlier report this year from Harvard Kennedy School’s Mossavar-Rahmanni Center “Underfunded Public Pensions in the United States: The Size of the Problem, the Obstacles to Reform and the Path Forward,” said emphatically, “Across the United States, state and local government-sponsored pension plans are in trouble. They are dangerously underfunded to the extent that their assets are unable to meet future liabilities without either outsize investment returns or huge cash infusions.”

Five other studies this year have come to the same basic conclusion. Pension liabilities are only one piece of the pie.

In at least one area, though, the report misidentifies a source of the crisis in a manner that could lead to mistaken solutions. The State of the States report argues that the Great Recession caused “falling tax revenues” because “as the recession hit, state receipts fell across all major revenue streams – personal income tax, corporate income tax, sales tax, and user fees.” That doesn’t tell the whole story from taxpayers’ perspective because the authors only looked at states.

Including local taxes, the total burden on citizens and businesses – crushed by a 5.1 percent Gross Domestic Product decline, according to the study – actually increased 7.6 percent, or $98 billion since the historic high of 2008.

The answer lies in the budget process itself, not in finding a solution to expected fluctuations in yearly revenues. Current processes rely heavily on the previous year’s expenditures as a baseline for the current fiscal year. State governments must start using “Reality Based Budgeting” that exposes hidden debt and budget gimmicks. Under Reality Based Budgeting, states would remain prepared to handle lost revenues. They would also more effectively allocate extra revenues in the good years. Timely financial reporting and a switch to accrual rather than cash-based accounting, as the State of the States report calls for, are also sensible solutions.

With regards to pension liabilities, the first step is to end the denial. The second is to freeze defined benefit pensions, amortize the true unfunded liability, and shift to defined contribution, cash balance or hybrid plans.

Even if politicians take these decisive and drastic steps now, it will be 50 years before this crisis ends.

If they fail to act decisively now, cities, towns and counties will go bankrupt, and states could fall beyond a fiscal event horizon into perpetual debt.

The editorial is from Statebudgetsolutions.org. 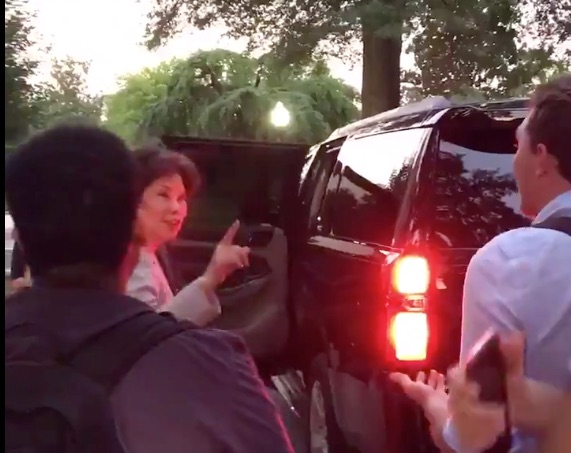 McConnell, Chao are the latest to face the public’s wrath