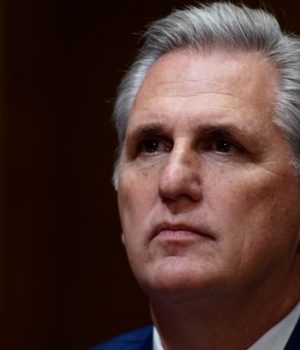 “I have not seen the resolution yet. I would think you would want to identify where the problem rests,” McCarthy (R-Calif.) said in response to a question from TMN at a news conference on Wednesday.

McCarthy went on to suggest Democrats should take a tougher stance than they did last month when Omar (D-Minn.) made similar remarks.

“So what would the difference be? Congresswoman Omar, she apologized and then she made some other statements. I think it would rise to a bigger issue now.”

The resolution was prompted by comments Omar made last week that seemed to question the loyalty of Americans who support Israel.

Omar participated in a discussion forum at a Washington D.C. along with several other Democratic lawmakers. She was asked about U.S. policy toward Israel.

“I want to talk about the political influence in this country that says it is OK for people to push for allegiance to a foreign country,” Omar said.

She added: “I want to ask, why is it OK for me to talk about the influence of the NRA, of fossil fuel industries, or Big Pharma, and not talk about a powerful lobby that is influencing policy?”

The latter is a reference to the American Israel Public Affairs Committee (AIPAC).

Republican lawmakers have repeatedly called for Omar to be removed from the House Foreign Affairs Committee.

Chairman Elliot Engel (D-N.Y) told CNN on Tuesday that he does not want to strip Omar of her committee assignment. Engel is Jewish and is considered one of the most pro-Israel members of Congress. He strongly condemned Omar’s remarks and demanded an apology.

Omar has maintained that her comments were not anti-Semitic and that criticism of Israeli settlement policies should not be considered as such.

The resolution to condemn anti-Semitism was scheduled to come to the floor today but now appears slated for a vote on Thursday or Friday. The delay is reportedly attributed to a debate over whether Omar should be named in the resolution and if it should be amended to denounce other forms of bigotry.

Omar has said she supports the Boycott Divestment Sanctions (BDS) movement, whose principal aim is to boycott the Jewish state over claims of mistreatment of Palestinians in territories Israel won during the 1967 Six Day War.

Omar was born in Somalia. She and fellow Democrat Rashida Tlaib (Mich.) are the first two Muslim women to serve in Congress. Tlaib is of Palestinian descent and is also a harsh critic of Israel.