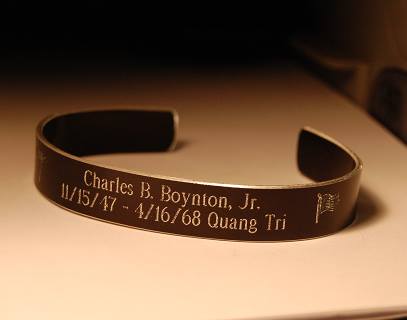 “Let no vandalism of avarice or neglect, no ravages of time, testify to the present or to the coming generations, that we have forgotten, as a people, the cost of a free and undivided Republic.”  – Maj. Gen. John A. Logan, May 5, 1868.

Stan Modjesky and Charlie Boynton were about as close as two friendly boyhood rivals could be.  Born just three days apart, Stan and Charlie attended public school together for twelve years.  The two had their first trumpet lessons at Dundalk Elementary School, in the classroom of Michael N. Prevas.  Then for the next eight years, Stan and Charlie were perpetual competitors in the trumpet section of their school’s bands.

After high school, Stan served in the Army, got into radio, worked as a journalist and even owned a second-hand bookstore.  And he continued to play the trumpet; something that undoubtedly would have pleased his friend, Charlie.

Charlie also went into the service straight out of high school.  He enlisted in the Navy and became a medical corpsman.  On April 16, 1968, during heavy fighting at a remote outpost in Vietnam, Charles B. Boynton, Jr. gave his life while trying to save his fellow combatants.

On Memorial Day, Stan Modjesky, now 65, donned the Army blue dress uniform of the Maryland Defense Force and took his position at Crownsville Veterans cemetery for the playing of Taps.  He was also wearing a custom memorial KIA bracelet with the name and date of the death of Charlie Boynton.

Boynton died while deployed at the Marine garrison of Khe Sanh in the Quang Tri province during the waning days of the Tet Offensive.  American and South Vietnamese forces suffered over 3300 casualties during the siege of Khe Sanh including 703 killed and seven missing in action.  On April 16th alone, 43 U.S. servicemen – including four Navy medics – lost their lives.  North Vietnamese losses around Khe Sanh, though not precisely known, are estimated at somewhere between 10,000-15,000 dead and wounded.

“Some people saw joining the Navy as perhaps being a somewhat less dangerous option,” Modjesky observed, “but there is nothing more dangerous than being a medic.  Medics are on the same battlefield as combat solders and working under fire.  Going in, they are carrying trauma kits; coming out, they may be carrying a wounded Marine.”

Medics are also issued sidearms, but as Modjesky noted, “They don’t pack enough ammo to last very long in a fight.”

“I live near Evangelinas Greek Orthodox cemetery in Woodlawn.  Some years ago, I discovered that my old elementary school music teacher, Mike Prevas is buried there.  I never knew he had served in World War II until I saw the inscription on his headstone; that he was a Tech Sergeant in the Army Air Corps.  After that, I would slip in there to play for Mike.  Then one day, I got caught by the caretaker.  That’s how I got started playing Taps for funerals.”

Prior to playing Taps for Prevas, Modjesky says he had only played the mournful melody perhaps a half-dozen times.  This year he will sound Taps for nearly 300 missions with the Maryland National Guard Honor Guard.

“Of all the things I have done in my life, this work is probably the only thing of any genuine importance.”

A history buff, Modjesky is keenly aware of not only the solemnity of these august occasions but also of the significance of the holiday’s origins.

“I prefer to use (the term) ‘Decoration Day’ over Memorial Day, because it’s what I had heard as a kid, and because it pays a bit more homage to the history of the observance.  If you watch the families of the people who turn up at the Evangelinas Greek Orthodox cemetery, you see a bit more of the traditional activity, of tending to and decorating the grave on the last weekend in May.”

“Some might view that as an affectation on my part.  I also like to think of November 11th as ‘Armistice Day,’ to remind myself why we first chose that date as a holiday.”

Modjesky spoke briefly about another friend and fellow musician, Lt. Col. Brett M. Schaffer, who passed away on May 4.

Saying he was thinking of also getting a memorial bracelet made to honor Col. Schaffer, Modjesky paused for a moment to consider his Boynton bracelet.

“As I think back on the twelve years we spent together in public school, I cannot recall ever having seen him angry. Charlie is my own personal Vietnam war hero.”

The Race: The Economy, Stupid