No, I’m not hitting copy/paste by mistake. For some fans, the protagonist’s romantic life is more important than anything else that happens. And I do mean anything.

Today, my readers, we’re going to talk about shipping.

Most fans have at least a peripheral idea of what that is, but I’ll explain for people confused as to why I’m talking about transporting cargo. See, a “ship” is short for a “relationship”. So when you “ship” something, you’re interested in the (usually romantic) relationship between (usually two) characters. You really want to see them get together as a couple. There are plenty of ship-related metaphors that have come into use, including “the ship has sailed” (the couple has been confirmed to get together in the story), and “the ship has been sunk” (the story has confirmed that these characters will never get together).

How angry? Why, enough to send death threats to the author, of course!

While the internet has made it more prevalent, shipping is not a new thing. At all.  I’m sure some ancient Greeks reading The Odyssey really wanted Odysseus to stay with Calypso and forget about Penelope. In more modern times, the Star Trek community had an entire underground network of Kirk/Spock fanzines. Shipping will never go away. I ship. You probably ship. The act of shipping is not a bad thing.

Now, how does this relate to my previous posts about fans and media analysis? Well, shipping is a huge part of fandom, and fans who are really into shipping tend to make that a big part of their analyses. If they want Character A and Character B together, they’re going to interpret the text in a way that supports the A/B ship.

You already see the problem here, right? What if this goes against the text? What if A and B have never acknowledged each other, romantically or otherwise? What if the author flat-out says that ship won’t happen? In that case, are these A/B analyses correct?

To get into the answer to that question, let’s first talk about what’s canon and what’s not. No, not “cannon” (though it has been used in that context)– canon, with one N. In fandom terms, it means what is “official” in a work of fiction. To go back to Harry Potter, Harry having green eyes is canon. Harry’s parents being James and Lily is canon. Snape being in love with Lily is canon; Lily reciprocating his feelings is not, but it’s not canon that she didn’t have feelings for him either. 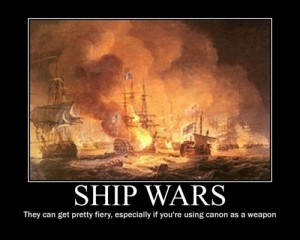 Harry secretly being Snape and Lily’s love child is… very much not canon. But there are people who believe it, most notably the Lily/Snape shippers. Well, I don’t know about “believe,” since it’s sometimes hard to tell, but at the very least they want it to be true so badly they latch on to any little bit of evidence they can find in the books and say it’s true.

There’s no denying that canon is important to shippers. In shipping wars– which is exactly what it sounds like– arguments often devolve into which ship is more “canon” than the others. The canon ship is regarded as “correct” and “superior,” while other ships range from “not as good” to “flat-out wrong”.

Whether we treat canon as the most important thing about a story, or the story really belongs to the fans and they have the right to change the meaning… that goes into Death of the Author territory, which I won’t be getting into in this post. But that’s the gist of shipping.

Now here’s my take on it.

Before I really knew what shipping was, I was hanging around Lord of the Rings fansites and discovered that other people thought Faramir and Eowyn were a very romantic couple. That was great, because I loved them in the book! Almost immediately after I discovered the existence of Aragorn/Eowyn shippers. I was confused because, well, that’s not what happened in the book, right? And then I found the Aragorn/Legolas shippers and decided that what happens in the book might not be necessary in fandom.

As a fan, I admit to shipping quite a bit. I ship canon pairings, non-canon pairings, and pairings that really should be canon already, come on Nintendo, make them get together in the next game– ahem.

I’ve never been passionate enough about a particular ship that I insult or belittle the people who disagree with me (again, death threat? Really?). And if a ship I like doesn’t become canon, well, there are more important things to the story than romance. Besides, just because a ship isn’t canon doesn’t mean it’s wrong, or not as good. It just means it’s not canon.

But what about the people who think that Link and Zelda (see above) are a horrible couple and should never be together? Obviously, I disagree with them (not enough to send death threats or anything… just… really?). Are they wrong, though? No. They’re entitled to their opinion. And even if that ship does become canon, they’re not wrong for disliking it. It’s when they deny that the pairing should even exist, and back that up with their own biased analysis, that I start to get a little annoyed.

Analysis shouldn’t be spent on which characters you think should get together. You can analyze a pairing, but to use that as evidence that it’s superior or inferior is ridiculous to me.

Shipping is a part of fandom, and I fully support it. But please, fans, don’t let it ruin your enjoyment of a work. You are not a better or worse fan for shipping or not shipping or whatever. There’s just too much time spent on it. Let’s focus on more interesting things.

Forex Trading is a Business

What factors determine the best generator for home use?