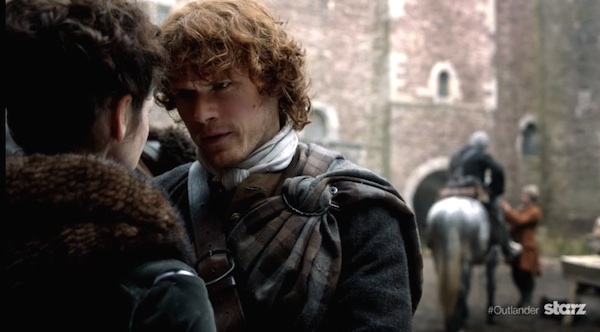 Some TV shows just go better with whiskey.  Like, maybe I’m drinking wine or beer, and then Mad Men comes on, and I have to switch.  You can’t watch Mad Men with a glass of wine.  I mean, maybe you can, but I can’t.

House of Cards is another one.  Ever notice how much whiskey they drink on that show? Californication went well with a nice bourbon before it ended (boohoo).  Also, Naked and Afraid, in which they do not drink whiskey, but for some reason, I just really enjoy watching miserable naked people starving to death and killing snakes and eating bugs while I drink bourbon.

But there’s a new show that blows the rest out of the water when it comes to requiring a dram in the hand: Outlander.

Based on the bestselling novels by Diana Gabaldon, Outlander debuted on Starz this past Saturday.  As a huge fan of the books, to say I was excited about the TV adaptation is a serious understatement.  I had actually planned a party for the first episode, complete with costumes and corsets, but then they scheduled the first episode for my twins’ birthday, so alas, instead of a corset and kilt party with Scotch whisky and Scotch eggs, we had a kids’ party with silly string and cheese balls.

Which is also a good show, by the way.

Anyway, Outlander.  The books and the show focus on Claire, a WWII combat nurse from the 1940’s, played by Caitriona Balfe, who is transported back in time to 1740’s Scotland.  And I don’t think it’s spoiling too much to say that romance ensues with the super hot and yummy Sam Heughan as Jamie. I mean, he’s on the poster beckoning to me.  No, not to me, to HER.  Um.  Yeah.

Kudos on the casting.  For real.  Swoon.

The more personal romance angle is set against political intrigue and action, as well as the struggles of a strong, more modern woman to adapt to the gender politics and realities of a vastly different historical time period. And it’s brought to you by Ronald D. Moore, who brilliantly adapted the newer version of Battlestar Galactica.

The first episode was about as perfectly done as an adaptation of a deeply beloved book can be.  I was thrilled with it, and so was my husband, who hasn’t read the books.

And there was whisky.

Sipped in a B&B in modernish-day (1940’s) Inverness, tipped from a flasky/canteeny thing on horseback to keep warm in the 1740’s, and poured onto a wound to disinfect it, a concept clearly foreign to the bunch of 1740’s Scottish Highlanders, but crucial to 1940’s nurse Claire.

If the books are any indication, whisky will be consumed in nearly every episode.  It certainly will be in my house.

The first episode, Sassenach, is available for free on starz.com.  Settle in for a deeply enjoyable hour and a half.  And have a glass of your favorite Scotch handy.