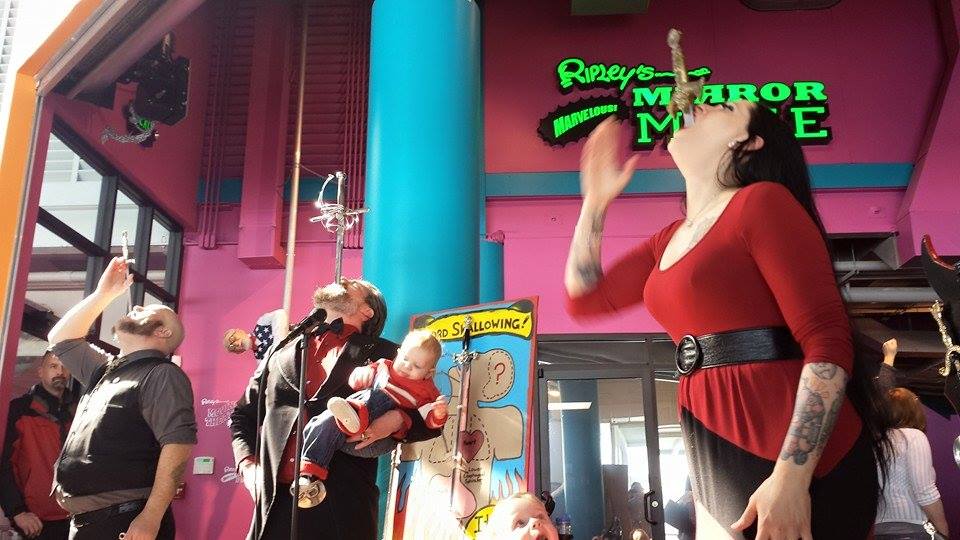 Have you ever seen an act which is so nerve racking that it virtually sticks in your craw?

Perhaps no other performance piece in the world of entertainment fits that description quite as well as the eeeewwwh-inspiring art of sword swallowing.

Last Saturday, upwards of 100 sword swallowers showcased their delicate skills at Ripley’s Odditoriums around the world for the 8th Annual World Sword Swallowers Day. Conceived as a way to honor the art while promoting sword swallowing and showing the public how the skill is performed, the event happens the last Saturday of February each year.

Filling the bill at Baltimore’s Inner Harbor location of Ripley’s Odditorium were three of the best in the business: Christopher Scarborough, Tyler Fyre and Thrill Kill Jill.

“Sword swallowing was first exhibited in America at the 1933 World’s Fair. I started back in 2007, and it took me about six years to actually be able to get a sword down. I finally succeeded about a month before my first appearance here at the Odditorium.

A Pasadena, Maryland native, Scarborough has lived around Baltimore his entire life. Scarborough is a familiar face on the local side-show circuit; appearing regularly as a street performer and in the Baltimore – DC burlesque scene. He also teaches sideshow, and counts up-and-coming performer Shaggy Wilcox as one of his students.

“We are a very small group of friends and colleagues. There only a few dozen sword swallowers throughout the world. Along with the obvious sideshow aspect of the event, WSSD provides a chance for the audience to learn the way art has impacted science.

“There have been several times where sword swallowing has helped science. There is something called the rigid endoscope which was first tried on a sword swallower in 1868 to see how digestion of meat occurs in the stomach.”

What’s the longest sword a person can swallow?

“I believe that George the Giant, who is Hollywood based, is swallowing a 33″ blade.”

For Scarborough, sword swallowing is a decidedly one-man act. For Tyler Fyre and Thrill Kill Jill, the art is a family affair.

Fyre has been swallowing swords since 2000. His wife Jill has been at it for about eight years.

“I’ve always loved circus and sideshow since I was a boy,” explained Fyre. “When I went to college for play writing (Tisch School of the Arts at New York University), I took some circus classes as an elective with a guy named Hovey Burgess. He was a great circus teacher and through that class I started to network with New York City variety artists. So I met some great people early on. I met Todd Robbins from the Coney Island sideshow; Jennifer Miller, who is a famous bearded lady, and so I kinda expanded my performance into the world of side-show.”

“I was doing juggling and fire eating for a summer gig down in North Carolina, but the following year I graduated with a Fine Arts degree and had to find a job! While heading to the DMV on Coney Island, I went by the Coney Island Sideshow. It was a weekday, so the attraction was closed, but I stopped and knocked on the door and introduced myself to the boss, Dick Zigun, who runs Coney Island USA. I said, “Hi! I’m the Amazing Blazing Tyler Fyre and I can juggle and walk on stilts and eat fire, and I’ve got a whole show that I’ve been doing at amusement parks!’ He just checked it off on his fingers and said, ‘We have all of that. What else can you do?’ And I was like, ‘What do you mean what else can I do?’ He said, ‘Well we need an outside talker. Can you do that?’ So as I’m shaking his hand saying, ‘Absolutely sir’, I’m thinking ‘What’s an outside talker do again???’”

“I showed up for work the next day – which was Memorial Day – hoping I could get some pointers on what to do from watching the other outside talkers, but they had none. The boss handed me the microphone and said, ‘Let’s see what you can do.’ I was on that mic for twelve hours that day, and the next day and the next. He kept me on, one day at a time, til I finally figured it out and got the knack for getting people into the attraction. I kept that job for three years.”

“My roommate was Frank Hartman – the sword swallower and fire eater who ran the show on the inside. He had been doing this for many, many years; grew up in a sideshow family with Bobby Reynolds. When he got ready to retire (he had met a girl and wanted to get married), he trained me to swallow swords so that he could quit and I could take over his job. Because I lived with Frank and I worked with him, I got a lot of really great pointers from Frank, but it was really around the three year mark that I thought, ‘I’ve got this.’”

Fyre said the longest sword he can swallow is 27 ½”.

“That’s just the blade. The hilt and the handle are extra. We don’t count that. It’s freakin’ long, and I prepare myself partly by stretching my stomach. That’s simple enough. I’ll eat some bread and drink some water before a show.”

Fyre said that to get 100 sword swallowers for the various events around the world, Ripley’s had to reach out to retired performers and people who don’t do sideshow as a profession. To fill his act, however, Fyre only had to reach for the hand of his wife – Thrill Kill Jill.

“In the history of the world, I am the only documented pregnant sword swallower,” Jill proudly proclaims. “I’ve really been digging into it, and there have been a bunch of female sword swallowers. You know – old carny broads. But none ever did it while they were pregnant. I’ve had three babies in less than three years, and you know, the show must go on.”

A Fairfax, Virginia native, Jill met Tyler in 2006, when he appeared at the Birchmere Theatre in Arlington as MC for Angie Pontani’s Burlesque-A-Pades. The couple dated for exactly one year and then married. That was when Jill jumped into the act.

“We got married and it was about time for Tyler to hit the road and make some money, and I knew if I was going to go with him, I’d have to be a performer as well. I had done the bookings and some burlesque at the old Palace of Wonders, but never anything else. Once I learned to swallow a sword, we got a snake and I started to learn other things. Block head, bed of nails; sorta side show 101. In time, I was able to move on to more complicated things; a mature snake handling act, knife throwing and joining Tyler with the sword swallowing.”

“It actually infuriates Tyler that it took him three years to learn how to swallow swords while it only took me three months, but I assure him that’s only because I had a much better teacher. I had him.”

When asked about her own skill at ingesting a blade, Jill replied, “I don’t know the longest sword I’ve ever swallowed. In the show, I swallow a sword that is two feet in length, but I know I’ve swallowed something longer. It’s really a matter of anatomy.”

Jill said the couple toured for about four years with their own show before starting their family. And in true show business fashion, each child has his own stage appropriate name.

“We’re quite proud of our children and of their birthdays. Hank Lightening was born on the 4th of July. Duke Dynamite was born on Halloween. And our baby, Nash Chopper, was born on Earth Day.”

All three boys were present at the Odditorum, and the two oldest joined Jill and Tyler on stage.

“When you have kids, you get so used to having children at foot; that’s just what toddlers do. They follow the parents around and watch what they do. We’re in the honeymoon phase of parenthood where they love and adore us, and want to be just like us, so we allow them to be around us as much as they want. They are absolutely enamored with our performer personalities. If they want to be on stage with us and walk around, then that’s just fine. There will come a day when they won’t want to have anything to do with us, so we’re just lapping it up, now.”

“A lot of people question our parenting skills when we allow the boys to walk around and pretend to swallow swords. But it’s really no different than children who are raised on a farm who follow their parents into the field. In fact, it may be safer. We live in West Virginia and use a wood stove for heat. Tyler uses a chain saw to cut up firewood, so the boys have toy chain saws. They sell them at Target and Wal Mart. We’re sword swallowers, and so the boys have toy swords. Toy swords are less dangerous than farm equipment and horses.”

“Some things are just normal to people and some are just shocking.”

“We’re on the shocking side.”

Christopher Scarborough will appearing at The Black Cat in DC on March 20 in A Night of Tiki Culture. More information may be found at the Facebook Event page.

More cutting edge information about Tyler Fyre and Thrill Kill Jill (including upcoming shows) may be found at Lucky Daredevil. 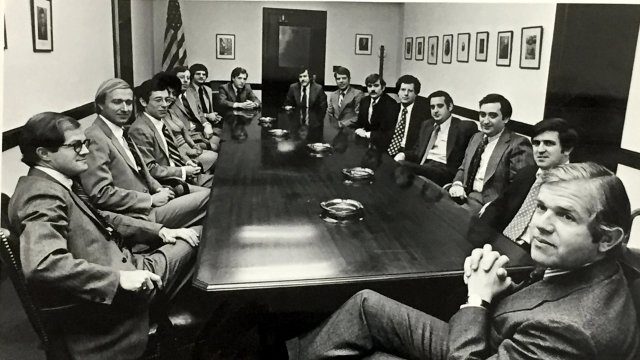