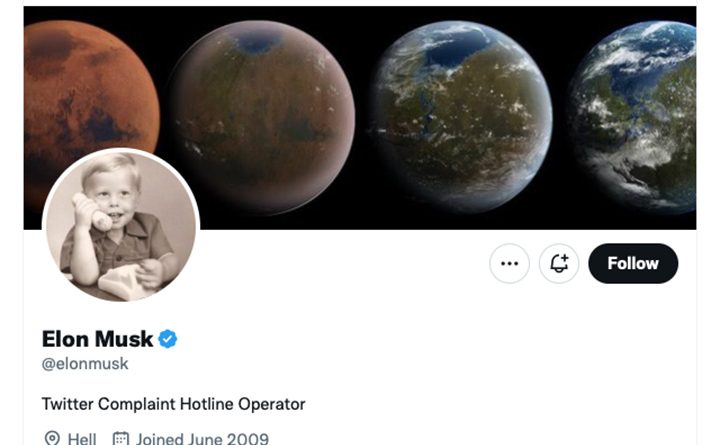 Now that Elon Musk owns Twitter, it will be interesting to see if he turns it into a platform to push his politics and give voice to the far right as Republicans ready to mount an offensive for taking back the White House (I am surprised they have not sent their army of idiots to attack it like they did with the Capitol on January 6, 2020).

Twitter becoming a tool for the far right just means there is an opportunity for some billionaire from the left to create a similar platform for Democrats. Americans insist on making rich people richer and more powerful and what better way than through our addiction to social media?

When you think about it, social media is not all that social. It’s a lot like high school where you share only thoughts that will find agreement with the group you want to belong to while at the same time you are shunned by all the others. Adulthood is not much different than those four years we wait out just so we can be called adults.

Why would anyone want Elon Musk to decide who our next president is? Shouldn’t that be the job of a stinking rich American? The right worries about poor people from Mexico coming to America and taking over our nation while they outwardly hope Musk, a South African who is wealthier than all Mexicans who enter our nation every year, will restore Trump’s Twitter account.

Twitter gets people into a lot of trouble because most of us are reactionary and fail to think before we express ourselves. This is why I do not have a Twitter account. Ask anyone who knew me in high school or sat next to me during a staff meeting and they will tell you thinking before speaking is an art I never mastered.

My biggest complaint about Twitter is its name. If people send tweets, shouldn’t their social media forum be called Tweeter?

People on Twitter love to brag about how many people are following them. What happened to the time when people who made this claim were considered paranoid?

One nice thing about Twitter is it appears to have ruined the life of Kanye West. You can add Kyrie Irving to that list as well, although any guy who claims the world is flat may be suffering from some sort of head trauma.

The less consequential you are, the more extreme and outrageous you can be on social media, which explains why so many young men flood their accounts with warnings of the harm they are about to inflict on innocent people, and it goes unnoticed.

It doesn’t matter to me what Elon Musk does with Twitter. He can fire all the employees he wants and make those who keep their jobs work 80 hours a week as has been reported. However, I laugh at the idiots on Facebook who post they hope he buys it as well. What possible changes can he bring to Facebook that will make its members happy to pay for what they now get for free?

Now I see folks are mad because they will have to pay eight bucks a month to send or like offensive tweets all over the globe. I am thinking if you can’t afford the eight-dollar monthly fee Musk wants to charge customers, you are likely on one of those “free” government phone plans and do not need to be on Twitter.

My manual dexterity, or lack of, ensures I will never be on Twitter. It takes me about five minutes to use one finger to type out a one sentence text. Before I send it, I hope it is worded just right so I feel confident I won’t have to respond to a reply. If I am lucky, they will just send me an emoji that I have no idea what it means.

At what point do we hold people accountable for the things they post on social media? Do we hold the professional athlete who is in his 30’s accountable for some socially insensitive comments he made back in high school? It’s like when we used to hold politicians accountable for smoking pot in college even though they are in their 50’s and running for president. People do change.

The attack on the husband of Nancy Pelosi seems to make Republicans giddy. I am sure they would have had a hard time not parading in the streets had the attacker managed to harm the Speaker of the House. As it is, Republicans now have a new theme song, “If I had a Hammer.”

One has to wonder how a deranged person who lives in this country illegally was able to get his hands on a hammer. If he purchased it, why wasn’t there a background check done? Did someone sell him the hammer or was the hammer stolen because the real owner failed to keep it locked up? I can’t help but wonder how many of our children live in homes that have easy access to their parents’ hammers?

I am baffled at how willing our nation always seems to fight a war abroad in the name of defending democracy but has sat back and watched its own citizens attack it more than any foreign enemy ever has. Complacency mixed with ignorance is the fuel that threatens our future.

The oldest profession is supposed to be prostitution. However, while sitting in traffic, I began to wonder how this is possible? Prostitutes charge money. To have money, men must have a job to pay for their needs and wants. Therefore, it only makes sense that men had to be working before prostitutes. Otherwise, men only began working so they could pay for sex. Someone had to pay for the dinosaur meat at Ralph’s. I need to stop getting stuck in traffic.

Back to Kyrie Irving. So, he finally apologized for his post supporting an antisemitic film. Big deal. It came only after a five-game suspension. As a result, it smells more like a forced apology than a sincere one. The dude seems to love negative attention more than he enjoys playing a game for a living which is why he is viewed as toxic in the NBA.

Nice to know it only took a week for Nike to drop Kyrie Irving from their list of sponsored athletes. Then again, considering they rely on very cheap foreign workers in sweatshops to make their overpriced shoes, I am surprised they did anything.

Let it be known that today is November 5th, and my wife has turned on the heat for the first time. It’s 66 degrees in the house which is a balmy twenty-two degrees warmer than outdoors where I am just getting set to go for a run. My money is on the heat being turned back off by the time I return home.

Sure enough, the heat was off.

Apparently, Donald Trump can’t wait to toss his MAGA hat into the 2024 presidential race. He must have really overestimated how well those red hats would go over and has decided he will run for office as long as he still has hats to sell. If he does run, we won’t need two years of nonsense campaigning to determine who our next president will be. I say if he runs, we hold the election next Spring and get on with our lives.

The Rock n’ Roll Hall of Fame held its annual induction ceremony and thank goodness those bastions of the Devil’s music, Lionel Richie and Dolly Parton, were among the recipients. Seriously, when are they going to change the name to the Music Hall of Fame? Country music is not about to elect Axl Rose to their Hall of Fame so why should Rock n’ Roll be electing the likes of Richie and Parton to theirs?

I am not sure the Houston Astros get it. They already are telling us they “earned” this year’s World Series title, but that is only because they were caught cheating on their way to their first title in 2017. What if they had never been caught? Houston can win the next 20 World Series for all I care, and I will still see them as an organization built on cheating.

Then again, maybe it is because they are Houston, a city in a state that doesn’t produce a single sports franchise I like.

If there was an ounce of integrity or consistency, Major League Baseball would make the Astros vacate their first World Series title. Instead, they said it is okay to cheat as a team, but not okay for individuals to cheat by using PED’s or to bet on the game.

A recent report on nose picking says nose pickers have an increased risk of late onset Alzheimer’s. This is not all bad news  If you have a family history of the illness and are worried about coming down with early onset Alzheimer’s, start reaching for your brain with your index finger. It could postpone a bad disease long enough for you to die from embarrassment.

If picking your nose leads to Alzheimer’s, does scratching your butt lead to prostate cancer?

What government paid study picked up the bill to determine how nose picking and Alzheimer’s are linked? I am sure I can think of a few more studies if Uncle Sam wants to pay me to conduct them. My first is to find out if people with a prosthetic eye have half the vision of those who have both their eyes.

Reading about the death of Aaron Carter at only 34 years of age reminds me of the death of Andy Gibb. When you are the younger brother of famous older siblings, it can be more than just a little challenging to carve out your own identity and sense of worth in this world. I hope he rests in peace.

My final thoughts on the midterms are we will be ushering in a new year before all the court challenges to the election outcomes are decided. This is not just the result of divide or hate that exists in this nation, but also the end result of raising people to believe they never lose at anything.

We used to accept the results as they were tabulated and certified by people who were more committed to fairness than to who wins an election. There is a lack of respect that precedes any distrust one party might have about the other and it is this lack of respect that drives people with a clear agenda centered on wanting everything for themselves while leaving nothing for those in opposition.

“United we stand and divided we fall” is not just a saying. We can help hold each other up or die from the impact each of us eventually absorbs when we gamble on conquering instead of uniting.

The Race: Obama won, get over it and here’s how he did it