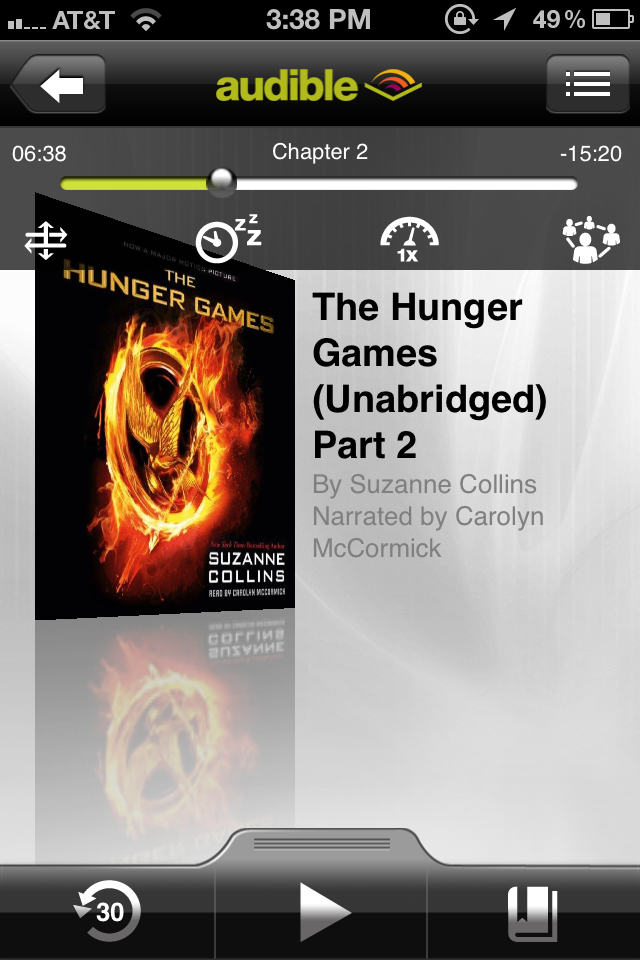 Since I spend close to three hours a day driving, I am always looking for new music, podcasts or other material to listen to in the car.  I decided to listen to audio books.  I had not listened to an audio book in quite a while, so naturally I did not know what to expect.

I headed over to audible.com (site owned by Amazon) and I picked up the first book in the Hunger Games series.  What I did not expect was for this audio book to cost around $23.  The only way to get this cheaper was to sign up for the premium account for $7.99 which comes with a free audio book a month.

After spending close to 20 minutes trying to get the audio book on to my iPhone I finally got to listen to it.  Since I have not listened to an audio book in a long time I did not know how they had evolved in the past decade or for that matter since 1930 when books were played on scratchy vinyl for the blind.  At least for this book, not much has changed. Even the audio quality seemed exactly like it was 15 years ago, but it’s better than the vinyl.

After being so disappointed I thought about what really made me mad about this audio book.  And then it came to me.  They still only have one person reading the entire book.  In this particular case it was one lady reading the book, including doing all of the men’s voices, women voices and even doing sound effect every once in a while.  I am not sure whyso few have had the idea to get a group of voice actors together for a few days to record a audio book is beyond me.

Then it occurred to me – I got ripped off.

Some groups actually spend a few bucks and do a professional job, such as the small company, Wild Voices. They even say you might not like it because they do multiple voices. Turns out they have been doing this since 1982 so it seems people are approving it with their checkbook.

What’s more, look at who recently is up for the audio recording awards –

THE MARK OF ZORRO

by Val Kilmer and a Full Cast(Blackstone Audiobooks)

WE’RE ALIVE: A Story of Survival, the First Season

by A Full Cast(Blackstone Audiobooks)

by A Full Cast(L.A. Theatre Works)

Notice the common theme here. All these finalists have a full cast. So what’s up with Hunger Games? Budget cutbacks? Or are they just expecting the movie to pull in the cash?

Ok, I’ll give you this. Audiobooks have come a long way from the ‘talking books’ that my grandmother recalls. Those used to be on vinyl records and actually were for the blind in the 1930s. “And it was better than doing nothing,” my grandmother says.

Back then, while not the slick technical production, we see today, but they had professional narrators who auditioned and won the roles. Check this little tidbit out, I found from an early Talking Books report: “We have auditioned literally hundreds of professional actors and have found less than 10 readers who combine the qualities of educational background, voice, accuracy and stamina essential for this work.”

A lot of smaller companies are introducing multiple voices and once in awhile a full cast. Purists might think that too much sound affects, and too many people, destroy the one voice throughout the book. I got a long commute. I need variety – not monotony.

So a little further surfing, I learned of a website, Whose Voice Is That? has made life a little simple for me and compiles a bunch of narrators and the books they tackle. That gives me a little more direction. Then, of course, I think I’ll start throwing my dollars toward the smaller audio companies, such as Wild Voices who get it – a full cast, live book theatre.  As they say in their promotional material:  “It’s a time-consuming, demanding means of production, but it allows us great creative freedom, and gives us great satisfaction.”

And they go on to explain exactly what they have in stock and what’s coming up:

“Sir Arthur C. Clarke’s The City and the Stars features over 8 hours of compelling audio. And, if you’re a real Clarke fan, you can read about my own close encounter with the best-loved science fiction master here. We spent several years within walking distance of Fighter Town USA, home of the Top Gun training school, at the Miramar Naval Air Station (now MCAS – Marine Corps Air Station) in San Diego, California. So it was an easy decision to write and record I’m a Jet Pilot… We’re about half way through the production of Christopher Stasheff’s delightful and provocative novel that takes place in the magical land of Gramarye, The Warlock in Spite of Himself, so check back again. “

I’m sold. Maybe the big guys can take a lesson from the small guys. Granted  Gramarye is not Hunger Games, but it will do for the long commute.

Trump asking for a wall of trouble

Brian Williams: The problems with his lie

Big Pharma and your healthcare