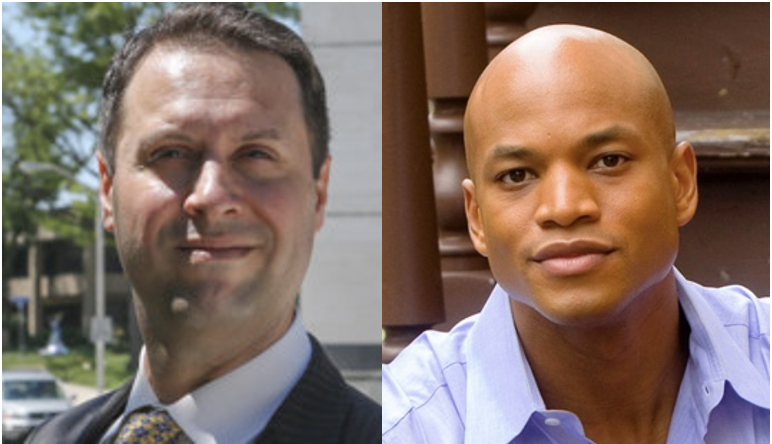 That’s Republican Dan Cox on the left and Democrat Wes Moore on the right.  Mr. Cox and Mr. Moore will be running against each other for Governor in November’s General Election.

Full disclosure, I’m a registered Democrat.  I used to be an Independent – a registered “Unaffiliated” person as they’re called in Maryland.  A couple of election cycles ago, I got tired of not being able to vote in the Democrat Primary and then having to support the Democrat everybody else picked to run in the General Election.

The table below describes the results of the primary we just had. 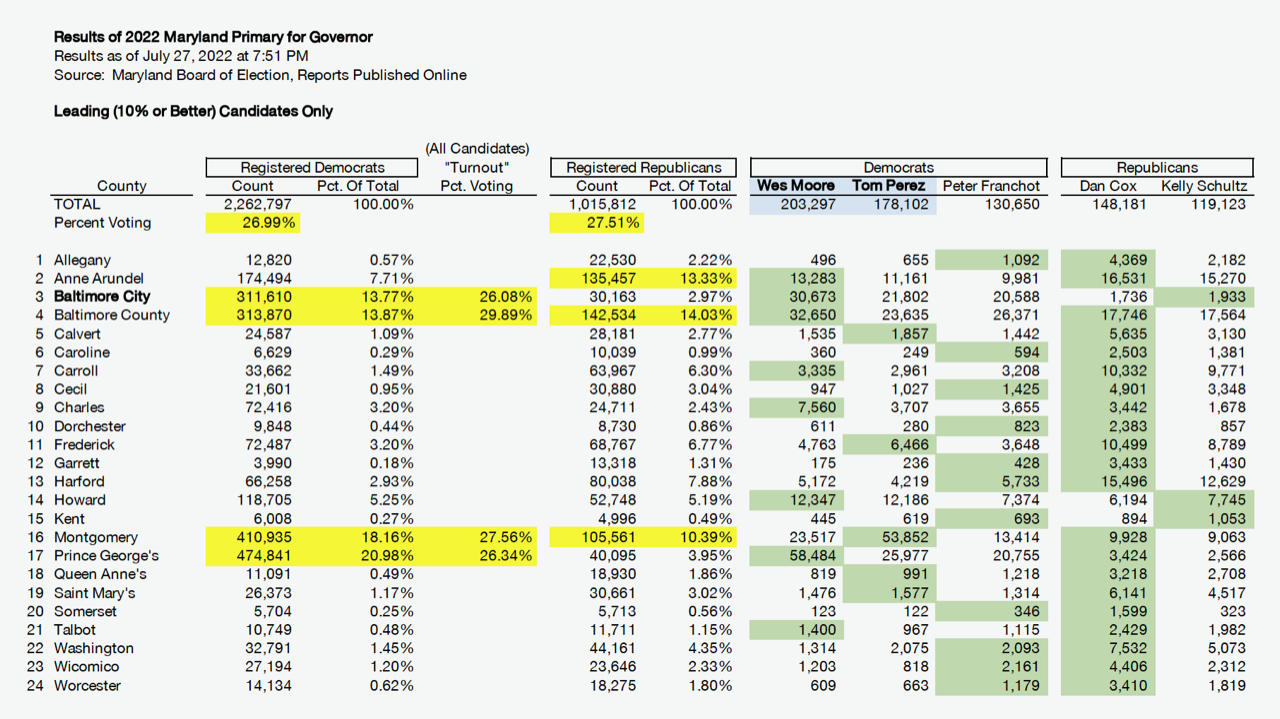 Yeah.  But if looking at data makes your brain hurt, I’m going to talk about the table so you don’t have to study it too carefully.

What the table shows are registered voter counts for Democrats and Republicans, statewide and by county and votes cast for the top five candidates…  Democrats Moore, Perez and Franchot and Republicans Cox and Schultz.  Those are the only candidates who received 10 or more percent of the votes cast in their primaries.  Nobody else matters.  All the other campaigns were just a huge waste of time and money.  Who knows why these other candidates even bothered to run?

First of all, you’ll notice by focusing on the numbers highlighted in yellow that only four of our 24 counties – Baltimore City, Baltimore County, Montgomery County and Prince George’s County – account for two-thirds of the registered Democrats in the state.

Less than 30% of these Democrats actually voted.

More than 70% of registered Democrats – in these four counties and statewide where turnout was only 26.99% overall – opted out.  Mind you, “opting out” isn’t just a manifestation of apathy.  Given how easy it is to vote nowadays, it’s an affirmative statement to the effect that, “I really don’t care who runs our state government.”  It’s a free country.  If the majority of voters want to leave governing up to the rest of us who bothered to show up, I guess I’m fine with that.  Not really, but voter participation isn’t what we’re here to talk about.

Of the four big counties, Tom Perez, who finished second behind Wes Moore, won Montgomery County handily by over 30,000 votes, but then lost the Baltimore City and County by 9,000 votes each and got creamed in Prince George’s County which he lost by more than 32,000 votes.  Basically, between the two candidates, their respective showings in Montgomery and PG Counties cancelled each other out leaving Moore to win by 25,000 votes, 18,000 of which were his margins in Baltimore City and Baltimore County combined.

When all is said and done, it is not an over-simplification to say that less than 30% of registered Democrats in just four counties – not counting any of the whopping 766,788 registered “Unaffiliated” voters in Maryland who might lean Democratic but who couldn’t vote in the primary – have just elected Wes Moore Governor.

We could hold a runoff election between the two leading Democrat vote getters, Moore and Perez, so that one of them gets a majority of his party’s votes.  After all, Wes Moore got only 33.29% of the vote, so two-thirds of Democrats who voted wanted someone else to be Governor.  Who knows, maybe Perez is the favorite of Democrats overall.  But there’s not going to be a runoff election, is there, because that’s not how it works.

Well, think about it.  Does Donald Trump versus Hillary Clinton ring a bell?  Let me be the first to admit publicly that I didn’t think she could lose, didn’t believe it for a second until well after the polls closed that fateful night.  How in the hell could Donald Trump become President of the United States?  Talk about “missing the point.”

Okay.  The Democratic Governors Association spent a fortune supporting Republican Dan Cox because it believed that he would be easier to beat than Kelly Schultz.  Cox ended up getting over 148,000 votes, just 55,000 fewer, statewide, than Wes Moore.

“But he’s a jerk.  Even outgoing Republican Governor Hogan called him a ‘QAnon whack job.’”

And your point is?  That we’ve never elected a “whack job” to high office?

Just imagine that one or more of the following happens between now and the General Election in November…  Democrat voters, certain of victory, become complacent.  Republican turnout increases significantly while Democrat voter participation remains under 30% or actually declines.

Cox, sensing an opening, calms down and moves to center right.  As a result, Kelly Schultz supporters and conservative “Unaffiliated” voters break his way.  Big money from certain Republican sources flows into Cox’ campaign.  Then Wes Moore fails to live up to expectations, maybe even stumbles in one or more televised debates.  Cox is, after all, an attorney.  He argues for a living.  …What exactly does Moore do that qualifies him to run for or be Governor?

Concerned about inflation and recession, a good number of Maryland voters look for an alternative to Moore in whom they are beginning to lack confidence.

Hello, Democratic Governors Association.  You wanted Cox and now you’ve got him.  Be careful what you wish for.

Audacity of Hope, The Reality of Anger: When will we see heroes in Congress?