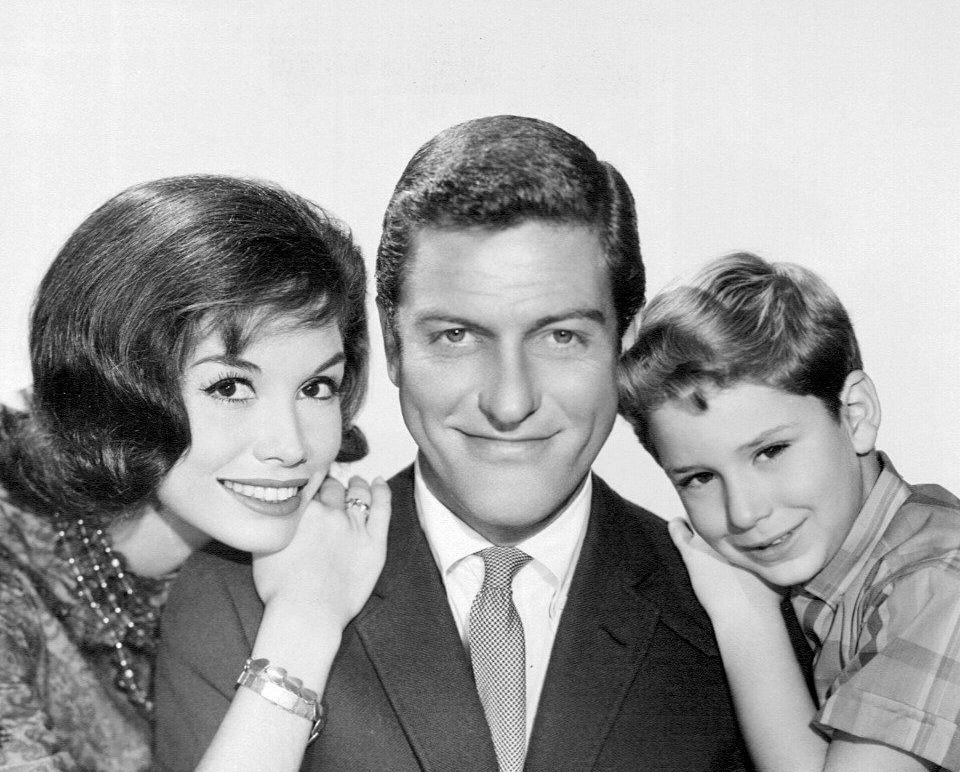 For fans of the late, great Mary Tyler Moore, the phrase “Love is all around” transcends the theme to her stereotype-shattering TV show. In the annals of television history, one would be hard pressed to think of an actress more adored by legions for a longer period of time than Mary Tyler Moore. Mary’s successes were legendary, but her struggles off-camera were often far from the happy endings of her award-winning TV shows.

In the soon to be released book Mary: The Mary Tyler Moore Story (Jacobs Brown Press 2019) Herbie J Pilato offers the first full-scale, objective, and detailed biography of the actress best known from The Dick Van Dyke Show and The Mary Tyler Moore Show. Moore’s life was shaped not only by these two benchmark series but also by the ravages of diabetes, as well as various physical, psychological, and professional challenges. More uplifting experiences came from her involvement with numerous charitable works, such as animal rights and the Juvenile Diabetes Research Foundation.

We recently spoke with Herbie J Pilato about Mary and some of the many facets of her extraordinary life. Mary: The Mary Tyler Moore Story, will be released on January 25th, 2019 (the second anniversary of Mary’s passing). The book may be pre-ordered now – in time for post-Christmas holiday gift giving.

BPE: Hi Herbie! It’s nice to speak with you again. I know you are pressed for time, so let’s just jump right into this. Why a book about Mary Tyler Moore? Didn’t she write two memoirs? 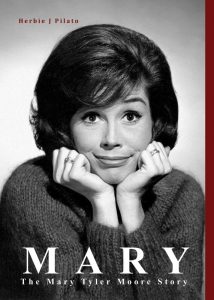 HJP: Well, I wanted to continue the theme of 1960s female TV icons I started with Elizabeth Montgomery. I had done a general book of women from the 50s and 60s, called Glamour, Gidgets and The Girl Next Door, but I wanted to do an in-depth followup to the Elizabeth bio. There were so many similarities to Elizabeth and Mary Tyler Moore anyway. They both were raised by very demanding fathers, who they tried to please from the time they were born until they died. They were both very complicated women, who decided to distance themselves from the roles they were best known for.

You can see this in their TV movies.

In First You Cry, Mary played the real-life story of Betty Rollin, a TV journalist who was stricken with breast cancer. That was shocking, just like Elizabeth starring in A Case of Rape and The Legend of Lizzie Borden. It was also strange that, in other TV movies, they both played murderous mothers with dark hair. Very strange.

BPE: Could you talk a bit about Mary’s autobiographies, and tell us how your book either elaborates on her stories or fills in the blanks?

HJP: Mary was very, very frank in her memoirs and was as honest as she could be. I admired that a lot in her. There were also biographies done on her in the 80s, but there is a whole lot of information from 1986 – 1995 that Mary did not cover in her first autobiography, and the second one came out in 2008, I believe. She died in 2016, so again, there was a lot of information which came out about those years. And there was much throughout her career that was never fully covered.

My book is the first in-depth objective biography of Mary Tyler Moore’s entire life and career. I interviewed as many people as I could that were involved in her life and career, interspersed with magazine articles, commentary and references to her other books, online resources. I tried to cover the entire gamut. There is information in my book that has never been published anywhere, based on exclusive interviews I conducted.

BPE: With whom did you speak?

HJP: I interviewed Ed Asner; Gavin MacLeod; Larry Matthews, who played Little Ritchie on The Dick Van Dyke Show; Bill Persky, who was one of Mary’s dear friends. Bill was a writer on The Dick Van Dyke Show, but he also wrote Dick Van Dyke and the Other Woman, which was a monumental TV special in 1969 and kicked off the interest in giving Mary her own TV series. I also interviewed Carol Channing, who Mary worked with in Thoroughly Modern Millie. That was her big feature film, which was supposed to kick off Mary’s film career but went nowhere.

There are others; journalists, and fans who actually met Mary. That was an angle I thought was really important to cover.

BPE: Did you have a chance to speak with Sonny Curtis – the writer and performer behind the theme to the Mary Tyler Moore Show? I saw him some years ago with The Crickets, as they opened a show for The Everly Brothers.

HJP: Unfortunately, I did not, and Sonny has also had quite the long and winding career. But I do cover extensively his involvement and contributions to the MTM show in Mary. He is amazing. And what a sweet guy! Mary very much appreciated him and his talent!

BPE: Mary battled alcoholism. What did you glean about this issue from your research?

HJP: Her mother was an alcoholic, and of course sometimes it’s hereditary. But Mary was sexually abused as a kid, and I don’t think that was really fully explored, as to how it expanded upon her other issues. Studies have shown that those who are sexually abused grow up with a good deal of self-hatred, and I don’t think Mary particularly liked herself a lot, which is sad, because she was so beautiful and she did so much for others with her charitable work.

You know as a writer yourself, we don’t have regular lives, and whatever issues writers and actors have are exacerbated in the public eye. Mary was a complicated person who led a complicated life, which hopefully makes for a compelling book. Not in an exploitive way, and I want to stress that. I did not set out to do an expose.

That is not who I am.

I am the founder of The Classic TV Preservation Society, which is a non-profit dedicated to the positive influence impact of classic television shows and stars. I’m not doing a hatchet job on Mary, but I’m telling the truth – hopefully in a dignified way.

BPE: Mary had a huge fan base, didn’t she?

HJP: Oh, they love her! I mean, who doesn’t love Mary Tyler Moore? She stayed as active as she could right up to the end, and when she couldn’t do TV, she worked behind the scenes doing her charity work. The last thing she did was a guest spot on Hot in Cleveland with Betty White, and she was very frail. But it was a big deal, that she would do this reunion with Betty and Valerie Harper and Cloris Leachman on Hot in Cleveland. That was the last thing she did.

BPE: When you talk about Mary working right til the end, I think about Shelley Fabares of The Donna Reed Show fame, another icon from that era who has had a very prolific career. But I’m not sure that even Shelley was as big a star as Mary Tyler Moore.

HJP: Oh, there’s no doubt that Shelley was adorable, but Mary was Mary Tyler Moore! I dare say she became a larger personality than even Elizabeth Montgomery. Mary changed television for the women’s liberation movement in the early 1970s and in a sense became its voice – its poster girl. Certainly, Marlo Thomas paved the way for that with That Girl, but come on. It’s because of Mary Tyler Moore that we have Oprah Winfrey, and Oprah would be the first person to say that; she was inspired by Mary. Dare I say millions of women were inspired by Mary?

BPE: And she did it in such a way that was never offensive?

HJP: Correct. That show, along with All in the Family and Maude, created a completely different era in telling comedy stories intelligently. The main plot of the 60s TV show was the “A” story, which was what was happening to the main characters, and the “B” story, which was the characters themselves. When the Mary Tyler Moore Show came along, the “A” story became the characters, and the “B” story was what was happening to them.

BPE: One of the beauties of the show – and I don’t know if this was Mary’s decision or something Grant Tinker (Mary’s producer/husband) came up with – was for Mary, even as the star, to take a step back and play the straight-man to all of those fascinating characters she was surrounded with.

HJP: Yes, and Mary said that – that she really played herself in a sense, and she was not a comedian. But she surrounded herself with A-list performers she knew how to bounce off of. A very similar thing happened with Hal Linden on Barney Miller. Mary was the first to admit that. Of course, she learned her craft on The Dick Van Dyke Show, and she tried to hone her talents in feature films, but that just did not work. She was not a feature film person – certainly not until Ordinary People, which again was playing a completely different type than what she was known for on television. She was the one cozy, fuzzy happy person on TV who tried to bring that to feature films, but it didn’t happen for Mary until she changed into a more serious type. 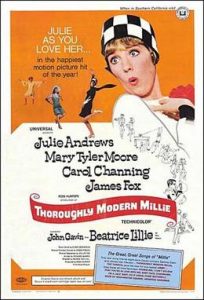 BPE: Mary co-starred with Julie Andrews in Thoroughly Modern Millie. Was that directed by Julie’s husband, Blake Edwards? I only ask, because Blake’s style would kill the career of anyone who wasn’t up to it.

HJP: No, that was directed by George Roy Hill. That movie was okay, but remember, it was a star vehicle for Julie. You can’t try to steal a movie away from Julie Andrews. Mary was playing an airy, exaggerated version of herself. It just wasn’t working. Mary always said she wanted to be a musical movie star, but by the time she grew up, the movie musical was dying. Thoroughly Modern Millie was the last of its kind, and Mary just got lost performing next to Julie Andrews. It was a silly performance that didn’t do anything for her.

BPE: What’s coming up next for Herbie J Pilato? The last time we spoke, you were working on a television show.

HJP: Yes, and there are great things going on with that which I can’t talk about right now. But I do have a TV history book in the works and another book in development. And I’m moving into screenwriting, for TV, and for film. I’m very excited about that.

BPE: Mary will be released when?

HJP: I am delighted to say the release of Mary… will be on January 25th, 2019 – the second anniversary of Mary’s passing. In the meantime, I am available for all interviews, special event bookings, book-signings, and speaking engagements.