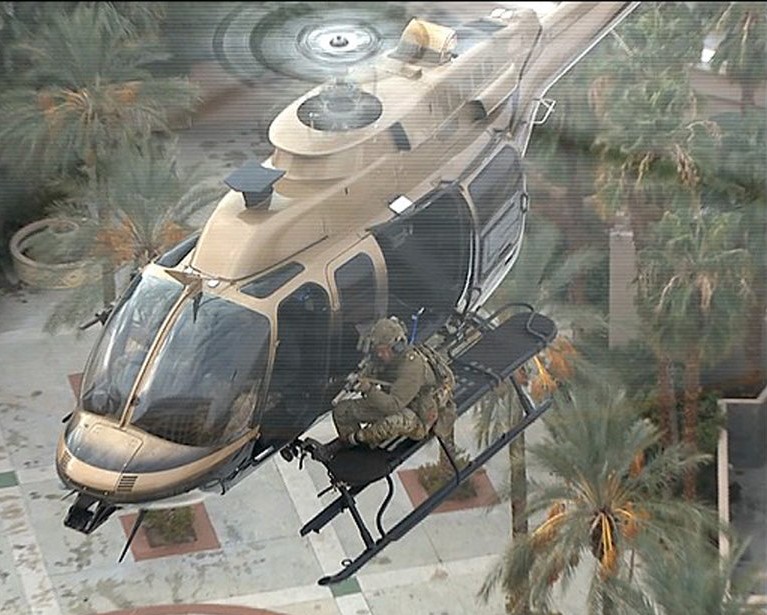 LAS VEGAS — A training exercise conducted by the FBI’s elite Hostage Rescue Team (HRT) and attended by members of the Las Vegas Metropolitan Police Department was eerily similar to the sniper attack from an elevated position that occurred on October 1, 2017 at the Mandalay Bay Hotel in Las Vegas, according to law enforcement sources who spoke to the Baltimore Post-Examiner.

On that night Stephen Paddock fired approximately 1100 rounds of ammunition from his 32ndfloor suite windows down into a crowd of 22,000 concert-goers killing 58 and wounding over 400.

Sometime after the Sahara Hotel in Las Vegas closed in May of 2011 and prior to renovations to transform the property into the SLS Resort, the property was used for a training exercise conducted by FBI and LVMPD personnel.

During the training exercise, a mannequin was placed inside one of the high-rise tower rooms near a window, to simulate an attacker.  An FBI HRT sniper inside an FBI helicopter hovering over the Las Vegas Strip successfully made the shot and hit the mannequin.

According to the law enforcement sources who spoke to the Baltimore Post-Examiner, then Clark County Sheriff Doug Gillespie was unaware that the maneuver was going to be part of the exercise and was livid when he found out what happened. Another ranking member of the LVMPD at the time, according to one source, stated that they would no longer train for such scenarios and if an incident similar to the training exercise should happen in the future they would accept liability for the outcome.

The FBI Las Vegas Division has a SWAT Team consisting of special agents and supervisors assigned to the Las Vegas Division, but unlike local FBI SWAT Teams the Hostage Rescue Team is headquartered in Quantico, Virginia and HRT members are assigned full time to the team.  The team is prepared to deploy within four hours of notification anywhere in the U.S. in response to terrorist incidents, hostage situations, and major criminal threats.

The Baltimore Post-Examiner was told that on New Year’s Eve 2017, two months after the October 1 Massacre, the FBI Hostage Rescue Team was deployed in Las Vegas along with the FBI and LVMPD SWAT Teams as a precautionary measure.

Law enforcement sources who spoke to the Baltimore Post-Examiner stated that on the night of October 1, 2017, after Stephen Paddock stopped firing and prior to the LVMPD Strike Team entering the suite, one hour after the last shots were fired, an LVMPD SWAT Team sniper deployed from a police helicopter.

The BPE was told that the LVMPD sniper inside the police helicopter had a rifle with optics capable of looking in the room and asked the pilot to get as close as possible to the broken-out window in Paddock’s 32ndfloor suite however the pilot refused because he was unsure if anyone in the room would start firing again and endanger the aircraft.

The police radio traffic from that night confirms that at least one LVMPD Air Unit was airborne:

Control Air 5, “we’re getting multiple reports from McCarron Tower [International Airport] now that there are multiple people running across the active runways.”  Then later, Control Air 5: “we have been able to clear all the lower roofs, there are employees on the upper roof, there’s like a break room up there. The lower roofs on the east side have all been cleared.”

We know that LVMPD snipers were deployed before the Strike Team made entry because of a comment made by one of the officers on the entry team.

On Sunday, October 8, one week after the Massacre three of the LVMPD officers who had made entry into Paddock’s suite were interviewed on CBS’ 60 Minutes.  When the interviewer asked K9 Sgt. Joshua Bitsko if he went to the window to look out, Bitsko replied, “No.  I knew that SWAT had deployed snipers also.  I didn’t want to put my silhouette in front of a window because communications were still horrendous.”

Why weren’t LVMPD snipers deployed during the concert

The Baltimore Post-Examiner was the first media outlet to question in several stories why law enforcement didn’t consider the possibility that a sniper attack from an elevated position might be a threat to a crowd of 22,000 people who were in an open-air concert venue that was surrounded by high-rise towers in all directions.

No measures were taken before and during the Route 91 Music festival to mitigate a possible sniper attack from an elevated position. Counter-snipers were not on standby.  Nobody in the command structure of the LVMPD thought outside the box that a sniper attack from a high rise could be a potential threat.

There have been several such attacks in this country over the years.

In July of 2016 a sniper attack from an elevated position in a parking garage in Dallas, Texas left five police officers dead and seven other persons wounded.

In Las Vegas on New Year’s Eve during the closure of Las Vegas Boulevard police snipers are deployed along the Strip to protect the hundreds of thousands of tourists who fill the streets.

One police source who spoke to the BPE for this story confirmed the sniper deployments during New Year’s Eve celebrations over the years.  He said that the question came up many times at the LVMPD that, “What do we do if someone starts shooting from one of the hotel windows down?”

Stephen Paddock fired unimpeded for ten minutes. Would things have turned out differently had there been police snipers on standby that could have responded to counter Paddock’s fire and thus reduce the casualties? That we will never know, because after all the training scenarios, prior incidents, and just plain common sense, nobody in the police department made a command decision that could have saved lives on the night of October 1, 2017, by having counter-snipers standing by.

Seven months since the Massacre and we still do not know why the full LVMPD SWAT Team was not available even after one hour to back up SWAT Officer Levi Hancock when he entered Paddock’s suite with an ad-hoc team of patrol officers.

Sheriff Joe Lombardo and Undersheriff Kevin McMahill told the press that there was no hurry because the situation was contained after Paddock stopped firing.

No, it wasn’t.  Waiting over one hour to make entry into Paddock’s suite that night was and is unacceptable.  Nobody knew if firing would start again.  The police weren’t even sure anyone was still in the room. It goes against police protocol on active shooter incidents.  The first four officers on scene are trained to make entry.

When the Baltimore Post-Examiner interviewed former U.S. Navy Seal Matt Bracken for one of our stories, he said that it was a tactically poor decision and could have led to the death and wounding of more people.  “It was still an active shooter incident whether he was firing at that time or not,” Bracken said.  “It’s not a contained situation until they got their boot on his neck and the room has been cleared for sure.”

The Baltimore Post-Examiner was told that after the October 1 Massacre the LVMPD has now trained some patrol officers as ‘Special Purpose Riflemen.’  They have AR-15 platform-type rifles with variable low power optics for longer shots and are deployed at events for watching crowds.

As one police officer told me, “foresight is priceless, hindsight is 20/20.”