Editor’s Note: This essay first appeared on MysteriousWritings.com. It is published with permission.

The American poet and writer Edgar Allan Poe (1809-1849) is the most influential writer in modern literature. Since 1860 his works are read and studied all over the world, and they were and still are an inspiration for countless other poets and writers. The international Poe Studies Association has a few hundred members at universities on all continents; there is even an Edgar Allan Poe Society of Japan.

And yet, despite all the studies and research, a lot of mystery and many enigmas surround Poe as a person as well as his work.

The greatest mystery is Poe’s death on October 7, 1849 in Baltimore. At least 40 theories and explanations exist about how and why Poe died, but none of these is conclusive and the mystery will never probably be solved. One intriguing theory speculates that Poe staged his own death with the help of a doctor who was his friend, in order to escape from his creditors. And that he started a new life in the Deep South, where no-one knew him, and where he became a mentor and ghost writer for Mark Twain.

As far as Poe’s death is concerned, almost anything goes. But that is certainly not true for most of his tales and essays, some of which have been misunderstood for a very long time, and some of which may even contain secret messages.

The mysteries in Poe’s poems and tales are of different characters and intentions, but they can be grouped as downright cryptography, as allegories or parodies with a hidden meaning, or, lastly, as prophetic writings.

Poe was fascinated by cryptography and he wrote much about it. As a journalist and editor he even challenged his readers with cryptographic puzzles. One of these was solved only 15 years ago by the Canadian computer expert Gil Broza.

In his tale The Gold Bug Poe used a cipher about a hidden treasure, in which case he used simple letter substitution as the key, the solution of which is given in the tale. But Poe also mastered more complex forms of cryptography, like the use of a key sentence of 26 letters that replace the normal alphabet.

This leads to the suggestion that Poe has hidden secret messages in at least six of his most famous tales, for these tales have an opening sentence or motto of 26 letters that could very well be key sentences. Hiding a secret message in an apparently normal and meaningful text, is a special kind of cryptography that is known as steganography. Needless to say, that the first one who breaks the ‘Poe Code’ will become world famous!

But Poe’s most ingenious use of cryptography is in the Valentine poems that he wrote for two friends, Sarah Anna Lewis and Frances Sargent Osgood. Their names are hidden in the first letter of the first line of the poem, followed by the second letter of the second line, etc. This means that these two poems of 14 and 20 lines, have a predetermined letter in a predetermined place in every line. A very clever cipher that can only be done by a magician with words, like Poe.

Many of Poe’s tales were inspired by what he saw and experienced in the society in which he lived. But usually it was disguised as a parabel, as an allegory or as a parody. So also here we have a kind of cryptography, but of a higher order. Poe’s tales are layered, which means that they can be read and interpreted in different ways; as is the case with all great literature. It was known, for instance, that Poe’s only real novel The Narrative of Arthur Gordon Pym contains many autobiographical elements, but a recent publication shows that it was also inspired by the Declaration of Independence which gives it a deeper political meaning.

Two famous tales that are also closely linked at a deeper political level are The Fall of the House of Usher (1839) and The Masque of the Red Death (1841), because both tales were inspired by the financial-economic crisis that developed in the USA after 1837 (known in economic history as The Great Panic of 1837). The Red Death deals with with the crippling debt crisis in American society, where many people and families lost their money and properties, and it condems the irresponsible and selfish behaviour of the political and financial élite during that crisis.

Poe’s most famous tale The Fall of the House of Usher (1839) is even more revealing about his political opinions. There have been many interpretations of this tale about Roderick Usher and his twin sister Madeline, who live in a gloomy and condemned house, where they each suffer from an incurable disease, eventually destroying themselves and the house in which their family had lived for generations. However, there are good reasons to assume that this tale is an allegory about the USA itself (the House) and the growing political and economic schism between the northern states (Roderick Usher) and the southern states (Madeline Usher).

This interpretation shows that Poe considered the north-south conflict as hopeless, and that he foresaw that slavery (Madeline’s chronic illness) would become the trigger for a disastrous conflict that would terminate the USA as he knew it. Roderick’s more acute illness is another metaphor for the Great Panic of 1837 and the ensuing economic crisis.

It is significant that this interpretation also gives a revealing meaning to the third person in the tale, the powerless, exited and unintelligible physician in the House, who is always ignored in other interpretations. It is a metaphor for Martin van Buren, the President of the USA when Poe wrote the tale. Van Buren indeed failed to address the slavery issue and also his economic policy was not effective against the depression. That the physician in the tale is unintelligible, is Poe’s ironic reference to the fact that Van Buren often preferred to speak Dutch, because he was born and raised in a Dutch speaking community in Pennsylvania.

So here we have another example that even Poe’s two best known tales are not the straight forward horror stories that they appear to be at first sight, but cloaked allegories or parodies of the alarming developments that he observed in the American society.

Poe was an  extremely perceptive and empathic man, so he could see and understand things that were still hidden for his contemporaries. But he also realized that such observations will not be understood by others, so he choose the literary form of an allegory or metaphor to express his views, probably hoping that the real meaning would be understood sometime. So The Fall of the House of Usher is not only a horror story about a twin brother and a sister, but it is also a prophesy about the ante bellum USA, because it accurately predicts the sequence of events that lead to the Civil War, more than 20 years later. Because the northern states started with severe economic measure (Roderick declaring his sister dead and burying her alive), after which the southern states responded with a military attack (Madeline rises from the grave to kill her brother and destroy their common and ancestral home). 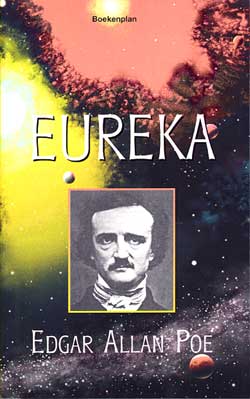 But Poe’s most mysterious and fascinating prophecy is the cosmogony Eureka that he published in 1848, the year before his mysterious death. Only 500 copies were printed, but Poe considered it as his best work and the keystone of his oeuvre, after which he had nothing more to write. And, indeed, this Eureka is one of the the most intriguing and prophetic scientific and philosophical treatises in world literature.

It proves that Poe was a century and more ahead of his time, which explains why his contemporaries could not understand Eureka and even ridiculed it. But the fact is that Eureka contains more than 20 major philosophical and scientific ideas and concepts that are common knowledge today, but that were absolutely unheard of in Poe’s days. It includes the theory of the Big Bang and the expanding universe, and also ideas about a chaotic and cyclic universe, multiple universes, evolution of species, relativity and the velocity of light, the unity of time and space, and much, much more.

In the USA this Eureka was soon forgotten, and it was not reprinted until more than a century after Poe’s death. But in Europe things went differently, because of Poe’s incredible popularity there, after his work was discovered by French writers and poets like Baudelaire, Mallarmé and Verlaine. They translated his work into French, which was the common language of the European cultural élite, so already soon after his death Poe became popular all over Europe.

Also Eureka was translated by Baudelaire and published in 1859 in a widely read international cultural magazine, so it got a flying start in Europe when it was already forgotten in the USA. It was seen as a visionary piece by a genius, of which the true meaning would become clear sooner or later. In 1871 it was even officially forbidden in Russia, because of Poe’s revolutionary ideas, although his other work had become popular and very influential there.

Nevertheless Poe’s ideas about a completely different universe were firmly implanted in the European minds. And their time came after WWI, when the sciences of nature were completely revised, due to Einstein’s theory of relativity and the development of quantum physics. At least two scientists were inspired by Eureka: Alexander Friedmann (1884-1925), the Russian scientist who in 1922 published the mathematics for the dynamic universe, and Georges Lamaître (1888-1966), the Belgian scientist who in 1927 published the theory of the Big Bang.

Most probably also the famous American astronomer Edwin Hubble (1889-1953) knew Eureka, because he was a fanatic collector and reader of books on astronomy. It is interesting to note here that Poe, Friedmann, Lemaître and Hubble had similar military backgrounds and training: all four were experts in ballistics and explosives.

Nevertheless, in order to do justice to the real history of science, the Hubble Space Telescope should have been named the Edgar Allan Poe Space Telescope. Will NASA ever recognize Poe’s enormous contribution to space science, by naming a major space project, satellite or interstellar vehicle after him?

To the Dreamers I offer this Book of Truths: Edgar Allan Poe’s  lifelong quest for a livable world

The Art of Being Un-wired: Chapter Five

Locomotive whistles from Portland to Eugene