So, my editor, Tim Forkes, asked me if I was planning to write an article for Christmas and I let him know I would think about it. Having just read a friend’s post about Christmas memories I decided I would give it a go.

Christmas memories in the Moore house involved lots of decorating, a huge tree for the adults, a smaller tree for the kids, and clear instructions not to touch anything. My dad loved to entertain and had no problem leaving all the planning and work for my mom to do while he went off to work. No wonder mom always ended her holiday season with a massive migraine.

There was the time my younger sister Cheryl and I were playing tug of war with something in the living room while it was in the process of being decorated. When she let go of what we were playing with, I fell backwards and hit a window with the back of my head. The only thing keeping my head from going through was the wrapping paper my mother had taped over it. My sister and I spent the remainder of the afternoon waiting for our fate from dad once he came home.

Cheryl’s room was down the hall next to mine, and I could hear every word my father said before he took the paddle to her backside. I counted each smack and thought to myself, “Okay, I can handle six swats.”

When dad came into my room, he explained that because I was older, I should have known better and that what was about to happen was for my own good. Maybe that was what he felt he needed to say before giving me a baker’s dozen swats that I refused to make so much as a wince over. He could have at least given me the choice of the paddle or doing hard labor for the next six years to pay for the cost of replacing the window.

My father received lots of gifts from the families of patients he cared for as their doctor. There was so much “stinky cheese” we had a separate refrigerator in the garage for it. Our favorite gift was the chocolate chip cookies his office manager’s husband baked for us every year. They were one-of-a-kind cookies I have never come close to seeing anywhere else. As for the rest of the gifts bestowed on him, well they were for adults and not us kids.

One year I remember making my father laugh his ass off in front of a patient who came by to drop off a gift. It was a Saturday afternoon and he and I were the only one’s home. I was a junior in high school and my father and I were reading the Oakland Tribune when someone stopped by. I recently had surgery on my rear end for removal of a pilonidal cyst and was home recovering, so I was still in my pajamas and robe. However, whenever a guest came by, I knew better than to leave without first having been introduced to the visitor.

My father introduced me to the man and then said, “I have to apologize for my son still being in his pajamas. He recently had surgery and is home recovering during vacation.”

His visitor then turned to me and asked me what kind of surgery I had when I replied in a deadpan manner, “I had brain surgery, sir.”

Dad just about fell out of his chair laughing while the visitor suddenly changed expression from concern to WTF is going on here. My dad had to explain to him what type of surgery I had before telling me I could leave the room.

There were eight children in the Moore household and none of us went without gifts. My mom loved to shower people with gifts because she grew up poor and could remember what it was like for a child to live through a lean Christmas. She gave us gifts labeled from Mom, Dad, Mom and Dad plus Santa. However, that was not enough so each Christmas we opened a gift from our dogs, Perky and Rotar, and another gift from our cats Peanut and Nancy. Thanks to our pets, the Moore children always had plenty of socks and underwear.

Mom started shopping for Christmas in the summer during an era when no store considered early Christmas displays. She thought of everyone. Neighbors, dad’s colleagues, friends and anyone she could think of. Our milkman, gardener, mailman, UPS delivery person, and trash men were all on her list. Six packs of Christmas Coors were placed on top of the trash cans the final pick-up day before Christmas.

One Christmas Eve, she had a package to be picked up by UPS. She had her gift ready for her regular UPS guy when there was a knock at the door. When she opened it, she said, “You’re not my regular guy. Just a minute and I will be right back.” A few minutes later, my mom comes to the door with another gift she hurriedly wrapped for someone she didn’t even know.

Christmas Eve was huge at our house. Besides a traditional Christmas dinner with Turkey and ham and some sort of strange salad that usually sat on top of a leaf of iceberg lettuce and contained Jello, canned mandarin oranges, and cottage cheese. My dad’s parents would be there as would our God Parents and Aunt Dory and her sloppy kisses. As the years passed, there would be spouses of the older siblings and a lot of noise. However, we were all home at whatever time mom told us to be and to make sure we were, Grandpa provided us with the incentive by taking out his teeth for a few brief seconds. If you were late, you missed out.

It was also my youngest sister’s birthday on Christmas Eve which meant she had her time being showered with her birthday gifts. She saw herself as unlucky for having her birthday on that day and the rest of us reminded her how she was given gifts or cards filled with money from people who were not around to celebrate our birthdays. One thing it did mean was besides the regular haul of Christmas food, there was also pizza to be had as well as birthday cake on top of the pies cooked up.

The anticipation of Christmas did not always show in our annual family photo. You could pretty much guarantee one or two kids were in a foul mood and took it out on the camera. Another certainty was while the anticipation of what sort of bounty awaited us under the tree built over the weeks following Thanksgiving, the unwrapping of gifts went about as swiftly as a Hun invasion.

When it was over, there was a quiet calm in the Moore house, and it had nothing to do with everyone being worn out. There was one more Moore rule that had to be followed before going outside and enjoying our gifts. We each had to sit down and write our thank you letters to relatives. Letters had to meet mom’s standards and were placed in envelopes we addressed and sealed before setting off to enjoy what we thought was another normal Christmas.

Normal is only what we are used to but is not always a reflection of the norm of society. Growing up in the 60s and 70s in an insulated community far enough away from any of the strife or troubles of the day was in itself a gift and not necessarily normal. Once I moved away from home and got to know others who grew up under much different circumstances, I realized just how fortunate I was. It did not mean we did not have our share of challenges and childhood traumas, it’s just that ours were not always like what others experienced.

In the end, I came away with a lesson our parents always tried impressing upon us, being mindful of others, especially those less fortunate than us. Giving a gift to someone you know and care about is easy to do. However, giving to others who have less reason for joy at this time of year goes a long way to making them feel noticed. It restores their faith in people when often they have plenty of reason not to have any.

The gift of giving is free, and it is simple. Sure, if you have the good fortune to be blessed with money, you can always donate to a cause or organization. However, giving can be as easy as letting that older person behind you in the checkout line move up in front of you. It can involve doing a good deed for a neighbor in need, holding open a door for someone with a walker, or consciously passing on that prime parking spot knowing someone else can use it more than you.

Giving simply means recognizing the value of all others and doing for them as you would hope is done for you if the situation was reversed. And the best way to thank others who give to you is to simply pay it forward.

As it turns out, maybe it is not such a bad thing stores begin their Christmas displays in the summer. Christmas does not have to be a day or a season. Every day can be Christmas if we each make a concerted effort to give of ourselves, whether in big or small ways, to others. Maybe next year will be the year we will all be more mindful of the joy and good fortune that can come from embracing the gift of giving the year round. 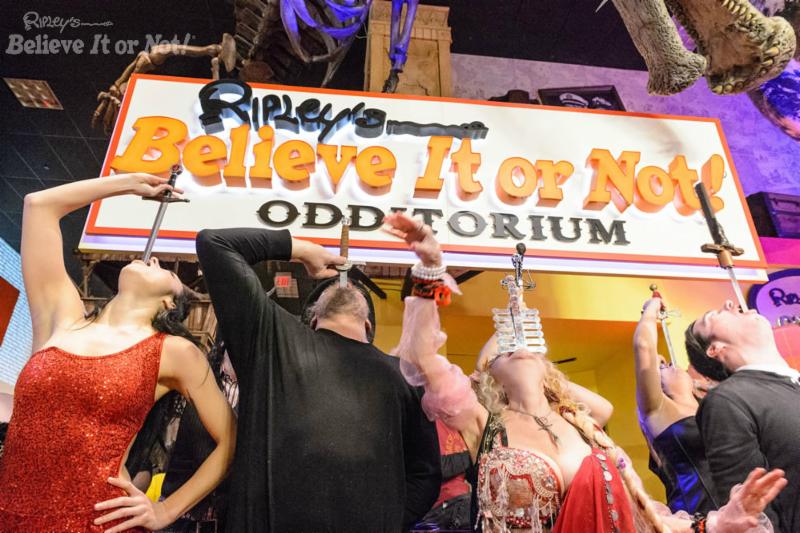 Ripley’s Believe It or Not! Celebrates the 10th Annual ‘World Sword Swallower’s Day’