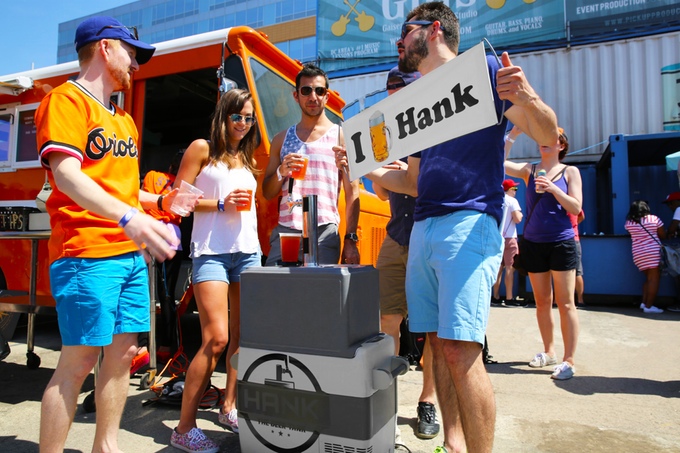 Recently on a warm spring day, I had the opportunity to meet Hank. Hank is really good at giving me beer, so I like Hank. But Hank is not a person. Hank the Beer Tank is a Kickstarter project from Sebastian Ehreiser and Adam Koeppel.

The problem: Draft beer is delicious, but is not portable.

First attempt: Let’s put in a growler! – this is a great idea if you don’t want the beer to last more than a couple of days, and you aren’t sharing with more than 1 or 2 people.

Second attempt: I’ll buy a keg fridge! – this is a great idea, but now you are tethered to your home. 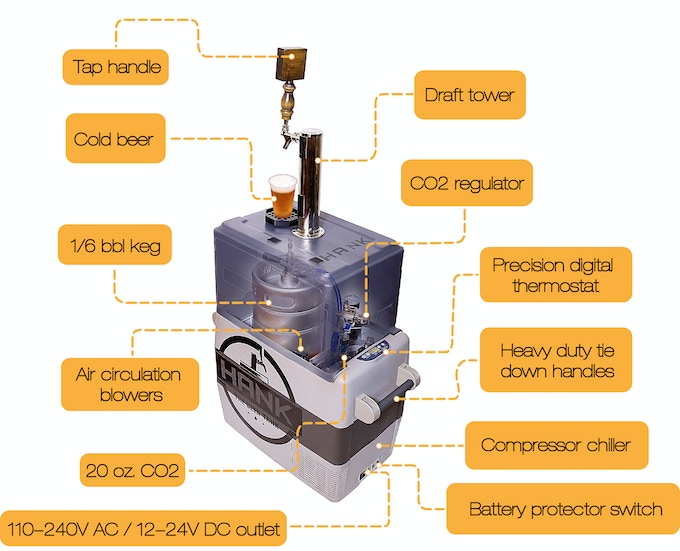 While there is some truth in that statement, it is not completely accurate. Yes, $700 is a commitment. But you cannot get a portable refrigerator from Target or anywhere else for that matter. What you can get for about $100 is a thermoelectric cooler. This is NOT a refrigerator.

What you are getting here is an honest to goodness compressor driven refrigerator (and freezer if you want) that runs off the most common forms of power available at home or on the road.

For those of you that think $700 is too expensive? I challenge you to find a portable refrigerator cheaper. The only thing that this is missing is a second lid so that it can be used as a more traditional camping refrigerator.

The product is a well-made product, that does exactly what it promises. And barring supplier issues, its one of the rare Kickstarter projects that should be able to deliver on time. The question is – is this product for you? I am going to attempt to list who it would be great for.

Homebrewers – homebrewers tend to brew using 5 gallon soda kegs. And homebrewers like to share their creations with others. This would be perfect.

Commercial brewers / beer distributors – These guys have dozens of festivals each year where they rely on jockey boxes, which offer them no control over the temperature of their beer. Jockey boxes, if you aren’t making your own are quite expensive too.

Campers / Off road Enthusiasts – Nothing better at a camp site than a nice cold beer. If you backpack camp this isn’t going to be your thing. But those that car camp it can be quite useful. Especially off road enthusiasts who tend to large groups camp together.

Boat owners – Easy access to beer dockside is great. Especially when you don’t need to worry about broken glass getting into your flip flop.

Event Venues – image catering a wedding that had a beer station almost wherever you wanted to setup? You can do it with this. If you only need to serve for an hour or so, you really don’t need to keep it plugged in.

My guess is, if you are reading this, you fall into one of these categories. I know that the price might be a little shocking at first, but do some research, you’ll find it’s quite a bargain. Being a person that has owned a similar fridge (mine won’t hold a keg) for a few years, I couldn’t be happier.

Check out their Kickstarter here.

What is Mitragyna Speciosa and Why Is It So Controversial

Things to Do Before Getting a Student Loan

Fruitcake: Guests will love these recipes