Burn-In is a techno-thriller that follows the story of a hunt for a new kind of terrorist, through the streets of the Washington D.C. area. (Image by Pixabay)

BALTIMORE — Is artificial intelligence (AI) – the “brains” behind legions of working robots – a benign automation advance which will increasingly simplify our lives? Or is it the ultimate technological trapdoor that could lead to a future far worse than anything George Orwell could have ever imagined? To understand our present predicament, we spoke with Futurist, Cybersecurity, Technology and National Security Expert P.W. Singer. Singer (along with fellow writer August Cole) are co-authors of the new book, Burn-In: A Novel of the Real Robotic Revolution (2020 Houghton Mifflin Harcourt)

BPE: Please tell us a bit about Burn-In and its relationship to what is now happening in Washington D.C. 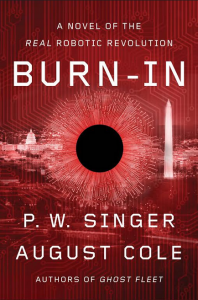 Singer: Burn-In is a new kind of book. It’s a fusion of novel and nonfiction, so it is a techno-thriller that follows the story of a hunt for a new kind of terrorist, through the streets of the Washington D.C. area. But baked into the story are over 300 explanations and predictions of everything, from how we work today and what will be the applications of face recognition technology, to larger questions and dilemmas that will hit everything, from politics to business to law; even family life. And it comes with 27 pages of research end notes to show this is not just imagination – this is all drawn from the real world.

BPE: How is this playing out in the world around us today?

Singer: Relevant to recent events, I think there are two ways that are of interest. The first is that all of the tech trends were already in motion before the pandemic, but they’ve been drastically accelerated by it. So, there are some areas where we’ve reached a level that wasn’t planned to be for years.

One example is telemedicine. We jumped ahead to where the industry thought it would be 10 years from now – in a matter of weeks. Other areas were with distance work and distance learning.

You see robotic systems moving from concept and prototype to deployment. As an example, the opening scene of Burn-In has a seemingly futuristic delivery robot driving down a sidewalk. That’s already been deployed in Washington D.C. to do grocery delivery. Another scene has a delivery from a drone flying overhead. That too has already been deployed to do coronavirus sample deliveries from hospitals.

And then, you have the AI surveillance side of it, which again is something that was already planned but is moving well past our vision, in terms of tracking people on the individual and mass city-wide scale.

BPE: I was going to ask you how close we are to this new world that you picture in your book, but it sounds as if, in a larger sense, we are already there.

Singer: Yeah, the science fiction writer William Gibson had a statement about how the future is already here, it’s just unevenly distributed. And that is so true with what we portray in Burn-In in a couple of ways.

One is how we see certain little elements of the technology that might be in one place but not others.

But it also has meant that this roll-out has been a bit of a strange, uncomfortable experience.

BPE: And people everywhere are feeling this sense of unease?

Singer: Yes, and this is where, over the last couple of weeks, some of the more dystopian elements of the story have also come true.

There are scenes in the book, for example, of a militarized perimeter fence being thrown up around the White House, and one was actually put up at the exact location that we had it in the book. There’s another scene where a riot takes place around the base of the Lincoln Memorial, which we had painted as an ultimate dystopian theme. And of course, that also happened.

But even some of the scarier elements that we had painted as dystopian are playing out. I think that points to the value of the combination of research and narrative. You can surface and visualize things that sometimes are hard to talk about in a standard white paper or academic journal – to share it with more people.

BPE: In your previous book, Ghost Fleet, you demonstrated how an enemy – in that particular case, the Chinese – could wreak havoc on defense systems with embedded malware. How easy is it to hack AI for nefarious purposes?

Singer: What we explore in Burn-In is how you get the amazing new technology simply rewiring – not just the economy – but the city itself. And it’s not just about AI and robotics. It’s really about how the internet changed into what they call the Internet of Things.

The problem is, we’re recreating all of the mistakes that we made with the first wave of internet security. We’re not baking security in, and so we’re also creating these incredible vulnerabilities.

What we explored in Burn-In is essentially how a bad actor – in the case of our story, a terrorist – could go after these vulnerabilities and carry out cyber attacks that are not about entering crippling code that is encrypted in email but actually causing physical damage.

BPE: That would be an attention-getter. Was the addition of the ten plagues storyline incidental or might present day Bible believers make an apocalyptic connection?

Singer: The nonfiction goal is to show that there are all sorts of new vulnerabilities out there. And you can think of them and frame them in lots of different ways. Fiction takes that and turns it into a narrative. And in the story, you have a bad guy who is playing off of apocalyptic imagery and a thought. So, he’s aware of that fear and drawing upon it, and it is kind of creepy.

BPE: How did your field of expertise guide you in the creation of this narrative?

Singer: Both August Cole and I come out of the nonfiction world. But like every one else, we love a good story. The first thing we did with Ghost Fleet was try to recreate the field that we had grown up with, reading early Tom Clancy. You know; just being enthralled by it and how realistic Clancy’s novels felt.

That’s what drove us in the beginning, but because of how we came out of the nonfiction realm and filled Ghost Fleet with all of these insightful real world details, it ended up having a greater impact in the nonfiction world.

BPE: I remember hearing you talk about Ghost Fleet to a packed audience at the 2015 Air Force Association convention and being impressed that a book about the Navy had the Air Force attendees sitting on the edge of their seats. 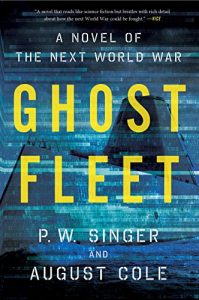 Singer: They may have been joking, but someone from the Army asked us, “When are you going to do an army version of Ghost Fleet?”

Singer: After our briefing, the Navy even named a $3.6 billion program “Ghost Fleet.” We were shocked by that. And so, with Burn-In, we tried to lead with the idea that there are these incredibly important issues that people need to understand, and they are issues that apply in all walks of life. These tidbits are packaged within a fun story.

BPE: Do you think that society will embrace these coming changes, or will there be a push back, and if so, who’s going to be doing the pushing back?

Singer: I think there will definitely be a push back, and we can already kind of feel a little taste of it. I think about it this way – on three levels.

The first is, you’re seeing a rewiring of the economy. And that has ripple effects on, not just jobs, but all that flows out of the economy. That transition is incredibly challenging for people.

The second challenge is the way new technology raises legal and ethical questions. Where can you use that new intelligent machine? Where can it not be used? How are the people behind it held accountable?

And then, the third is this idea of change happening so rapidly that you will see some people affected by it and lash out. Some people even who will fight change itself. And the fact that they’re taking place in an America that is more divided than ever makes it even more difficult for us to kind of weather the storm.

There’s a huge air of suspicion that has blanketed this country, and I’m not sure how quickly we as a society are going to get over that.

BPE: We know that the military is using artificial intelligence now. Is that the future of warfare?

Singer: AI is the future of everything.

AI is being applied into every single field that you can think of. It’s a key area for the US national defense strategy, and it’s also a key to China’s plan. China is open about that and say they want to be the world leader in AI by the year 2030.

AI is also accelerating in the business field. Pretty much every single fortune 500 company is plowing billions of dollars into it, and it’s not just the expected tech companies, you know, the Googles and Amazons. It’s also companies like Kentucky Fried Chicken, John Deere and McDonald’s.

This force is changing broader society.

BPE: Do you think the future looks promising or grim?

Singer: All authors – even those who write dystopian novels – are secret optimists.

Burn-In is partly a work of prediction but hopefully also a work of prevention. As an author you write it, and even with the most dystopian themes playing out in the narrative, the hope is that some parts of it will not come true – including because of what you wrote.

To go back to the Ghost Fleet example, there are things in that book that won’t happen now because of the book, and we’re glad about that.

By seeing vulnerabilities that are exploited in our novel, we brought awareness to those important issues. There were even investigations in both the Defense Department and the GAO, partly because of Ghost Fleet.

For the reader, even the most dystopian story is one of a character’s perseverance on their personal journey. So whether it’s Hunger Games or whatnot, readers can grasp the idea of power through perseverance. To me, that may be one of the most important lessons. That no matter how dark the world can turn around us, we actually can be the heroes in our own story. 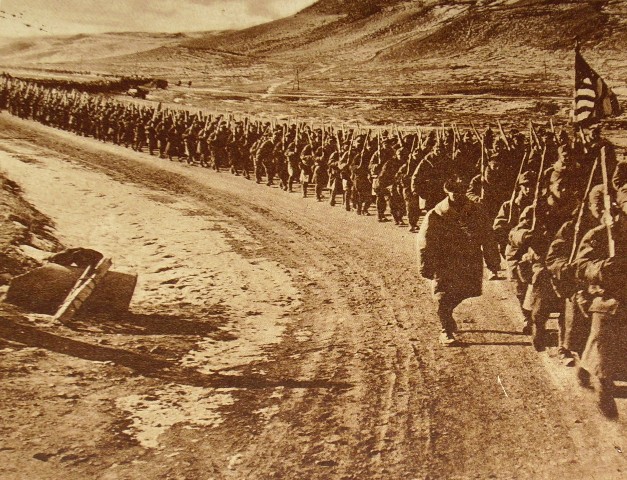 Libby O’Connell: World War I legacy, ‘The peace to end all peace’

Gridlock: All or nothing politics