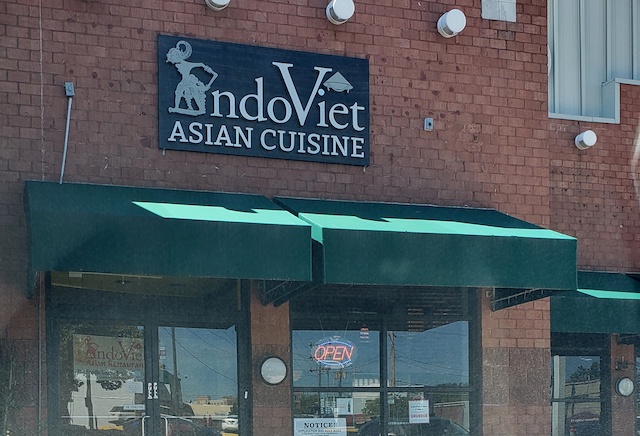 I consider myself the pho queen, an obsession that started numerous years ago when Chef Hoang opened a pho carryout on York Road. To the best of my recollection, it was the first pho to hit the Baltimore area. Over the many years, pho restaurants have grown around the county and in Baltimore City but IndoViet is the first for Pikesville, located in Club Center off Reisterstown Road.

In 2013, I ate at every pho restaurant in the area to determine the best of the best. Since then, some have disappeared and some remain. On my first taste of IndoViet’s pho I have to give them street creds for a tasty broth and generous portions of meat.

Amy Nguyen, the part-owner of IndoViet, is a former owner of Indochine in Mt. Vernon. She is a second-generation restaurant owner and bringing Vietnamese dishes along with other Asian based dishes like ramen, Japanese and Korean versions, in one of the many of the Street Food Soup menu categories. There is also a Street Food Stir-Fried Noodles section.

Ms. Nguyen has been getting the word out through neighborhood websites that is how I learned the restaurant had opened. They have been open for a month. A quick pop in for pho-to-go also alerted me that they have a selection of Bahn mi sandwiches: meats, pickled vegetables, carrots, mayo on a heated custom made roll offering a nice crusty exterior.

My to-go small bowl of pho came with plenty of shaved round steak and tendon. Carryout pho is never as good looking as having that fresh piping hot bowl in front of you at the restaurant, hence no photo at this time. I do plan to go back to try their shaking beef, chili paste chicken and other selections on their diverse menu.

There is a second IndoViet which will be opening soon in Highlandtown in the former public library.

What Specs Do You Need To Play Mobile Las Vegas – Style Games?