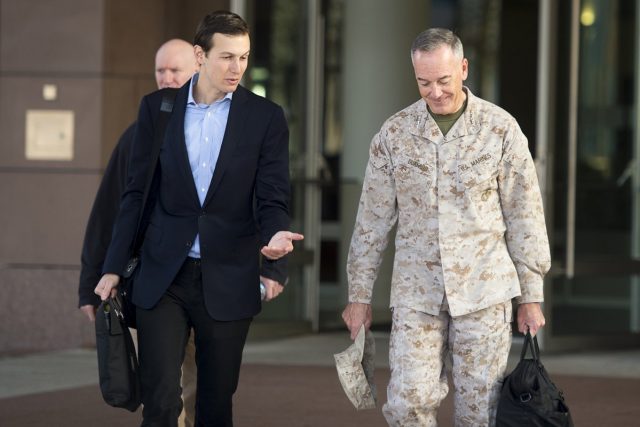 WASHINGTON- President Donald Trump’s son-in-law and close confidante Jared Kushner within the next month is expected to speak with Senate Select Committee on Intelligence staff members, according to sources that spoke with ABC News on Thursday.

Kushner has reportedly agreed to speak privately with Intelligence committee staff. There is no indication of a hearing at this point but Kushner in March said he would testify if called upon to do so.

Both the Senate and House Intelligences committees are investigating Russia’s attempt to manipulate the outcome of the 2016 U.S. Presidential Election as well as allegations of collusion between members of the Trump campaign and high-ranking Russian officials.

The Washington Post last month reported that Kushner in a December Trump Tower meeting with Russian Ambassador Sergey Kislyak and then-soon-to-be-and-now-former White House National Security Adviser Michael Flynn-proposed that off the record correspondence could be conducted in Russian consulates inside the U.S. The Post based their report on claims made by unnamed U.S. officials who said they had been briefed on reports related to the alleged correspondence.

Kislyak is believed to have rejected the proposal as it could have compromised the integrity of Russian communications equipment.

Flynn resigned in February following reports that he had diplomatically engaged Kislyak prior to President Trump taking office and that Flynn misled Vice President Mike Pence about that conversation.

Those reports suggested that Flynn may have given Kislyak the impression that the incoming administration might be willing to consider lifting sanctions that were imposed on Moscow following Russia’s 2014 annexation of Crimea, a Ukrainian territory.

Attorney General Jeff Sessions in early March recused himself from the Justice Department’s Trump-Russia probe following The Washington Post reporting that he had twice met with Kislyak while a member of the Senate Armed Services Committee.

Recently fired FBI Director James Comey on Thursday told the Senate Select Committee on Intelligence that Flynn was in legal jeopardy at the time President Donald Trump asked him to halt the Bureau’s probe into Flynn. Comey also told the committee that he authorized the leak of the existence of a memorandum documenting the February meeting in which Trump made that request so as to highlight the need for the appointment of a special prosecutor.