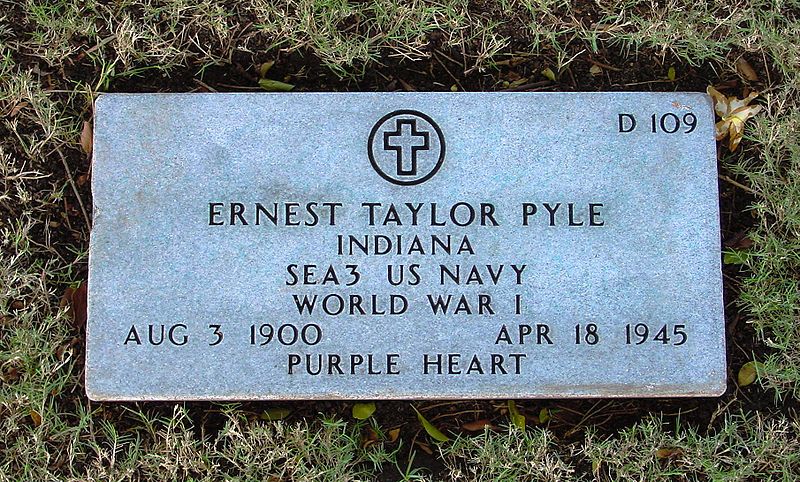 “There are no atheists in foxholes”
Ernie Pyle

BALTIMORE — Can a seasonal flu, and the lingering irritation it causes, change the course of a man’s life? One certainly did for a legendary war correspondent by the name of Ernie Pyle.

Pyle was comfortably ensconced at the editor’s desk of the Washington Daily News in the mid-1930s, when a bout with the bug forced him West for a period of recuperation. Returning to DC, Pyle sat in for vacationing columnist, Heywood Broun. There, Pyle penned a series of folksy articles about his health-fueled getaway, and the ordinary Americans he had encountered in his travels. Writing in this style, he soon garnered a nationwide audience.

It was this readership that followed the Indiana native across the globe during World War II.

“To me, the summer wind in the Midwest is one of the most melancholy things in all life. It comes from so far away and blows so gently and yet so relentlessly; it rustles the leaves and the branches of the maple trees in a sort of symphony of sadness, and it doesn’t pass on and leave them still. It just keeps coming, like the infinite flow of Old Man River. You could — and you do — wear out your lifetime on the dusty plains with that wind of futility blowing in your face. And when you are worn out and gone, the wind — still saying nothing, still so gentle and sad and timeless — is still blowing across the prairies, and will blow in the faces of the little men who follow you, forever.”

Pyle was only 44 when he died on April 18, 1945. The beloved journalist was killed in action while covering the Battle of Okinawa.

How he ended up in Okinawa is part of the fascinating odyssey which still resounds in journalistic circles, even as his name fades from the collective mind of modern readers.

Ernie Pyle first came to notice in the early 1920s as a reporter – and later as an aviation columnist – for the Washington Daily News. In that capacity, he traveled some 100,000 miles by air – an amazing feat for any passenger in the nascent years of commercial aviation. His high-flying jaunts even impressed the free-spirited Amelia Earhart. And he was often joined by his wife “Jerry,” who he affectionately referred to as, “That Girl who rides with me.”

“Some day I’d like to cover a war in a country as ugly as war itself.”

Pyle crossed the pond in 1940 and spent most of the war years overseas. He reported from London during the Battle of Britain; from North Africa during the early campaigns of the war; from Italy’s agonizing Anzio operation; and from the hellish beaches at Normandy. He returned to the states twice, to decompress from the mounting stress of the war – the second trip being spurred on by fatigue, his wife’s ill health, and a near-miss during the accidental American bombing of Saint-Lô.

Readers of his dispatches usually saw the war – not through the wire-rimmed spectacles of a jaded journalist – but through the keen eyes of the weary G.I.s, who would open up to him.

It’s true that Pyle was friends with such luminaries as Dwight D. Eisenhower and Omar Bradley. But more importantly – Ernie embraced the haggard infantrymen he encountered nearly every day.

Pyle never picked up a gun to fight the Nazis – that’s not what he signed up for. But he fought for the men in the field with a subtle grace aimed to inform an anxious nation. One prescient column inevitably led to an increase in combat pay – an act which became known in Congress as the “Ernie Pyle Bill.”

Ernie said of the men he championed:

“Their life consisted wholly and solely of war, for they were and always had been front-line infantrymen. They survived because the fates were kind to them, certainly – but also because they had become hard and immensely wise in animal-like ways of self-preservation.”

Pyle’s best-known story – “The Death of Captain Waskow” – was a year or so behind him, when he embarked for his final assignment in the Pacific Theatre. There, he battled a frustrating new enemy: a cadre of by-the-book Navy brass, who not only disliked what he was reporting but were determined to squelch his insightful, informal style.

“It may be that the war has changed me, along with the rest. It is hard for anyone to analyze himself. I know that I find more and more that I wish to be alone, and yet contradictorily I believe I have a new patience with humanity that I’ve never had before. When you’ve lived with the unnatural mass cruelty that mankind is capable of inflicting upon itself, you find yourself dispossessed of the faculty for blaming one poor man for the triviality of his faults. I don’t see how any survivor of war can ever be cruel to anything, ever again.”

After spending some contentious time at sea aboard an aircraft carrier, it must have been a relief for him to get back to covering the action on terra firma. On April 17, 1945, Ernie joined the landing of the U.S. Army’s 305th Infantry Regiment, 77th Infantry Division, on Ie Shima – a small island northwest of Okinawa.

A day later, Ernie Pyle was dead – the victim of a single Japanese bullet.

Ernie was photographed in repose where he fell, wearing the gear he took into the war: a steel Army helmet, his wire-rimmed glasses, combat boots and a regulation uniform beneath his wrinkled trench coat. A short time later, he was buried – still dressed as he was the moment that photo was snapped – between a combat engineer and an infantryman.

April 18 is both a difficult and an easy date for me to remember. And in my own way, I try to honor Ernie’s memory.

As a working journalist, I sometimes don my own War Correspondent’s uniform for flights in a B-17, a TP-40 or an SNJ-2. I also wear it for kicking about with scores of living historians at WWII-themed events up in Reading, Gettysburg, Carlisle, and Conneaut.

To some, that might seem to be an odd affectation, but wearing that reenactor’s uniform has opened up a lot of doors along the way. It has also closed a few doors, but that’s okay. In either case, I still think about Ernie.

About how a flu outbreak and a colleague’s vacation combined to open a new door for him.

About his dogged determination through peace and war to present the little guy’s story.

I also think about the immense responsibility which comes with being a journalist today.

Something has been lost since Ernie Pyle’s death, but you can’t actually see it, unless you forgo mindless blather and get back to where a man’s worth is still measured by his word.

Perhaps that’s the true legacy of Ernie Pyle — the lesson I take with me every day. Maybe it’s time we stopped screaming at each other and started listening to people, the way Ernie Pyle did.

“It’s alright to have a good opinion of yourself, but we Americans are so smug with our cockiness, we somehow feel that just because we are Americans, we can whip our weight in wildcats.”