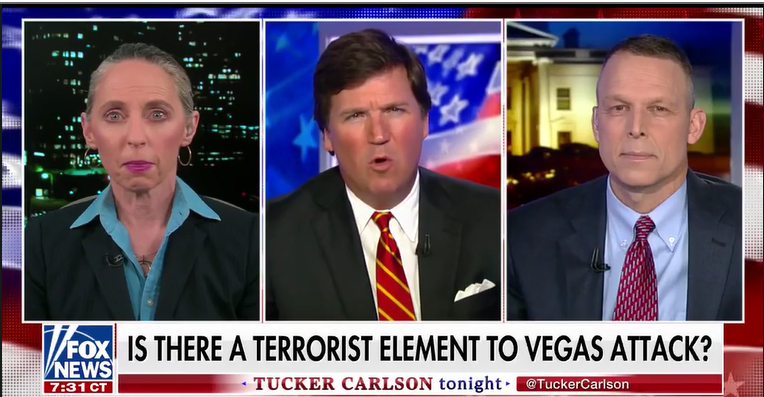 LAS VEGAS — On January 18 FOX News’ Tucker Carlson Tonight show aired a segment that raised the question if there was a terrorist element to the October 1, 2017 Las Vegas Massacre.

Catherine Lombardo, one of the attorneys representing victims of the Massacre and Congressman Scott Perry (R-PA), were guests on Carlson’s show.

Perry said that there was “evidence” that ISIS was involved in the Massacre that left 58 dead and over 400 wounded. He implied that had there been tighter security at the southern border of the US, that the massacre could have been prevented.

Perry said, “Recently I’ve been made aware what I believe to be credible evidence, credible information regarding potential terrorist infiltration through the southern border regarding this incident.”

Lombardo (no relation to Sheriff Joe Lombardo who runs the Las Vegas Metropolitan Police Department) addressed Perry and said, “Unless you have specific evidence to back that up it seems a bit irresponsible to make that allegation, so if you do have any evidence of that, I’m asking you right now to share it with us and tell us what that is.”

Perry’s response: “Well I’m not able to. I’m just telling you, I have received what I feel to be and believe to be credible evidence of a possible terrorist nexus and we’re going to wait until that situation develops.”

I wrote, “Perry should have put up or shut up. He had the opportunity on national television if what he said was true, to be a hero. Instead, he turned into just another zero politician. Shame on him, I’m sure the families of the dead appreciated that.”

Perry, who won reelection this year, told the PA Post in October that he stood by his comments on FOX News.

Then, on November 16 Politico published a lengthy article written by Keith Kloor, “Anatomy of a Conspiracy Theory.”

Kloor wrote that credible sources say the Las Vegas shooting was a one-man job, however a small band of former government insiders is propagating a wild alternative theory – with dangerous consequences.

He wrote that former CIA officer, Brad Johnson and former Pentagon official, Rich Higgins, belong to a small group of about a dozen members from the intelligence and special operations community who were pushing the theory that gunman Stephen Paddock’s rampage was part of a coordinated anti-Trump plot involving the Islamic State and Antifa, or left-wing activists.

“The idea sprang from the twisted, feverish mind of Infowars’ Alex Jones after the Vegas attack,” Kloor said.

Kloor points out in his story that Rich Higgins, who served for a few months in 2017 in the White House as director of strategic planning for the National Security Council, was the same Rich Higgins who got tossed off the NSC for writing a controversial memo warning that “Islamists,” “globalists” and the “deep state” together were trying to subvert Trump’s presidency.

According to Kloor, a month after the Las Vegas Massacre, Johnson, Higgins and a handful of associates collaborated on a 51-page PowerPoint document based, according to its executive summary, on “open source information with tactical counterterrorism analysis, cyber intelligence, and digital data mining capabilities.”

Kloor stated that Higgins and Johnson told him that they sent the document to the CIA, FBI, conservatives in Congress and the media.

“However, nobody with any real standing has taken the document seriously,” Kloor wrote.

The document authored by Higgins and Johnson argues that Paddock was likely killed by another collaborator in the room with him because it was an operation gone bad.

In several of the 125 plus articles that I have authored for the Baltimore Post-Examiner on the Las Vegas Massacre, I have laid out what I believe to be a convincing conclusion, based on lock interrogation reports, crime scene photographs and LVMPD police officer body-worn camera video, that Paddock was alone in rooms 32-134 and 32-135 of the MGMRI owned Mandalay Bay Hotel, during and after the gunfire and that nobody left either room during that time.

Kloor notes in his story Congressman Perry’s appearance on the Tucker Carlson Show in January.

“Even as there appears to be no evidence supporting Higgins and Johnson’s theory, it is having alarming real-world effects. At least one member of Congress whom Higgins says he briefed about the theory appears to have parroted its contents on television,” he wrote.

Kloor says that Higgins told him that Perry was one of about a dozen Republican members of Congress that both he and Johnson briefed about the Vegas theory and that Higgins briefed Perry himself.

I have been covering the Las Vegas Massacre for the Baltimore Post-Examiner since October 1, 2017.

I have heard it all.

The fringe element came out of the woodwork, forgetting about the families who lost loved ones, the over 400 who were wounded by Paddock’s gunfire and other survivors, all who will be carrying their emotional and physical scars with them forever.

These are some of the same people who said at the start that Mandalay Bay Security Officer, Jesus Campos was not a real security officer and was an illegal immigrant, spreading hate and discontent throughout social media and on radio programs calling themselves independent investigative journalists, spreading absurd and unsubstantiated garbage.

One lone crazy white man was the only person inside Mandalay Bay Hotel Rooms 32-134 and 32-135 during and after the gunfire.

Nobody exited either one of those rooms unless they flew out one of the broken windows.

With that, I’m still not convinced that nobody else had knowledge of the attack before it was executed.

The Las Vegas Massacre should never have happened. It was foreseeable and preventable on many levels.

It will go down in the annals as the most catastrophic failure of a response to an active shooter incident by police officers and armed private security personnel who were just feet away from Paddock’s room while he was firing and failed to take any action to stop, disrupt or distract Paddock.

That inaction, by an armed group of eight officers no less, possibly caused further loss of life and injuries that night.

We have attached a link to the Politico Magazine story.

On Tuesday the Baltimore Post-Examiner requested comment from Congressman Perry’s office. They did not respond.

Workin’ the Tease: MICA kicks off upcoming exhibition with fundraiser at Area 405