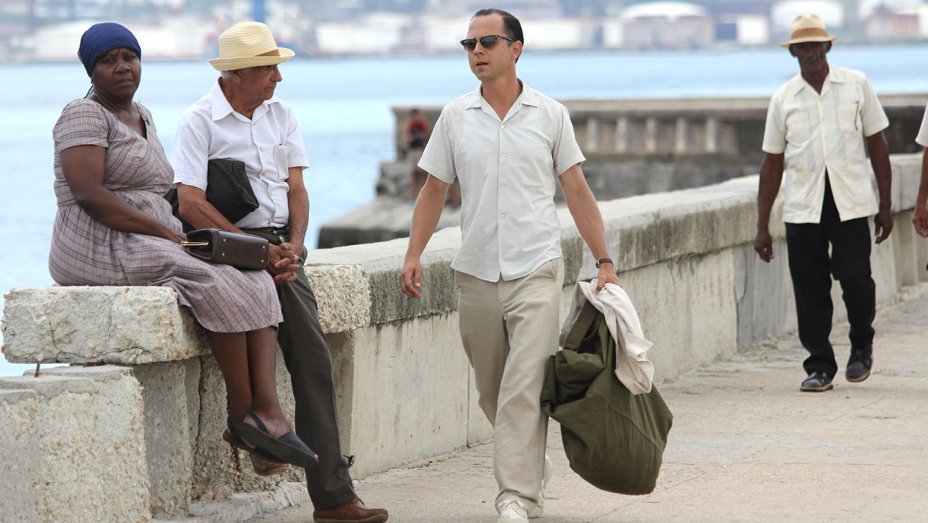 Cuba is on my bucket list. I’m a big fan of Ernest Hemingway. And, the newly-released movie Papa: Hemingway in Cuba looked very intriguing. So, I pulled myself together and traveled Northeast, out of Baltimore, to the AMC Theatre, located in the White Marsh Mall.

At the outset, the film, a drama, could have used some selective cutting. Still, I’m giving it a high recommendation, particularly to literary buffs and Hemingway aficionados.

The plot is told from the point of view of a Miami, Florida-based journalist, Denne Bart Petitclerc. He also wrote a successful non-fiction book with the same title as the movie. 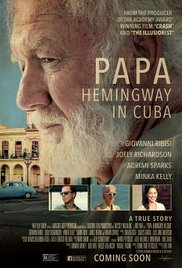 I found the back story on Petitclerc, for movie purposes, a little too long. I thought: Who cares about his writing career and/or his then girlfriend at a Miami tabloid? The screenwriter should have handled all of that in a cut-to-the-chase fashion. It was more than enough to know Hemingway was a cultural icon to Petitclerc, and that he latter evolved into a father figure for him.

Petitclerc’s role (Ed Myers in the movie) is played by Giovanni Ribisi. At times, he was a little too stiff. However, Ribisi, though no Johnny Depp, was still good enough overall to get the job done in a credible manner.

The central figure is, of course, Ernest “Papa” Hemingway. He’s 59 years old at the time. I think Adrian Sparks was just right as the bigger than life author with the mega, but ultra-sensitive, ego. He carried the film. First, Sparks looked the part and, secondly, he had the acting range to show some of the nuanced sides of the failing Papa. The story was set in Havana, Cuba, in the late 50s.

The right-wing dictator General Fulgenico Batista was then hanging onto his power by a thread. There was one bloody scene in the capital city, that revealed exactly what it was like to live under a fading-Fascist regime. Hemingway’s sympathies, a la the Spanish Civil War, were decidedly with the emerging rebel forces.

The film was shot in Havana, and environs. Hemingway’s estate, Finca La Vigia, a beautiful space located 15 miles from Havana, is now a museum. It was utilized for much of the filming.

The movie captured the essence of the complex figure that was “Papa” in his declining years. A roaring drunk, often mean, who was in decline both intellectually and physically. Suicide, which took his father’s life, was never far from his mind. You see enough of Papa’s “dark side” to know that he was a deeply troubled soul.

Papa’s long-suffering wife No. 3, Mary Welsh Hemingway, was played superbly by the British actress Joely Richardson. She was a bitchy, nagging wife, when called for. Mary also came off as a “hottie” in some of the swimming pool scenes. In one party at the estate, she also took on skillfully the persona of a Marlene Dietrich.

Some of the insults that the sharp-tongued Mary delivered to Papa, in the company of his closest cronies at the estate, were enough to drive a sensitive dude, like the novelist, to self-destruct and/or pull out his gun and shoot her! Mary liked her booze, too.

Shaun Toub is the poet Evan Shipman, in the film, one of Papa’s genuine friends. Toub, an Iranian, is one darn good actor. He gives a compelling performance in a supporting role.

The Mafia plays a bit part in this movie, along with the FBI, and its long dead director, the much-feared J. Edgar Hoover. The musical score was nothing to shout home about, but the cinematography gets two thumbs up. I was hoping also to see my blue and white ’57 Chevy Bel Air make a cameo appearance on the streets of Havana, but no luck on that one.

The scenes between Papa and Myers were often moving when the famed novelist was the focus. This was particularly true, near the end of the film. Lots of good one-liners, too, in this flick.