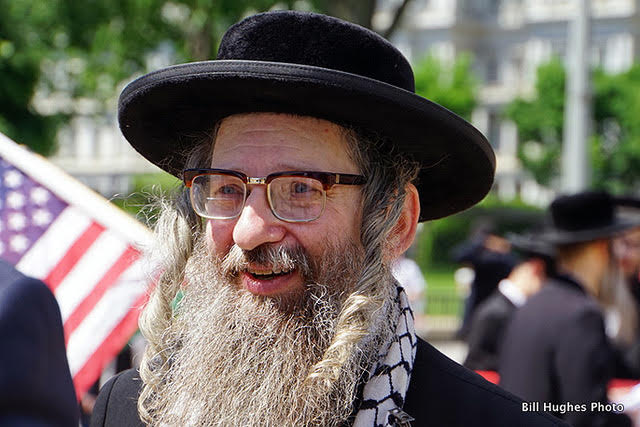 A delegation of 14 Orthodox Jewish Rabbis, who oppose the ideology of Zionism, rallied in front of the White House Wednesday morning to welcome the Palestinian President Mahmoud Abbas to town.

He was meeting at that same time in the White House with President Donald Trump.

In a written statement, the delegation’s leader, Rabbi Yisroel Dovid Weiss, said they were glad the meeting was taking place. He added: “We hope a way will be found to bring an end to the decades of bloodshed that the Zionist occupation has brought upon the entire population of Palestine, Jews and Arabs alike.”

Rabbi Weiss continued: “We Jews wish the American and Palestinian presidents the utmost success.” The Rabbi’s delegation is part of “Neturei Karta International,” a worldwide community of Orthodox Rabbis.

Check out the background information.

Support for Israel in the U.S. Congress, however, is probably at its highest level – ever.

Although, it’s only fair to point out that within the U.S. Intelligence, patriotic and military communities, there is still some lingering resentment over Israel’s attack on the “USS Liberty” in 1967, and the notorious Jonathan Pollard spy scandal in 1985.

Getting back to Neturei Karta. It opposed “the establishment of… the state of Israel.” It also believes that its moral, legal and spiritual opposition to such an entity is supported by the “Torah and authentic unadulterated Judaism.” It further argues that “the entire concept of a sovereign Jewish state is contrary to Jewish law.”

>At the moment, Zionist Israel, under its Prime Minister, “Bibi” Netanyahu, is celebrating its 59th birthday as a state. The White House demonstration ended around noon without any incidents.

Sleep No More: Macbeth unlike you’ve ever seen

St. Patrick’s Day message: Skip the green beer and other bits of advice