UPDATE: The Nats lost 4 to 1 Friday in the first post-season game in Washington D.C. in 86 years. The Nats lead the series over Houston Astros 2 to 1.

The 2019 Major League Baseball postseason was marked by two very different storylines between the two leagues. In the American League, the playoffs advanced pretty much as everyone predicted, with some prognosticators proved wrong when the New York Yankees didn’t win the American League Championship Series. But there were really no surprises.

The Houston Astros had a much better pitching staff with arguably the two best pitchers in the A.L. In fact, Justin Verlander threw the third no-hitter of his career on September 1, his second against the Toronto Blue Jays. Both he and Gerrit Cole earned 20-win seasons (Cole 20-5, Verlander 21-6) and both had great ERAs: Verlander 2.58 and Cole 2.50. In the World Series Cole would start Game 1 and Verlander Game 2.

So when the 2019 Fall Classic opened at Minute Maid Park in Houston, Texas October 22, the National League champs were already in a hole — on paper.

In the National League, the Los Angeles Dodgers were the clear favorites, winning 106 games. Sure, the Atlanta Braves or St. Louis Cardinals might give Los Angeles some stiff competition in the postseason if the Dodgers faced them, but it was a foregone conclusion that whichever team that won the N.L. Wild Card game (the Milwaukee Brewers or Washington Nationals) had no chance of beating the Dodgers — on paper.

Dodgers manager Dave Roberts didn’t seem to take the Washington Nationals for granted. In a press conference before the Divisional Round of the playoffs he said anything can happen in a short series (five games) and the Nationals had come on big and strong in the second half of the season.

Those around the National League, reporters, and pundits, were very certain the Dodgers had that series in the bag. It might take four games, but they would win. They had Walker Buehler and Clayton Kershaw starting the first two games. Who did Washington have to start those first two games at Dodger Stadium? Patrick Corbin, who had given the Dodgers fits when he was with the Arizona Diamondbacks and Stephen Strasburg. Nationals fans should be forgiving of those who asked, “Who?” In May Claudia Gestro asked Roberts about facing Corbin.

Along with Max Scherzer and the rest of the Nats’ pitching staff, Washington did what many considered improbable and won that series in a thrilling Game 5 at Dodger Stadium that went 10 innings.

Let’s take a moment to remember the last National League team to win the Wild Card Game and go on to win the World Series: the 2014 San Francisco Giants. In those playoffs the Giants defeated the Pittsburgh Pirates in the Wild Card game, then the Washington Nationals in the 5-game Divisional round and the St. Louis Cardinals in the championship series. In five games, not seven.

Then they defeated the Kansas City Royals — another wild card winner that season — in seven games. S.F starting pitcher Madison Bumgarner was voted the World Series MVP. The Giants started every series on the road and managed to win it all, against all predictions.

After this season’s division round the Nationals went to St. Louis where it was thought, they could possibly win one game. They won two, starting with a superb performance by Game 1 starter Anibal Sanchez. The Nationals returned home to Nationals Park and did what few thought possible: they won two more, sweeping the Cards into their off-season.

When the unlikely wild card team made its way to Minute Maid Park in Houston, Texas, they had six straight wins under their belts. But, they would have to face the top two pitchers in the American League, and possibly all of baseball: Gerrit Cole and Justin Verlander.

The truth is no pitcher is invincible, no team is guaranteed to win it all. It’s why they play the games. Looking great on paper is all well and good, but the teams have to prove it on the field. Now the series is in Nationals Park and the pressure, if there is any, is not just on the Astros, it is on the Nationals as well. They can’t let their success in Houston take the edge off their gritty, disciplined approach at the plate and their great defense and pitching.

The Astros don’t feel defeated. Shortstop Carlos Correa said, after game two, “Not a lot of teams win 107 games a year, so this is a special team. This is not just some random team, so if there’s a team out there that can do it, it’s us.”

Third baseman, Alex Bregman who is 1-8 in this series, said, “Lot of baseball left in this series. We’re going to go to Washington with our heads held high. Ready to go and get after it. We’ve lost two games before. I remember when we lost three in New York and next thing you know we’re in the World Series in ’17. We’ve been here before.”

Then there are George Springer and José Altuve, neither of whom have slowed down their output in this series. Washington fans can expect both of them to make life hard for any Nationals pitchers.

All the Astros need to do is win one of these first two games and Gerrit Cole will take the mound once again. Is it possible for the Nationals — any team — to defeat Gerrit Cole twice, especially in the same series? As any manager will tell you, anything can happen.

Dave Martinez knows this. When speaking with his team on Wednesday he spoke about not being complacent. “Hey, we’ve still got a lot of baseball left. We’ve just got to focus on today and go home, rest and get ready to play and go 1-0 again. That’s been the message all year. We don’t try to get ahead of ourselves. These guys need to understand the focus on the here and now and do the little things. That’s what’s got us here. And we’ve got to continue to do that.”

The Astros are in a deep hole and the Nationals are two wins away from making history. The first time the franchise wins a World Series and the first Washington, DC team to win it since the 1924 Senators. 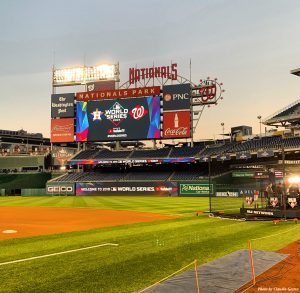 In Friday’s Game 3 the Nationals will have Anibal Sanchez take the mound. He pitched into the eighth inning, against the Cardinals in Game 1 of the NLCS, giving up just one run, excuse me, one hit. The Astros will have Zack Greinke pitching, who has had a tough postseason. He’s given up 10 runs in 14 innings.

This third game looks to be in Washington’s favor, but as anyone in baseball will tell you, anything can happen. The game starts shortly after 8 p.m. local time, 5 p.m. Pacific Time.

Below are the three video reports by Claudia Gestro from Houston.

One last thing: Juan Soto has been one of the major highlights of the Nationals’ season and postseason and today is his 21st birthday. This could be a birthday party of major proportions.

Rush Limbaugh and the liberals that made him