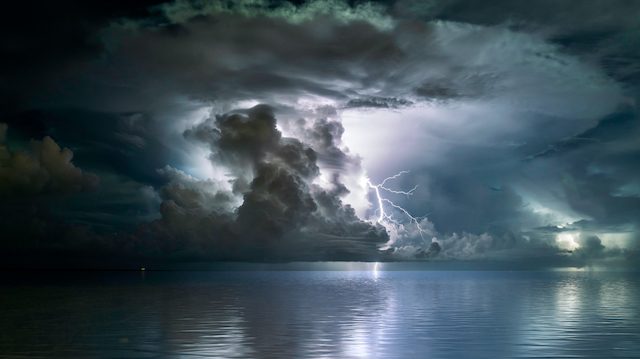 The perfect mushroom cloud storm over the sea. (Shutterstock)

The Fed is raising interest rates to suppress inflation.  Republicans in the House want to use a chainsaw to cut federal expenditures and reduce the national debt.  And then a major international or domestic crisis cuts consumer and corporate confidence off at the knees?  It’s the perfect storm for a serious recession.

For some time now, in previous op/eds[1], I’ve been trying to convince you that the Fed is hell-bent on reducing inflation even if raising interest rates – its only tool – results in hundreds of thousands, even millions of Americans losing their jobs.

Mind you, I like the Fed as a quasi-governmental agency that provides oversight for our banking system, but not as a maker of national economic policy.  Increasing interest rates raises the cost of money.  Inflation, on the other hand, is determined by all manner of different market forces the nature, implications and timing of which vary.  Raising interest rates is a gross tool that doesn’t appreciate these all-important micro-economic aspects of our economy.

The Fed is just making a mess, probably doing more harm than good, making decisions that affect millions of people’s lives, treating them like little more than numbers on a spreadsheet without knowing what it’s doing.  Making matters worse, they’re doing it as an “independent agency” without having to answer to the officials – the President, in particular – that we’ve elected to represent our interests.

In any case, despite the Fed’s best efforts, the jobs market remains surprisingly strong.  Ordinarily, that would be good news, but then the Fed isn’t done yet.

Yes.  Well put.  You’re getting the point.  And now, we have the Republicans in charge of the House.  Republicans believe that we have way too much national debt which is currently over 31 trillion dollars or approximately $94,000 for every American.  Multiply that average by four for a husband, wife and two kids and we’re talking serious levels of debt.  According to the Department of the Treasury, “As of November 2022 it costs $103 billion to maintain the debt, which is 11% of the total federal spending.”

The Republicans are right.  Our national debt is out of control in that the cost of maintaining that debt – that is, paying interest on it – is consuming too much of the total tax revenues that fund our government.  We’ve borrowed more than we can afford to pay back and are now incurring new debt to make payments on what we already owe.  That’s right.  Our government is funded by a Ponzi scheme which will eventually collapse like they all do.

Unfortunately, the Republican solution to reducing our national debt involves refusing to increase our debt ceiling and making large cuts in federal government expenditures.  Certainly, some of that is necessary, but not so much as to cause a recession.

What they should be doing – gradually, over time and with finesse – is increasing taxes collected from upper income individuals and larger corporations.  Republicans have trouble increasing taxes, not because they’re traditional conservatives who are pro-business, but because their campaigns are supported by the people and many of the companies whose taxes they dare not raise.

So, Republicans in the House that they now control are going to do their best to prove their power by restricting government expenditures – and that, ladies and gentlemen, has seriously negative implications for our economy.  Round numbers, federal government expenditures are currently 25% of total Gross Domestic Product.[2]  They are, in other words, a major source of employment and of the demand which fuels the American economy.

Right again.  The money question is, how much can our economy take?  We’ve got the Fed raising interest rates and now Republicans in Congress legislating to significantly reduce federal expenditures.  All we need now is a major international or domestic crisis to pull the rug out from under what’s left of consumer and corporate confidence.

I don’t know.  Putin, desperate to save his “big mistake,” does something really stupid in Ukraine to which the United States and NATO feel compelled to respond.  China, sensing an opening, a weakness in our being stretched too thin in too many different directions, moves on Taiwan.  Unusually high levels of disfunction in Washington.  Biden, heaven forbid, takes ill and becomes incapacitated.  Some form of January 6-style unrest.  Events like these make people and markets nervous.

Yes.  And there will be no stopping the recession which has self-feeding negative consequences all its own.

With luck, none of the strike three options will happen until the Fed throws in its towel – quite possibly because the market forces that have caused inflation in the first place are resolving themselves.  With luck, we make it through the 2024 elections with the Democrats keeping the White House and taking back the House – the Trump-era Republicans having embarrassed themselves into political oblivion.

Do I want any of this to happen?  Just to prove that I figured it out?  No, of course not.  In fact, I really don’t want to be right because a recession of any level, not to mention a serious one, will forever hurt so many families.  On the other hand, the Fed is out of control.  And so is our national debt and government spending that just keeps getting larger at an alarming rate.  And bad, bad strike three things have a way of happening precisely when they are the most troublesome.

I was raised to never point out a problem without having some, at least general idea of what a solution might look like.  So, just in case this typing fool is right, what can we do about it?

There’s nothing we can do about the Fed until we have a Congress that is willing to rule out the use of monetary policy for the purpose of making national economic policy.  And strike three crises are pretty much completely out of our control.

Strike two, on the other hand, is, in fact, something we can change by voting for the right candidates who will return control over the House to the Democrats.  And/or we can elect real Republican conservatives committed to traditional conservative principals of government and the bipartisan sharing of legislation with their Democratic counterparts.

Fair warning.  On a more personal level, start thinking about what a serious recession might mean to your family or business and plan for it – with the hope that it never happens.  Because it doesn’t have to.  But if and when the economy, battered as it is by outdated and unwarranted economic initiatives, finally does take a hit, you’ll be ready.  You’ll batten down the hatches, push through it with the rest of us and we’ll all be okay.

[1] “Using Monetary Policy to Fight Inflation,” “The Fed Fights Inflation” and “The Fed ‘Committee’ We Need to Do Something About.”

[2] According to Investopedia, “Gross domestic product (GDP) is the total monetary or market value of all the finished goods and services produced within a country’s borders in a specific time period. As a broad measure of overall domestic production, it functions as a comprehensive scorecard of a given country’s economic health.”  …Not to be confused with GNP (Gross National Product) which is GDP plus net income from foreign investments.