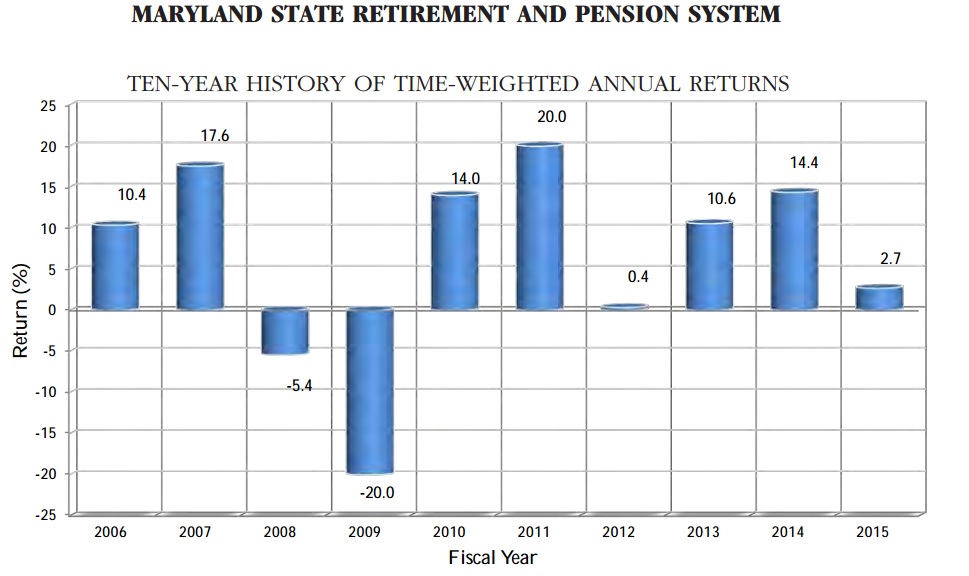 For the second year in a row, Maryland’s pension fund missed its target for return on its investment portfolio by a wide mark, earning just 1.16% for the 2016 fiscal year that ended June 30 compared to its annual goal of 7.55%. Last year, the fund made 2.68%.

Because of the lagging returns the $45.5 billion fund is apparently worth $300 million less than it was worth June 30 last year, and long-term liabilities are up over $20 billion. To match the pension promises made to state employees and teachers when the fund fails to meet investment goals, either the state or its employees must put more money in the fund, or benefits would have to be reduced in the long term.

In a press release, State Treasurer NancyKopp, chair of the Board of Trustees for the Maryland State Retirement and Pension System, underplayed the poor performance.

“While this is a very disappointing one-year return,” Kopp said, “it’s important to remember that we are long-term investors, meaning we should not be distracted by a single-year’s performance, whether the earnings are high or low. Over the last 30 years, including both good years and bad, the fund has earned an average return of 8%.”

Kopp had to reach back 30 years in order to capture the strong investment returns of the 1980s. The average investment returns for shorter periods look much worse, and none in the past 20 years come close to meeting the target of 7.55%.

Maryland still performed better than some large funds. Wilshire Trust Universe Comparison Service® (Wilshire TUCS®), a widely accepted benchmark for the performance of institutional assets, last week reported an average one-year gain of 0.91% for all funds. Wilshire saw an average 1.11% return for foundations and endowments with assets greater than $500 million

The California Public Employees’ Retirement System (CalPERS) with assets of $301 billion reported a 0.61% percent net return on investments for the fiscal year.