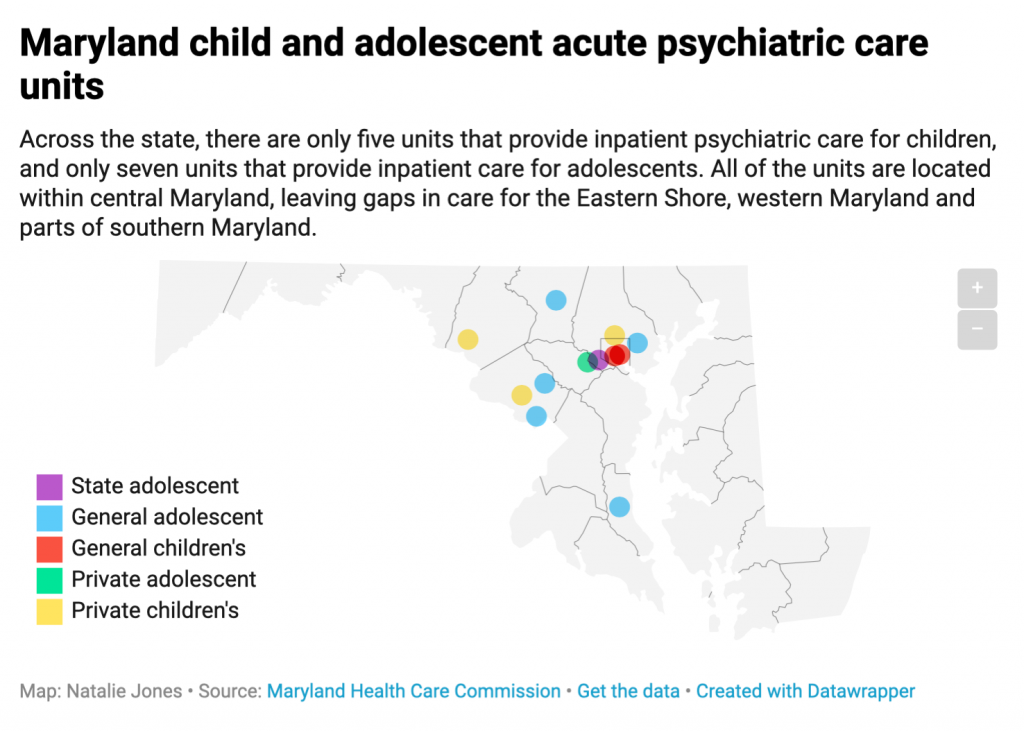 The first time Jeannine LeMieux’s daughter was hospitalized for a psychotic episode, she was only 8 years old.

LeMieux took her daughter to a hospital emergency room near her home on the Eastern Shore, where it was determined that she needed to be hospitalized. Her first admission was to Sheppard Pratt, a privately run psychiatric hospital with child and adolescent inpatient units in Towson, nearly a two-hour drive away.

“They didn’t do anything,” said her daughter, now 19. “I just remember a kid that smacked me in my face one time.”

To maintain the confidentiality of a minor’s medical history, LeMieux’s daughter’s name is being withheld.

Over the next 10 years, the daughter, diagnosed with post-traumatic stress disorder with ongoing psychotic episodes, depression, anxiety and later bipolar disorder, required hospitalization five more times, taking LeMieux across the Mid-Atlantic region, from northern Delaware to a brief move to Northern Virginia and back into eastern and central Maryland.

Traveling long distances to access inpatient psychiatric care is a familiar problem for the parents of children and adolescents living in rural areas, especially in Maryland, where 18 of its 24 jurisdictions are considered rural under state law and 25% of Maryland’s 6 million residents live within those areas.

Most juveniles who visit the emergency department for psychiatric reasons spend less than 24 hours there, but a growing number of children and adolescents are staying even longer as they wait in local emergency rooms for transfer to a more appropriate facility.

Across the state, there are 29 acute care general hospitals that provide inpatient psychiatric services for adults 18 and older.

Only five of those hospitals provide acute care for adolescents between 13 and 17, and only two provide care for children from 0 to 12 years of age, according to data from the Maryland Health Care Commission.

For children and adolescents living in the far-reaching rural areas of the state, general hospital acute care is even less accessible. Acute adolescent psychiatric units, which provide immediate short-term care, only exist in Montgomery, Calvert, Baltimore and Carroll counties, and both acute children’s psychiatric units in the state are in Baltimore City.

LeMieux remembers driving nearly 100 miles one way just to see her daughter for an hour or sometimes only 30 minutes.

“It’s terrifying to think that my mom had to go through that,” her daughter said. “It’ll make your anxiety a whole lot worse, knowing that the one person that’s normally there can’t be there and it’ll take a little bit for them to get there if you truly need them.”

“You want to go every single time that you can to see your child,” LeMieux told Capital News Service. “Family is key to helping a child get better.”

If there aren’t any acute child psychiatric beds within a 45-minute drive, any juvenile psychiatric patient may be admitted to a pediatric bed in a general hospital, according to Maryland state regulations. 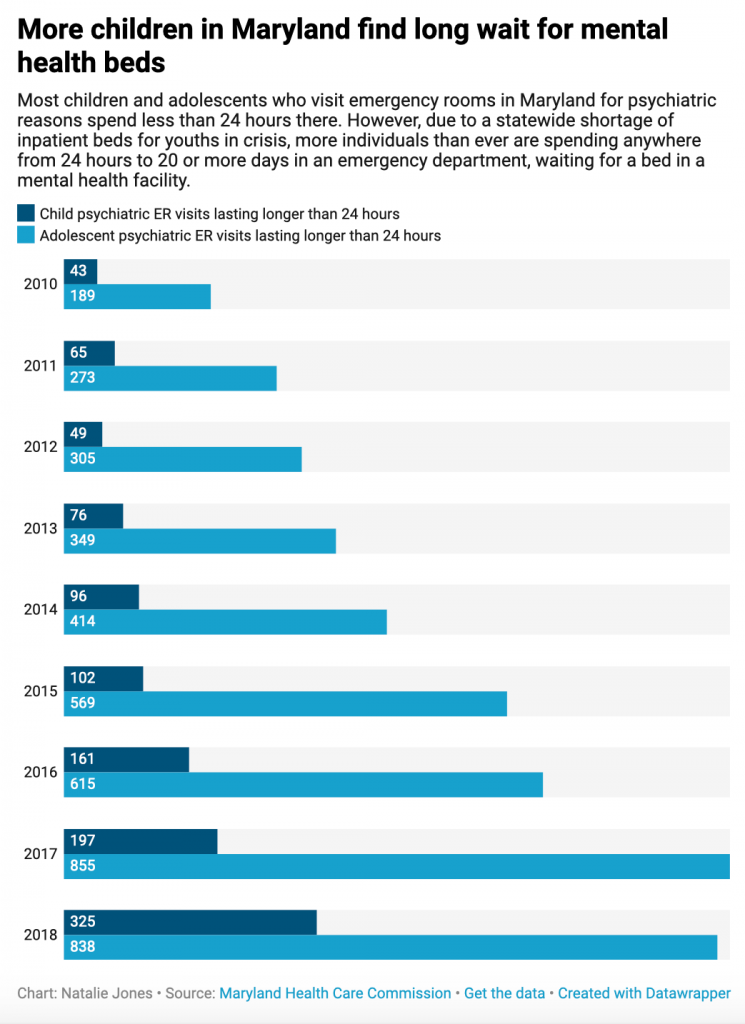 Hospitalized over 10 times in the last five years, Patricia Williams said, her daughter was often in enough crisis to be transported via ambulance or police escort to their local hospital in Cecil County, where she would then have to wait — sometimes 14 hours to up to two days — for transfer to an inpatient pediatric psychiatric bed.

General pediatric units don’t always have the staff or resources to be equipped to handle high-risk pediatric psychiatric patients.

Williams initially thought her daughter had only attention deficit hyperactivity disorder, but medication brought on drastic mood swings and hours of inconsolable crying. She said her daughter, who is not being named to keep her medical history private, first started hearing voices at just 9 years old, when she was in fourth grade.

“She pulled a knife on me one time and I had to call the police,” Williams recalled. “She punched her brother in the face.” 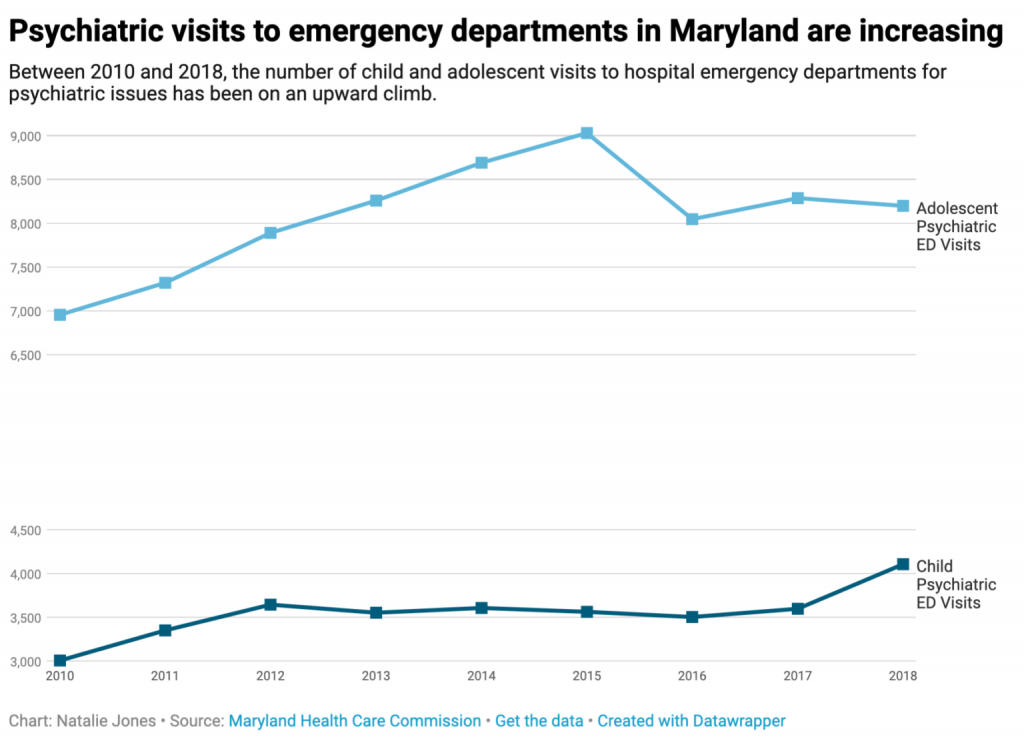 The lack of placement options across the state has caused “an alarming increase” in the length of wait times for younger patients, according to a Maryland Hospital Association report from 2017. At one facility not named in the report, some children were hospitalized more than 100 days past what was medically necessary while they waited for a transfer, a hospital leader said.

Juvenile patients being “boarded,” or kept waiting for transfer in emergency departments, are stuck waiting for days sometimes due to a shortage of open inpatient beds in the state, and an even greater lack of open beds for patients with specialized needs such as co-occurring developmental or substance use disorders.

The number of child and adolescent beds available in inpatient facilities in Maryland can fluctuate, with some units allowing overflow between adult and juvenile units depending on need.

Over the last eight years, the number of psychiatric visits to the emergency room for children and adolescents has been on an upward trend. Even though more children are experiencing crisis situations, the number of inpatient and residential treatment beds in the state for these individuals has declined, with several state facilities closing, along with the closure of an inpatient unit on the Eastern Shore.

Trips to the emergency room can be expensive on their own, but extended waiting in the emergency department for transfer and inpatient unit stays continue to rack up the costs.

A two-week inpatient stay for her daughter at Sheppard Pratt was $20,185, Williams said. Over the course of one year, her total hospital visits added up to $122,000.

Medicaid covered the costs for Williams’ daughter, she said, but for other children in need of psychiatric services, insurance doesn’t always cover everything. Co-payments due upfront, along with bills for other services not covered by certain insurances, can add up quickly.

Of those 12,304 juvenile visits, 1,163 of them lasted anywhere from over 24 hours to 20 or more days in the emergency department, waiting for a bed elsewhere.

LeMieux remembers her own longest wait time — over 30 hours — with her daughter at a hospital emergency room waiting for transfer to a psychiatric unit.

She had to wait in a windowless seclusion room with nothing but a bed, only being allowed out to use the bathroom, the daughter recalled.

“It kind of feels pointless, like I need help now but I’m not getting it,” the young woman said, thinking back to that time.

LeMieux, a registered nurse at a hospital on the Eastern Shore, said she doesn’t think the emergency departments themselves are at fault — there just are not enough units for psychiatric patients.

“We’re doing a mis-service to our adolescents on the Eastern Shore, in southern Maryland, all around,” she said.

Having kids in psychiatric crisis wait long times in emergency rooms for transfer to an inpatient unit with open beds is a reflection of a larger problem: a shortage of inpatient and community mental health resources in the state.

“The services in the community really need to be stepped up to where we cannot have as much need for inpatient stays,” Williams said.

When a child or adolescent with a psychiatric emergency in the state’s rural Eastern Shore region comes to a University of Maryland Shore Regional Health emergency department, the first step is to stabilize them. From there, the hospital will make the decision to release the patient with a care plan for further treatment or transfer them to an inpatient facility on Maryland’s western shore or in Delaware, according to Kate Gallagher, a member of the communications team for the Eastern Shore’s regional health system.

Although many general hospitals have to transfer younger psychiatric patients long distances to receive care, the state’s process for adding or expanding inpatient juvenile psychiatric facilities requires a long application and review process to ensure sufficient need and finances before beginning construction.

The review process, which grants a Certificate of Need and allows the establishment of a new psychiatric hospital or unit, hasn’t been updated in over two decades, according to Eileen Fleck, chief of acute planning and policy for the Maryland Health Care Commission.

Freestanding private psychiatric hospitals provide hospital-level inpatient care for pediatric and adolescent patients as well, but three out of the four facilities in Maryland are in non-rural counties. Two private children’s units and one private adolescent unit are in Montgomery, Howard and Baltimore counties, and only one private children’s unit exists in more rural Washington County.

Maryland provides one state-run psychiatric hospital serving adolescents in Baltimore County that mostly provides longer-term inpatient care and treatment for those involved with the state court system. There are no state facilities that accept juvenile psychiatric patients younger than 13.

“There is definitely a shortage and there are efforts underway to try and address the issues,” said Lara Wilson, executive director for the Maryland Rural Health Association. “We are not alone in Maryland with this concern.”

Ann Geddes, director of public policy for the Maryland Coalition of Families, also acknowledged that there’s “definitely” a shortage of juvenile psychiatric facilities in the state.

Geddes said that most facilities are not equipped for residential treatment, as their goal is to stabilize their patients over a few days and line up continuing care if necessary.

To combat the shortage and long transportation times, state rural health care officials have suggested using telehealth, which would provide remote patient care and eliminate the need to have doctors and specialists directly in rural counties in Maryland.

Telehealth uses two-way audio and video technology to monitor and deliver care remotely, along with securely sharing medical information. By using telehealth, the state has the potential to reduce high healthcare costs that come with office visits and in-person specialist appointments.

“Telehealth has been proven to be a way to address access for behavioral health services for adults, pediatrics and adolescents,” Wilson said. “However, the state does not reimburse for care delivered to a patient in their home setting. They are still required to go to a clinic site for telehealth encounters. This is not efficient and (is) a burden on families.”

The University of Maryland Shore Regional Health system received a $75,000 grant in 2017 from the Maryland Health Care Commission toward behavioral health assessments via telemedicine. The grant supported the purchase of technology such as telehealth carts, equipped with a camera and built-in microphone to see and communicate with patients, training for clinicians and support for researchers.

However, while the telemedicine program has reduced wait and travel times and increased satisfaction, it only serves adult patients for now, Gallagher said.

“We are actively working to establish tele child and adolescent psychiatric services with our University of Maryland School of Medicine colleagues,” she said.

Hogan: ‘Mass vaccination sites’ to set up throughout Maryland

Did Michael D. Cohen tell the truth in his opening statement?