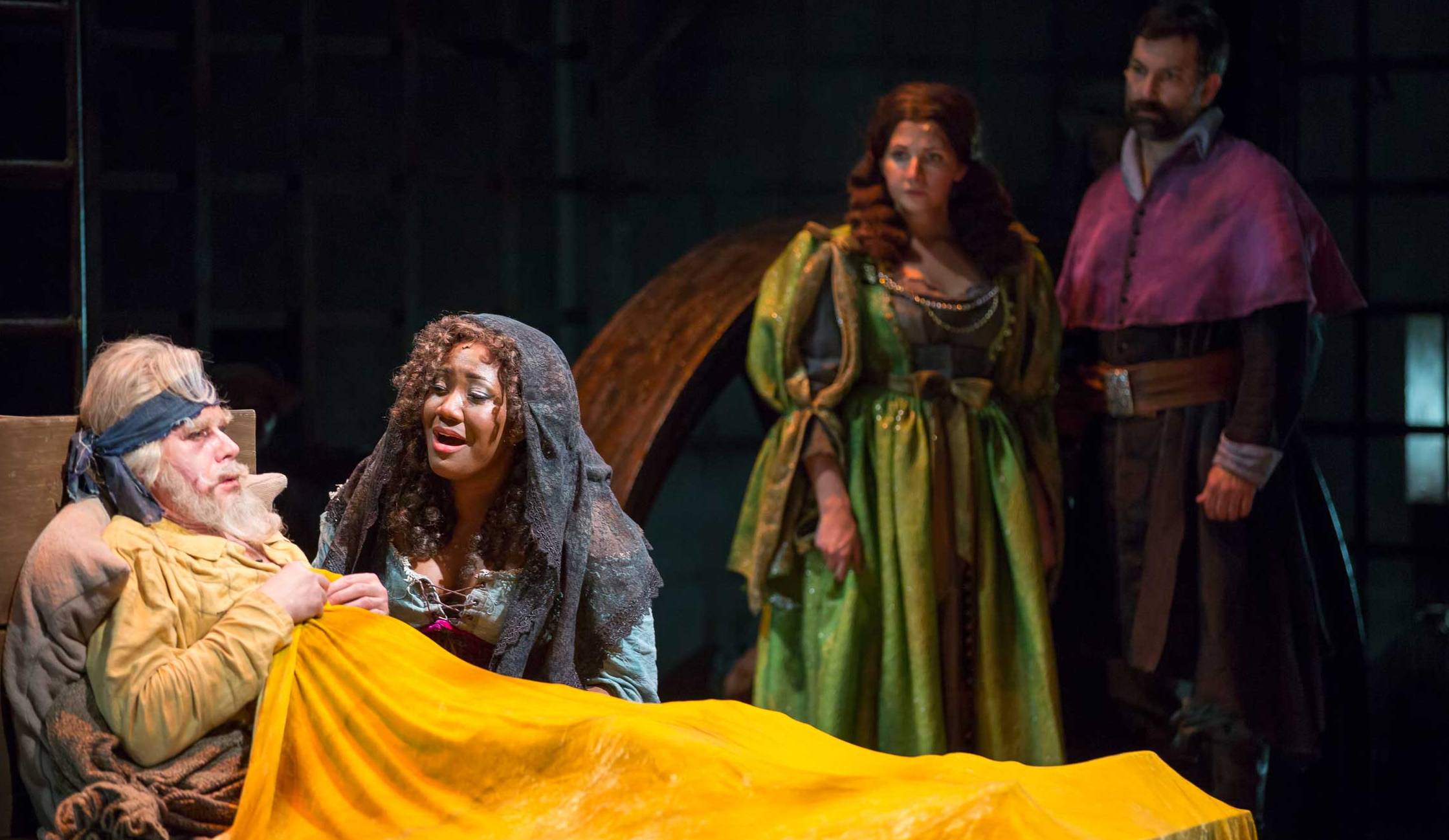 Is it possible for a single performer to nearly ruin an otherwise excellent production of one of Broadway’s most beloved musicals? The answer, unfortunately, is “Yes” – if the director foolishly decides to drop said performer’s preening present-day persona into the middle of the Spanish Inquisition.

This was the case on opening night of Man of La Mancha – the current production at Washington’s Shakespeare Theatre Company.

Directed by Alan Paul, Man of La Mancha is a tale of kindness, hope, and uncompromising chivalry in the face of inhumanity. Based on the novel Don Quixote by Miguel de Cervantes, and on a non-musical teleplay by Dale Wasserman, Man of La Mancha (lyrics by Joe Darion and music by Mitch Leigh) premiered on Broadway in 1965; winning five Tony Awards including Best Musical. A 1972 feature film starred Peter O’Toole as Don Quixote, and Sophia Loren as Aldonza.

All of the action in the play takes place in a prison in Seville circa 1594, and in the imagination of Don Miguel de Cervantes .

Poet/actor/tax collector Miguel de Cervantes and his servant Sancho Panza have been imprisoned for trying to foreclose on a monastery. Cast into a den of murderers and thieves, the two are subjected to a mock trial where they are nearly stripped of all their belongings – save for a trunk of theatrical props and a mysterious manuscript. When the “governor” of the rabble threatens to burn the manuscript, Cervantes begs to be allowed to plead his innocence (and thus redeem the manuscript) by enacting a fable of his own imagination.

In the fable, an old gentleman named Alonso Quijana is so racked by the injustice he sees all about him that he loses his mind. Alonso renames himself Don Quixote de La Mancha and, accompanied by his trusted manservant Sancho, sets out on a noble quest – an Impossible Dream. Along the way, Don Quixote will tilt at a windmill, do battle with a group of maiden-molesting mule drivers and fall in love with a prostitute/serving wench (Aldonza) who he mistakes for the lady Dulcinea. He will also impart timeless gems of wisdom, such as, “Don’t go looking for pleasure – it may find you.”

Owing to the familiarity of the play, even a fresh production of Man of La Mancha may come across as a bit threadbare. It seems like everyone has sung The Impossible Dream! Fortunately, the Shakespeare Theatre Company has pulled out all of the stops while mounting a mostly enjoyable evening of musical fare.

Australian Anthony Warlow is superb as Don Quixote (Cervantes). Warlow’s acting is thoroughly engaging and his pleasant voice offers an interesting take on a tune (The Impossible Dream) which (as noted above) has been done to death.

Nehal Joshi portrays Sancho – not so much as a dupe – but as an enthusiastic innocent. Joshi has some wonderful moments with his character, and absolutely shines in the numbers “I Really Like Him” and “A Little Gossip.”

Robert Mammana delivers in the menacing role of Dr. Carrasco. Ditto Ceasar F. Barajas, who does a crack job as the equally threatening Pedro.

Martín Solá provides a pleasingly subdued performance as The Padre. Solá is joined by Maria Fallia (Fermina) and Rayanne Gonzalez (Maria) in a nice rendition of “I’m only Thinking of Him.”

Nathan Lucrezio is a delight as the nervous barber Anselmo. And Dan Sharkey displays good range as the Governor/The Innkeeper.

The robust ensemble produces a sweeping sound one would expect from twice as many voices.  And all are terrific in a number of small, supporting roles.

Only Amber Iman as Aldonza is out of sync with this commendable cast. Regrettably, Iman blows into 1594 as if it’s 1954; creating an Aldonza who would be more at home in a Savannah nightclub than in a tavern in Seville. As the evening wore on, Iman slowly dialed her histrionics back, but the effect was still jarring whenever a scene called for a display of strong emotions.

Conversely, Iman does a fairly good job with some very challenging music. But even there, her singing style is at odds with classical music theatre.  What makes this particularly maddening, the producer’s implied they were trying to recapture the flavor of the original Broadway production, right down to running this nearly two hour show without an intermission.

Man of La Mancha runs for another month, so there is still plenty of time for both the actress and director to re-think Iman’s incongruous interpretation.

On the artistic side, Allen Moyer has designed a truly remarkable set, complete with a retractable staircase which screams “abandon all hope.”

Sound designer Ken Travis contributes to the desolation with noises which are usually reserved for a nightmare. Robert Wierzel’s lighting design adds layers to the set’s forlorn atmosphere, but goes awry when he implacably blinds the audience for a sword-fighting sequence toward the end of the play.

A special nod to Music Director George Fulginiti-Shakar and the solid musicians who accompanied the talented cast.

Shakespeare Theatre Company’s production of Man of La Mancha is a magnificent and moving show – with one glaring problem that absolutely should be addressed. Rectify that issue, and this is a production people will be talking about for years to come. 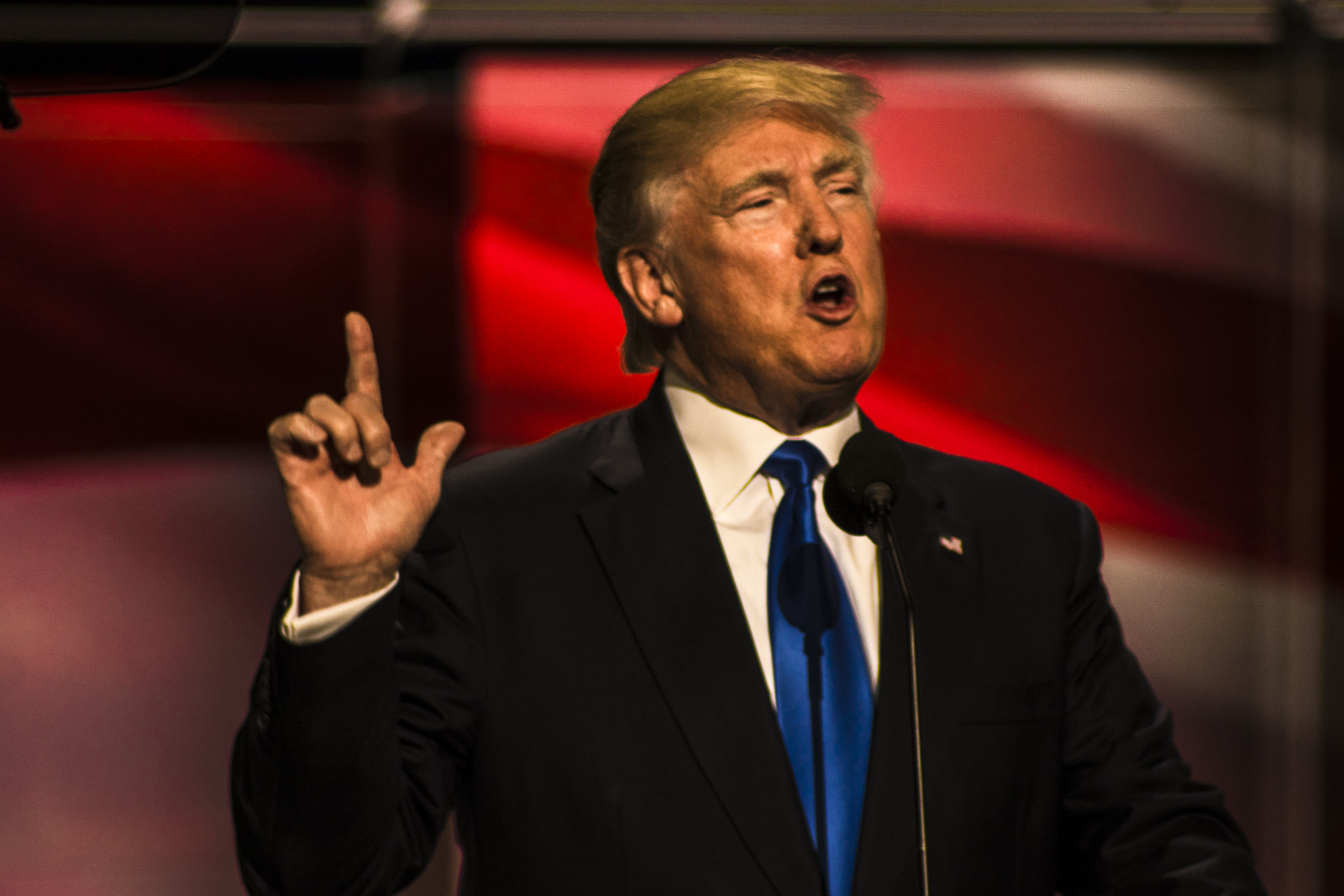 Does running as a pro-Trump Republican help or hurt in Maryland?

Montel Williams a coward? Not likely