George R. R. Martin – the award winning author behind the hit HBO series Game of Thrones – told a Baltimore audience the television show is licensed “fan fiction”. Martin also acknowledged that A Song of Ice and Fire is, “A giant monkey on my back”.

Game of Thrones is the first volume in Martin’s epic fantasy series, A Song of Ice and Fire. With a fictional medieval setting awash in warring kingdoms, bloody battles and castle intrigue, Game of Thrones has become an international sensation. It has also made the talented and outspoken Martin a household name. 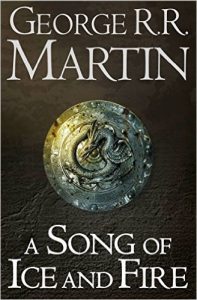 Now in its sixth season, Game of Thrones has used seven writers (including Martin) during the course of its run. Series creators David Benioff and D. B. Weiss are credited with writing the majority of the episodes.

Martin and Picacio refrained from talk about Game of Thrones for most of their time on stage, choosing instead to focus on another hot button topic: The politics behind Science Fiction and Fantasy awards. Both stated their belief that the selection process for most awards is hopelessly flawed, with Pacacio coming out in favor of some sort of a jury system. Martin remained unconvinced, saying it would never come to pass because no one in power wants to give up their vote.

The hour long conversation turned near the end of the session when Picacio finally asked Martin, “What part of Kong are you working on right now? What’s currently on your desk?”

The question drew a wave of knowing laughter from most of the audience, as Martin explained that ‘Kong’ is, “The giant monkey on my back”.

Martin replied that he is working on a new chapter, adding, “I still have a ways to go. I shouldn’t be here right now…” (More laughter)

At that point, Martin and Picacio opened the floor to the audience for 2-3 questions.

The first audience question was for Picacio, who was asked if he was related to Pablo Piccasso?

“I used to get teased in school because of the similarity in our names, but I tell people there is no ‘ass’ in Picacio. As I started to read biographies and study that guy – he was a bit of an ass. So no – we’re not related. But I’ll say this: He was one of the first modern artists who really built a brand for himself. In that way, I think he opened a door for people like me. All of us who are trying to make a career as professional artists have borrowed something from that guy.”

The second audience member then asked Martin, “As the Game of Thrones TV series moves farther away from the book, has this changed or done anything to your views on fan fiction?

“No” said Martin, “I continue to be opposed to fan fiction because it’s copyright infringement. HBO, of course, gets around this by paying me large dump trucks full of money. So, if you would like to arrive in front of my house with a large dump truck full of money, I may consider allowing you to do some fan fiction. But I won’t consider it fan fiction then. I would consider it a sub-license. I make many sub-licenses to people who do games and card games and coins, etcetera. But Harlan Ellison always had this rule that he has been very vocal about over the years. You can find his diatribe about it on YouTube: ‘PAY THE WRITER’. And I think John also feels (one must) pay the artist, because this is how we make our living.”

The next question, again addressed to Martin, was, “What are your thoughts about how the HBO adaptation is going now that it has surpassed the published material?”

“Well, you know, it’s the most popular show in the world. We have an amazing cast, an amazing crew, amazing writers. It would be hard to be any more fortunate than I’ve been in my partnership with HBO. Do I wish that they hadn’t caught up and passed me? Yes, I do. But that’s my own fault because I’m very, very slow. I write at my own pace. I’ve never been a fast writer and unfortunately I’m getting older not younger, which for some reason is slowing me down, rather than speeding me up.”

Picacio interrupted Martin and reminded him a conversation the two had when Martin first signed the contract with HBO.

“I asked you,” said Picacio, “With this big load of money they’ve paid you – what happens if they pass you? And you said even back at that time, ‘Then they can pass me. They would have that right at this point.’ You knew what was in front of you, and I think that’s kind of brave.”

“I worked in Hollywood a long time,” replied Martin, “so I know how it works. I’ve been on the other side of this too. If you don’t want anything like that to happen, then you say ‘No’. Which is always a thing to say. Sexiest word in Hollywood is ‘No’. Usually, though, they just come up with a bigger dump truck.”

Myths about Marxism 1: You don’t need to read Marx