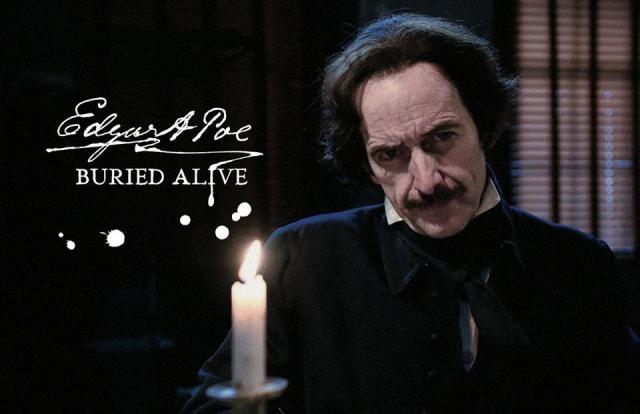 A near-capacity crowd filled the Peabody Library last Thursday night for a two-fold event honoring the life and legacy of Edgar Allan Poe. The first offering of the evening was a gallery reception where attendees could view the library’s latest exhibit: “The Enigmatic Edgar A. Poe in Baltimore & Beyond”. The exhibition of rare letters, books and manuscripts was compiled by New York collector Susan Jaffe Tane. The second offering was the premiere of an engrossing new docu-drama, titled Edgar Allan Poe: Buried Alive. A ninety-minute exploration of the life and times of Edgar Allan Poe, Buried Alive is scheduled to air next fall around Halloween on the award-winning PBS series American Masters.

Tane told the Baltimore Post-Examiner that there are approximately 500 pieces in her extensive collection. “The collection, of course, is all about Edgar Allan Poe – from his earliest work, Tamerlane – which was published in 1837 and is one of the rarest books in American literature – through his last letter to his mother-in-law, which was written a few weeks before he died.

“I have been amassing this collection for thirty years. The first item that I bought was a copy of The Raven, and I fell in love. I never imagined that a person like myself could own a first edition of The Raven. I assumed they were all in libraries and institutions around the world. After that initial purchase, I bought another book and then another. Then I bought Tamerlane and that really drove the collection. When you have the best book in the world, then the rest of the collection has to support it.”

Prior to his sudden death in 2011, Coberg was awarded a scripting grant of $60,000 for his Poe film project by the National Endowment for the Humanities. (The production grant of $500,000 took two more years to achieve.) Coberg also enlisted the help of Susan Jaffe Tane and film-maker Eric Stange of Spy Pond Productions.

“All of his life, Wally had a passion to make a film about Edgar Allan Poe,” explained Stange. “I inherited his vision when he died, and this is the culmination of about 7-8 years of research, fund-raising and development. We’re excited that the premiere is happening here in Baltimore. This is a great night for Wally Coberg.”

Edgar Allan Poe: Buried Alive features dramatic interludes and readings – with Tony Award-winning actor Denis O’Hare bringing the bedeviled author to life. The drama is punctuated by insights from assorted historians, scholars, museum curators and fiction writers. Even horror film-maker Roger Corman weighs in on the mind behind The Masque of the Red Death.

The final result is an enlightening and flawlessly-filmed portrait of the man who may be the most famous American author in the world, and yet even today remains something of an enigma.

Producer Stange was joined for the post-show Q&A by Susan Jaffe Tane and by Dr. Harry Lee Poe, the President of the Edgar Allan Poe Museum in Richmond, Virginia.

In talking about the decision to cast Tony Award-winning actor Denis O’Hare as Poe, Stange said, “The thing about Denis that I found most impressive is that he played a mute for an entire season on FX’s American Horror Story. I knew that if he could portray a range of emotions without ever uttering a word, he would be the perfect choice to play Poe. After he was cast, I was doubly pleased to learn that Denis had studied poetry in college and well-understood things like meter and the proper use of inflection. I’m very pleased with our choice.”

Dr. Poe noted the near-impossible task of making historical sense of Edgar Allan Poe in light of legends which have developed over the last century and a half .

“In the film, The Man Who Shot Liberty Valance, the newspaper editor remarks, ‘When myth becomes fact, print the myth’.

“In tackling this subject, we have over a 160 year tradition of how you think and react to Poe. What do you do? Make a film where the scholars sit around and talk and slowly put the audience to sleep, or go with the mythical figure the audience has come to love and expect?

“In this film, what we have is a dialogue – not only in the drama sequences – but also with the commentators; the scholars who are dealing with the real man, and writers who deal with the popular Poe. I think this is a remarkable film and a remarkable achievement; one which will generate interest and a desire to know which is the real Poe and which is the myth.”

Audience reaction to the film was mostly positive, with scholars and fans quibbling only over minor points of style and interpretation.

Jeff Jerome — Curator Emeratus of Baltimore’s Edgar Allan Poe House & Museum — remarked, “This is the best biograhy I’ve ever seen about Poe, and believe me: I have seen them all.” And Gabrielle Dean, the curator of the Peabody’s new Poe exhibit, exclaimed, “Seeing the film was really wonderful. It’s something we can show our students.” But Dean also noted what she thought were two curious omissions.

“One of the highs which seemed to be missing was the financial success of The Gold Bug. But also missing was one of the lows: Poe’s work on The Conchologist’s First Book. He obviously had mixed feelings about his role in recasting that work for money. Susan Tane’s amazing copy (currently on display at the Peabody Library) gives testimony to this, because Poe’s annotations clearly give evidence to his doubts.”

“Other films about Poe made much of his drinking. This is the first documentary I’ve seen on Poe which wasn’t preoccupied with his supposed alcoholism. The one issue I would raise is that Poe was known to have a slight Southern drawl – a distinctive Richmond accent. At least two scholars mention that, and I thought that Denis O’Hare has more of a Yankee accent. I was told that is something Denis struggled with. It’s a very small critique, really, compared to rest of the film itself. Otherwise, I thought his portrayal was spot-on.”

“I was particularly pleased with the fact that they brought up Poe’s involvement with literary criticism, because one could say he actually invented the genre. Poe said the critic should have the boldness to praise an enemy and the even more unusual courage to damn a friend. I especially liked that they allowed him to a take his stab at his nemesis, Rufus Griswald, at the end, when they mentioned his criticisms.”

A major supporter of the project, Tane demurred when asked if she would take part in another extensive Poe project.

“Probably not,” she said with a smile.

Tane then added, “In his last email to me, Wally wrote, ‘Well, Eddie, maybe now the world will finally understand who you were and the shadow floating on the floor will be lifted evermore.’

“The Enigmatic Edgar A. Poe in Baltimore & Beyond” is on exhibit now – February 5, 2017, at the George Peabody Library, 17 East Mount Vernon Place, Baltimore, Maryland. There is no cost to view the exhibit, however library hours are limited and the facility will be closed over the winter holidays. For times and dates, please visit the Peabody Library online.

Edgar Allan Poe: Buried Alive will air next fall around Halloween on the PBS series American Masters. Fans are encouraged to follow the film on Facebook.

Note: This story was updated to reflect the timing and the amounts of the two National Endowment for the Humanities grants.