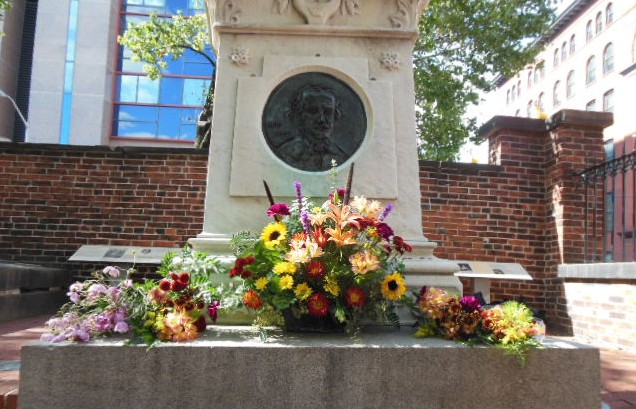 Whether or not one is an admirer of Edgar Allan Poe, most of us almost certainly have heard of him. What student has not read “The Tell-Tale Heart”? Here in Baltimore, there is no escape from the man. The city is dotted with sites associated with the great American poet and story writer: the food markets that nourished him and the brick towers that nourished his imagination; the train depots he used when he had money, and the streets he walked when he did not; the fine townhouses of his patrons and the spartan house where he not so much lived, but survived; the hospital building where he spent his last moments and his churchyard gravesite where many come to spend moments in reflection. And for those not given to visit the city’s historical sites, the professional football team in Baltimore has been named after one of his poems.

Although Poe is inextricably linked to Baltimore, it should be said that this is just one of several US cities that are identified with him. He was born in Boston, Massachusetts, and his first book of poems, Tamerlane and Other Poems, was published there. During his literary career, he lived in Philadelphia longer than in any other city, from 1838 to 1844. While there, he wrote many of his more well-known works, including “Murders in the Rue Morgue,” “The Pit and the Pendulum,” and “The Fall of the House of Usher.” His most celebrated poems—“The Raven,” “Annabel Lee,” and “The Bells”—were produced while he resided in New York City from 1844 to 1849. For a short period there, he realized his dream of becoming a magazine publisher. Richmond, Virginia, was the place of his youth. When Poe was only two, his mother died while working in that great city, leaving him and his siblings orphaned. Edgar was fostered by the family of a prosperous merchant there, John Allan, and received an exceptional education that included schooling in England and attendance at the newly created University of Virginia. Some who knew Poe said he had the accent and comportment of a Virginia gentleman.

Yet Baltimore’s affiliation with Edgar Allan Poe is arguably the strongest. His Irish ancestors settled in the port city during the 18th century and became prominent citizens. His grandfather was a hero of the American Revolution, and Poe’s father lived in the city for most of his life. When Poe fell out with his foster father, it was with his birth father’s family in Baltimore that he found a safe port in his stormy life. While living here from 1831 to 1835, he began writing short stories that were more marketable than his poetry. In 1833, he won recognition and a cash prize from the Baltimore Saturday Visiter for his tale “MS. (Manuscript) Found in a Bottle.” Poe had managed to get published before this time, mostly through his own devices, but it was while living in this city that he was first paid for one of his productions, marking the beginning of his professional literary career and Baltimore as the place of his discovery. After moving away from the city in 1835, he returned to visit many times and sustained relationships with the acquaintances he made here. Then, while passing through Baltimore in October 1849, he was stricken and died mysteriously, becoming a permanent resident. Each year, his Fayette Street burial site attracts thousands from around the world.

The Baltimore that Poe knew in the early part of the 19th century was the quintessential “boomtown.” The region north of the Patapsco River had been established in 1659 as Baltimore County, and, in 1729, a smaller area above the river’s north branch was designated by the state legislature for “erecting” a town. As recorded in an early directory, “By this act Baltimore was to be a privileged place of landing, loading and selling, and exchanging goods.” The following year, a surveyed plan was made, and the town began to grow at such a rate that, in a span of just 33 years, the nearby settlements of Jones Town and Fells Point had been absorbed.

In 1732, the city’s exports of tobacco, lumber, and skins were estimated at 24,000 tons. With the town’s dependence on trade with England, Baltimore had no shortage of loyalists during the American Revolution, but the majority of its citizens were devoted to the cause. In 1777, during one of the first recorded riots in the city, Edgar’s grandfather David Poe Sr. was listed among those accosting a Tory newspaper editor, and when Lafayette was passing through the town on his way to reinforce Gen. Nathanael Greene’s army in Virginia, David’s wife, Elizabeth, organized the effort to supply his troops with needed clothing.

By 1790, seven years before the city’s incorporation, the population was 13,500; within a decade, this number doubled to 26,500. The commercial advantages of navigable waters and ready access to the bay attracted many who wanted to establish a trade or set up shop. Baltimore’s export-driven economy, recovered from the Revolution, was ruined once more after the War of 1812, a conflict that spawned the privateers’ “nest” in Fell’s Point. Again, the city was divided, as demonstrated when rioters attacked an antiwar, federalist newspaper office, with deadly results. It was during this time that Baltimore earned the moniker “Mob Town” for its inhabitants’ proclivity to riot. Political gangs, fire companies, and, later, railroad workers seemed to be especially eager participants. One of the worst events occurred over a four-day period in August 1835 as a reaction to the failure of the Bank of Maryland. Some of the city’s finest mansions were destroyed, and as many as 22 people were killed.

With Baltimore’s growing wealth, mansions were being added faster than the people were burning them down. Much of what is seen today as the “old” Baltimore was created during the early part of the 19th century, including the following: the Mount Vernon district and Washington Monument, the Basilica, the 1814 Battle Monument, the Pantheon-like Davidge Hall of the University of Maryland, the Shot Tower, and the Peale Museum (today, the Peale Center). In 1822, the city’s street plan employed today was created and adopted.

This was the “Dodge City on the Chesapeake” in which Edgar Allan Poe found himself trying to start a career with his pen, a boisterous town bursting at the seams and an unlikely environment for contemplative undertakings. There can be little question that the sights and sounds of this throbbing city had an influence upon the tenor, if not the topics, of his works. Edgar Allan Poe’s Baltimore is an attempt to depict the city and the citizens that he knew. It was a place for Poe of many beginnings and, ultimately, one ending. It is hoped that those reading this small volume may find in it stimulation to visit these sites in the city of Baltimore and learn more about one of America’s greatest writers.

When Edgar Allan Poe returned to Baltimore in 1831, he had no credentials, trade skills, or prospects for employment. It appears he immediately took up residence with the Clemm-Poe household on Wilks Street, which consisted of Elizabeth Poe, his bedridden grandmother; Maria Clemm and her two children, Virginia and Henry; and Edgar’s older brother, William Henry Leonard Poe. A female slave is also listed as a household member in the census. Including Edgar, seven people lived in what would be described today as a top-floor apartment of probably no more than 750 square feet. William “Henry” Poe died in August 1831; in November, Edgar may have been jailed for nonpayment of a note he cosigned on Henry’s behalf. The recurring outbreak of cholera and proximity to what was an open sewer may have prompted the family’s relocation around 1833 to a newly built house at 3 Amity Street in the western precincts of the city of Baltimore. There, Poe continued to write and submit his work to various magazines while tutoring his 10-year-old cousin Virginia. In October of that year, Poe won a cash prize for a tale submitted to the Baltimore Saturday Visiter, marking the first time he was paid for any of his compositions. As a direct result, he befriended John Pendleton Kennedy, one of the contest judges, who acted as mentor and patron for the unknown writer, arranging his first full-time literary employment with the Southern Literary Messenger in Richmond, Virginia. After Poe’s grandmother died that summer, he left for Richmond during a four-day riot that was the worst in Baltimore’s history.

In partnership with Poe Baltimore, the caretakers of the Edgar Allan Poe House, lifelong Poe student and Baltimore native David F. Gaylin has assembled a collection of archival, rarely seen images to re-create a picture of the antebellum town that Poe walked through every day.