Following the reaction to last weeks’  column, I thought I’d put forth some ideas on how to replace the Second Amendment. So, President Obama and Congress take note.

“The carrying of firearms is a barbarous custom, and it’s time the practice was broken up,” so opined The Dodge City Times in 1882. A photograph from 1878 shows a large sign on Front Street in Dodge City proclaiming, “The Carrying of Firearms Strictly Forbidden.”

And down in Tombstone, Arizona, Ordinance No. 9 took effect in 1881, “To Provide against Carrying of Deadly Weapons”. It read in part, “It is hereby declared to be unlawful for any person to carry deadly weapons, concealed or otherwise [except the same be carried openly in sight, and in the hand] within the limits of the City of Tombstone.”

So much for wildness of the Wild West. While shoot-outs was great film entertainment, there is a crucial distinction between entertainment and reality. Actors such as John Wayne are icons of manliness, because they acted.

Those who lived through hardscrabble times appreciated the difference, and William Manchester underscored the difference in his magnificent essay, The Bloodiest Battle of All. He relayed how during a screening of the ”Sands of Iwo Jima”, staring John Wayne as Sergeant Stryker, Manchester and another ex-Marine were asked to leave the theater because they couldn’t stop laughing.

He adds, “Each evening, Navy corpsmen would carry litters down to the hospital theater so the men could watch a movie. One night they had a surprise for us. Before the film the curtains parted and out stepped John Wayne, wearing a cowboy outfit – 10-gallon hat, bandanna, checkered shirt, two pistols, chaps, boots and spurs. He grinned his aw-shucks grin, passed a hand over his face and said, ‘Hi ya, guys!’ He was greeted by a stony silence. Then somebody booed. Suddenly everyone was booing.

“This man was a symbol of the fake machismo we had come to hate, and we weren’t going to listen to him. He tried and tried to make himself heard, but we drowned him out, and eventually he quit and left. If you liked ‘Sands of Iwo Jima,’ I suggest you be careful. Don’t tell it to the Marines.”

Cinematic fairy tale notions of protection dominate the gun debate. NRA executive vice president, Wayne LaPierre, proclaimed last year, “The only thing that stops a bad guy with a gun, is a good guy with a gun.” The idea of protection with a gun is delusional, and sadly illustrated by the brutal murder that same year of Kaufman, TX, District Attorney Mike McLelland and his wife Cynthia in their home. They never had a chance, watching television. McLelland had taken to carrying a .38 snub-nose for protection after the brutal slaying of one of his assistants, Mark Hasse, two months earlier.

Despite its claims of populism, the NRA is primarily a lobbying arm of the multi-billion dollar gun industry. That said, full-time armed guards there are necessary.  This not about individuals reaching for guns a.k.a. OK Corral, but hired professionals trained to guard against menace or threat.

When Ronald Reagan was nearly assassinated at the Washington Hilton in 1981, extraordinarily brave Secret Service agents put his life over theirs and blocked incoming fire with their own bodies. One took a bullet to the stomach. The notion that President Reagan would have had an opportunity to reach for a gun after pistol fire commenced is pathetic.

And the notion that somehow guns protect us from tyranny is preposterous. There is nothing democratic about assassinating an elected official. One lone gunman overriding the will of the majority at the ballot box is the ultimate act of despotism.

The most overused and silly meme in history is comparing any politician or political program one doesn’t like to Hitler or the Nazis. Following in that rickety tradition is attributing gun control quotes to Hitler. All claims have been debunked. Clayton Cramer, a pro-2nd Amendment supporter, has done credible research into this fiction. He points out most of the gun control laws during Nazi Germany were already in place during the Weimer Republic. Whereas the Nazis passed further weapons bans in 1938, toward Jews and other “non-citizens,” guns were a point of control, not the defining factor. The Nazis controlled everything.

All recent successful revolutions have been non-violent or achieved with strategic use of international force. The Bosnian War (1992–1995) was halted by a NATO bombing campaign against the Army of the Serbian Republic. Guns in Bosnian homes didn’t prevent Serbian atrocities. In South Africa, Apartheid was stopped with the non-violent protestations of the African National Congress (ANC) and Nelson Mandela. When the ANC initiated protests decades earlier with terrorist attacks, the tactic backfired on many levels. All of the successes in the Arab Spring were non-violent. 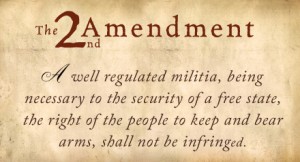 By contrast, Syria has degraded to disaster and ruin, not because the opposition was not armed or citizens didn’t have guns, but because Syria has become a staging ground for many simultaneous conflicts. Russian and Iran value an Arab ally in Bashar al Assad and are pumping billions of dollars in armaments into the region. Islamic militants are flooding Syria to promote their own agenda.

The remaining rebels and international community are hampered to defeat the dictatorship of Bashar al Assad or find a peaceful settlement in the din of this confusion.

Most importantly, the gun has become an anachronism of political expression. As Manchester noted, “As late as the spring of 1945, it was possible for one man, with a rifle, to make a difference, however infinitesimal, in the struggle to defeat an enemy who had attacked us and threatened our West Coast. The bomb dropped on Hiroshima made that man ludicrous, even pitiful. Soldiering has been relegated to Sartre’s theater of the absurd. The image of the man as protector and defender of the home has been destroyed.”

Contemporary interpretations of the 2nd Amendment lean toward individual liberties, belying the actual reason for its creation, to protect slave militias, to rein in slaves and secure the state. The opening clause of the 2nd Amendment, “A well regulated militia being necessary to the security of a free state,” states the purpose precisely. But in reality, a missile exiting a tube killing or injuring a target does not promote democracy. Words and ideas are more powerful than guns.

As I considered improvements to the 2nd Amendment, I pondered what is the prime benefit of the Amendment? The main value is the spirit of freedom and liberty it embraces. Unlike the 21st Amendment which repealed the 18th Amendment outright, the 2nd Amendment should be changed. Other Amendments in the Bill of Rights specify individual rights, such as freedom of speech, protection against unreasonable search and seizure, the right not to self-incriminate, and no torture, the 9th Amendment expands individual rights not enumerated in the Constitution (abortion and Roe vs. Wade is the most notable example). But privacy isn’t specified.

Yes the 4th Amendment protects against unreasonable search and seizure, but the specific right to privacy isn’t listed. We have begun to take for granted our digital footprint is common property, but why, because we carry smartphones on us? Should the government know our day to day actions and movements? This level of surveillance seems innately perilous to individual freedom.

If an individual chooses to share every thought and movement publically on Facebook, that is a choice, but if a person just lives in today’s world and sends a text or makes a cell phone call, should the government necessarily know? Just because the NSA can crack every encryption doesn’t mean it should.

Perhaps the replacement amendment should read, “Privacy, a keystone of freedom and liberty, shall not be abridged or compromised by the state.”

249 thoughts on “Dump the Second Amendment for the Privacy Amendment”