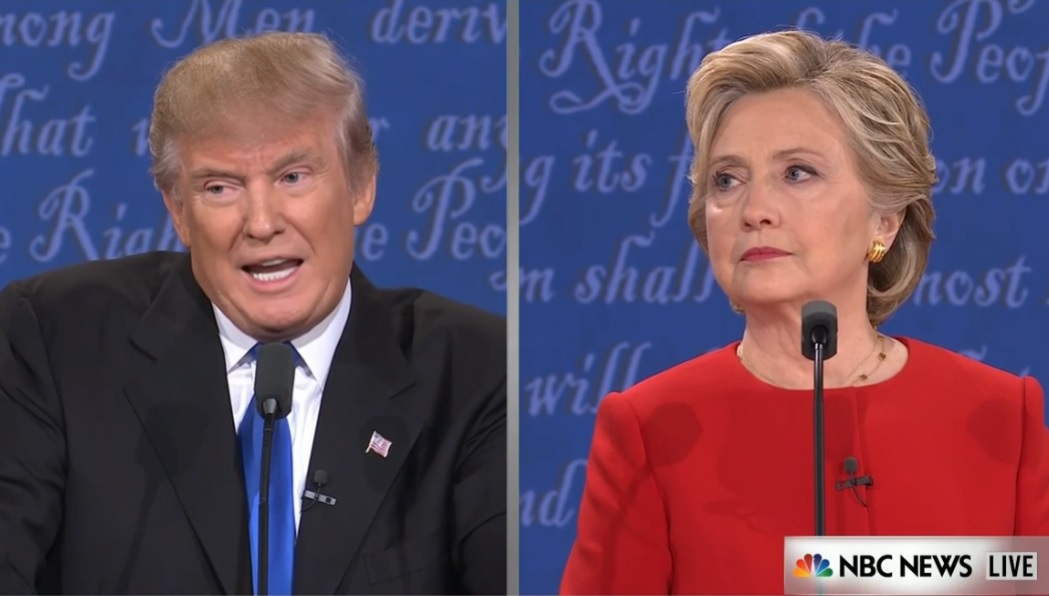 Who won the debate? What right does the media have to decide an encounter where the scoring is vague and the goal posts are movable?

The more important question is: Whose minds were changed by the debate? Very few, probably. Donald Trump and Hillary Clinton were much as we’ve come to know them over more than a year of campaigning, and years in the public eye.

Trump the interrupter, the verbal bully, the relentless messenger on bad trade deals, lousy treaties, the lack of law and order, poor immigration enforcement, unrelenting attacks on opponents. But he is easily distracted by attacks on his own record.

If you already liked Donald Trump or sort of liked him, or disliked him but liked his message and thought he was the president we needed, nothing in 98 minutes would dissuade you.

Ditto for Hillary: like or dislike her, she is the cool, calm, restrained, fact-filled career politician who always comes prepared. If you want knowledge and political experience, she’s the ticket. Maybe she could have said a few words when she was vilified, rather than just smiling and shaking her head.

As he was in every primary debate, Trump is never prepared to offer specifics. He’s the big picture guy. He will make America great again. Believe him.

Both candidates find it difficult to admit past error. Trump absolutely refuses to acknowledge that he did briefly sort of support the Iraq war before he opposed it; that he did keep the birther issue alive for years after it had been disproved. Maybe Hillary’s folks had a role in lighting that spark of doubts — which she won’t admit — but Trump kept the fires smoldering. So what?

Except that Trump can never, ever admit he was wrong about anything.

There’s the baloney about why he won’t release his tax returns. Clinton says he must have something to hide. Of course he does. She offered four good possibilities.

Will you support the results of the election? He hems and haws.

What choice do we voters have about the results of the election?

What other country would we rather live in?

Maybe one with neither of these people at the helm.

Hillary by a nose — too many missed opportunities by Trump

All the predictions were that the first Hillary Clinton-Donald Trump presidential debate of 2016 would be unpredictable in effect on the election, if not in quality. There was a pretty strong consensus that Hillary would be wonkish and that Trump would be a debater without great knowledge but with ad hominem attacks aplenty.

They both perpetrated such attacks more and more as the debate progressed, and it ended with Hillary attacking Trump’s unseemly attacks on women.

Those who think the economy is the most important issue favor Hillary overwhelmingly, and those who thinks terrorism is most important favor Trump by a large margin. That’s interesting, since Hillary was Secretary of State and Donald Trump has become rich through entrepreneurship.

For the first time in presidential debate history, a majority of voters says that both nominees are dishonest.

Leading up to this nervously anticipated debate, Hillary opined that half of Trump’s supporters could be put in a “basket of deplorables,” which she later said she may have overestimated. Trump said that Hillary is not physically or mentally up to running the country.

Both comments are beyond the fringe of acceptable political rhetoric and past presidential nominees.

Starting on a quieting note

The debate started out on an quieter note than expected, as the viewer was informed that there were to be no outbursts from the audience for either candidate, plus the promise that the candidates would have time to debate each other. Those two promises were mostly fulfilled.

The first questions related to jobs: why are you the better candidate on this? Hilary said we need to focus on new jobs, infrastructure, and small business. We must raise the minimum wage.

Trump never picked up on this. Debt-free college? Why would Trump not focus on this giveaway that will make the deficit soar?

Too often Hillary controlled the topics of the debate, often just by Trump’s not grabbing the reins. Even when she attacked his not releasing his taxes, he seemed to accept it as a legitimate issue.

Hillary says Trump’s not releasing his tax returns means he is hiding something. Trump asks about Hillary’s e-mail and brings up the fact that the man who set up her server took the Fifth. Then the issue is dropped, as Hillary does not seriously engage it.

Hillary brings up the allegation that Trump has “stiffed” people who have done work for her. Trump weakly answers that his obligation is to himself, his employees and his family, not denying her premise.

Hillary then describes Trump as having rooted for the housing collapse so he could gain and alleges that Donald thinks climate change is a hoax perpetrated by the Chinese, which he non-verbally denies, shaking his head.

Donald retorts that the U.S. invested in solar panels and it was a disaster, and castigates NAFTA and Hillary’s inconsistency on that and TPP (Trans-Pacific Partnership agreement) and tax raises and regulations.

Hillary does not respond

Hillary meekly says she would limit regulations, never answering where she has been on these issues.

On race relations, Hillary focused on racial bias, parenthetically pointing out that we had to do something about the “gun epidemic,” while Trump praised the police, but there was little clash, even on his “stop and frisk” support.

Trump was admonished by moderator Lester Holt, who said “stop and frisk” had been found unconstitutional. Holt was not awful, but he was not disinterested. His chastising of Trump for not answering directly or responsively was consistent.

The topics were more than a little Hillary-friendly…little on the e-mails, nothing on the Clinton Foundation and nothing much on Benghazi. At least Trump talked some about the intentionality of the e-mail scandal, saying it was “not a mistake,” as Hillary alleged.

On the birther issue, Hillary pilloried Trump correctly, but he never referenced her attacks on President Obama and disingenuous statement regarding his birth in “I take him at his word.”

Trump, like Richard Nixon did 56 years ago, repeatedly said on matters that “I agree with Secretary Clinton.”

There were many paroxysms of Trump criticisms, but too few in the first two thirds of the debate, and too few on Clinton-vulnerable issues. He ended strongly on criticizing Hillary on her ISIS policy, but overall it was just insufficient. That, too, deserved more time from Trump and even Holt.

At the end Trump did not defend his attributed “cavalier” attitude about nuclear weapons — why?

It is hard to find many observers who will note that there are two more presidential debates and that in 2012 Mitt Romney, after demolishing Barack Obama in the first debate of that year, played defense on foreign policy in the subsequent debate and lost his momentum. In 1984, after losing the first presidential debate, Ronald Reagan came back and thoroughly defeated Walter Mondale in both the debate and the election.

Trump will have an opportunity to come back, and the polls in this election do not necessarily mirror qualitative differences in debates.

Professor Vatz is author of “The Only Authentic Book of Persuasion: the Agenda-Spin Model.” He can be reached at rvatz@towson.edu.

The Agile CEO: 7 New Laws of Business for the modern world