I have nothing against Brian Williams. I haven’t really had an opinion on him one way or another (although I have wondered about his feelings regarding his talented daughter Allison being on the “almost-porn” show Girls), and I have always thought him articulate and “well-packaged.” He reminds me of an aging, trench-coated Ken doll. In fact, my family in Maryland almost considers him family, and will often say on the telephone, “We’re going to watch Brian at 7.” Just “Brian”, not “Brian Williams”, or “the news.” He adds a comfortable, reliable atmosphere to their evening ritual.

Aside from being a good anchorman, Williams has always been jovial and self-deprecating — in that “of course we all know I’m wonderful” way that today’s celebrities have — and has seemed keenly interested in good reporting about the subjects Americans care about. He has an “aw shucks” air of sincerity mingled with a Manhattan cocktail party “I understand how the wheel really turns” intelligence that Americans have trusted for years.

Now a kerfluffle over accuracy in reporting has simmered to a boil, and Williams’ reputation is taking a nosedive, similar to the one a certain Chinook helicopter took during the Iraq War. A Chinook (or “bird” as he is fond of calling it) Williams has for years claimed to have been aboard when it came under enemy fire during a transport mission. Ah, Brian — isn’t being a national anchor, celebrity, and a David Letterman favorite enough? You need to have been shot down in war, too — even when it isn’t true?

All of this self-imposed nonsense came to light when Williams aired a segment on his Friday news broadcast “NBC Nightly News with Brian Williams” about an evening he recently spent at a New York Rangers hockey game with Army Sgt. Major Tim Terpak, who was honored at the game. Terpak, now-retired, was part of a rescue unit that came to the aid of several Chinooks on March 3, 2003, during an Iraq war mission in which Williams and his camera crew was embedded. The problem is, Williams wasn’t on the Chinook helicopter that was shot down, but was instead aboard a Chinook that arrived over half an hour after the shooting on the downed Chinook had ceased. When the ”Nightly News” segment was posted to Facebook, Lance Reynolds, the flight engineer who had served on the attacked Chinook that Williams has for years claimed to be aboard, called him out on his version of the story.

“Sorry dude,” he wrote, “I don’t remember you being on my aircraft.” Sgt. First Class Joseph Miller responded to the post (he was the flight engineer on the later aircraft that Williams was actually on), posting, “I’ve been calling him (Williams) out on this for a long time with no response. He was actually on my aircraft and we came in behind you about 30-45 minutes later. He is a total POS! He had the audacity to tell me the whole thing was like Saving Private Ryan and that the whole army would be out looking for him. I called him an idiot in front of his camera crew and he didn’t come back to my bird for next 3 days!”

Being a celebrity has many pressures, I’m sure — staying on top of the ratings war, coming up with late show banter, nailing down a place in the Hamptons in which to “summer.” And as often as famous people have “mis-remembered” events, I am assuming that it becomes a vicious cycle where you begin to believe your own fabrications; your own fabulosity. I would probably be correct except for two things: conscience, and common sense.

When you hear yourself telling a story that you know you have made up, no matter how much you wish you were aboard that Chinook, you know you are lying. It must be a special kind of hell to let yourself get away with that, year after year. At night in the mirror, after all, that reflection is still just a human being, like all the rest of us normal, untelevised schlubs.

As for you, Mr. Williams, I hope this uproar has served as a reminder that we are all accountable when it comes to the truth. The excuse of “the fog of memory after twelve years” just doesn’t cut it — you’ve been laying down the bull for over a decade on this one. Try to remember that the military deserves the credit in war, not a celebrity news guy. My family might still watch you, but I think from now on you will be known simply as “Brian Williams.”

Trump’s State of the Union Address, FEMA, Puerto Rico, What it Means to Be an American Citizen 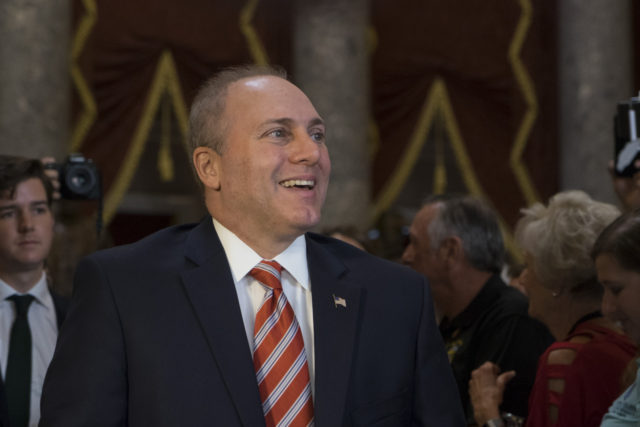 Scalise calls it a ‘miracle’ he survived