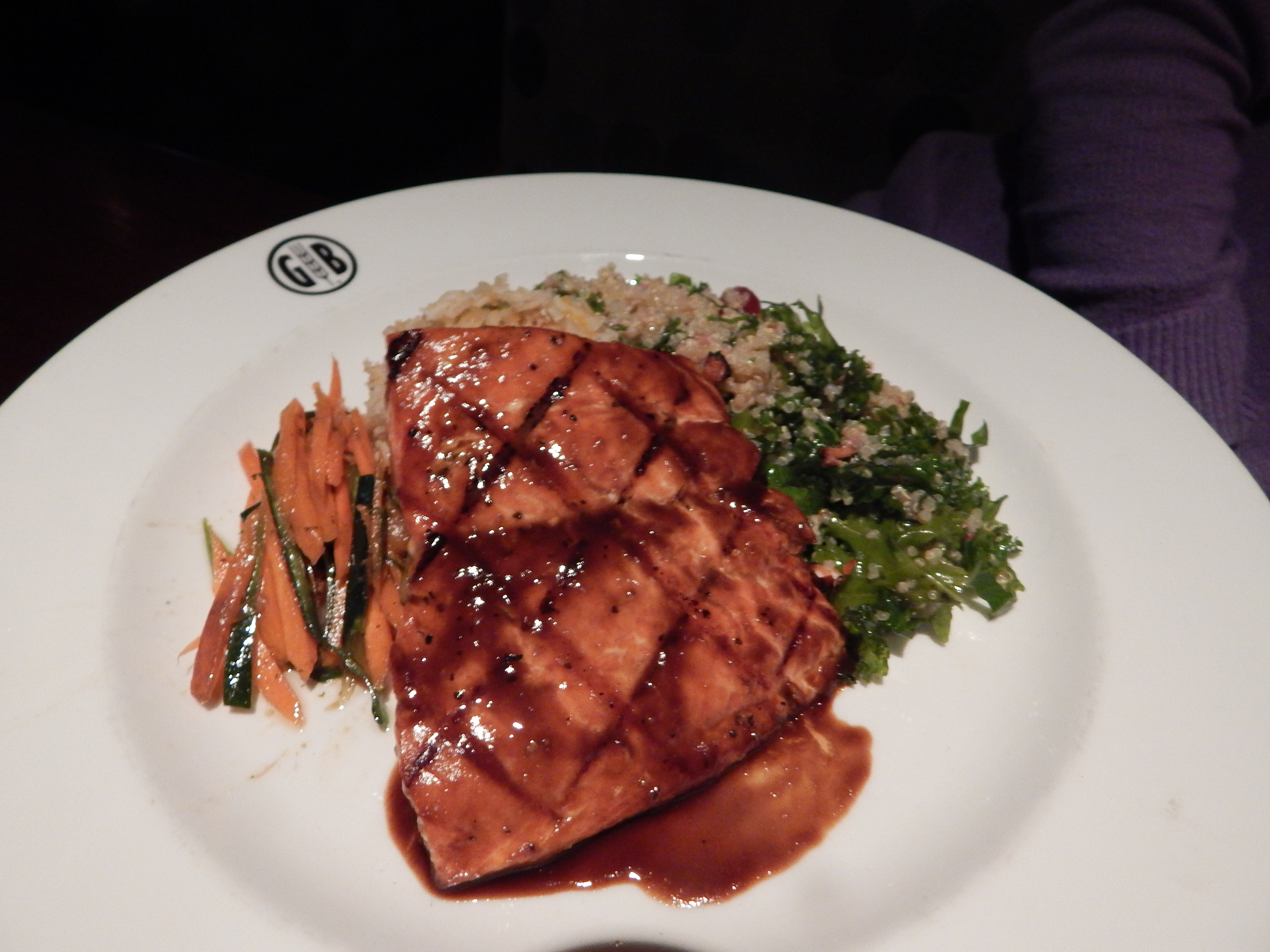 The wild Alaskan salmon, with a succulent bourbon glaze, was so flaky it could have been eaten with a spoon. (Jon Gallo)

“Beer is the building block,” he said.

But it’s what he does with fresh seafood, poultry, vegetables and pasta that make Gordon Biersch so much more than just a waterfront eatery with exquisite house-brewed beers.

Gordon Biersch offers a German-style beer to satisfy even the snobbish drinker. Whether deciding among  a light and refreshing Golden Export; a fruity Hefeweizen with hints of banana and clove; a malty Auburn-colored Marzen; or a dark Schwarzbier with a coffee flavor, picking what to drink at Gordon Biersch is just as fun as choosing what to eat.

But the restaurant isn’t intimidating for customers who don’t know the difference between a Bud Light and an award-winning smoked Rauchbier, which is Gordon Biersch’s star beer at the moment.

“We take a lot of pride in having our beers brewed here,” General Manager Justin Shunkwiler said. “But we want to maintain our neighborhood feel.”

Gordon Biersch, which opened in October 2012, has found a home by cranking out delicious food that can hang with any establishment in a neighborhood filled with places to eat and drink.

The Alaskan Salmon Cake Sliders ($4.95 for one, $14.95 for three): This could easily be a meal. The wild sockeye salmon cakes have a hint of lemon and dill and are served with homemade tartar sauce, arugula, green onions and roma tomatoes. It’s hard to eat just one. The only thing wrong with the dish is the price. Generally, the more a customer buys of something, the less it should cost – not the other way around.

Crispy Crab Risotto Fritters ($12.25): They could call these fried balls of awesomeness. Crab: check. Crispy on the outside and creamy on the inside: check. Pancetta and havarti cheese to complement, but not overpower, the fritter: check. A lemon remoulade to give the dish a perfect goodnight kiss: check. That’s checkmate in my book. Order them – you’ll thank me in the morning.

Seafood Carbonara ($16.50): It was exactly how it should be, but nothing you couldn’t get a few blocks away in Little Italy. Shrimp, swordfish and tuna were sautéed with pancetta in a creamy parmesan sauce with tomatoes and peas over linguini, and of course, it was topped fried egg. It was good, but not great.

Smoked Chicken & Mushroom Pasta ($14.25): The chicken, tomatoes, mushrooms and bowtie pasta were cooked perfectly, but what makes this dish worth ordering is the beer-infused gorgonzola cream sauce that brings the dish together without overpowering it. The ingredients work in unison to elevate the dish instead of making it seem like a bunch of ingredients were thrown into a bowl with a few ladles of sauce.

Cioppino ($17.50): Dear Gordon Biersch: Please don’t take this off the menu when the temperature rises. It’s just too good. At first glance, $17.50 looks like a lot to pay for a bowl of soup, even if it’s a big bowl. But since the bowl is filled with shrimp, blue mussels, swordfish, tuna and chopped clams and light on carrots, onions, fennel, potatoes and sweet peppers, the price is justified. The broth, made with tomatoes, wine and clam juice, gives you a swimming pool of flavor. Don’t worry if there’s broth left over – that’s why it comes with grilled crostini.

Wild Alaskan Salmon ($19.95): You could easily spend twice as much for something half as good. If there’s a competition for best fish dish among Inner Harbor restaurants, this could win. The salmon, with a succulent bourbon glaze, was so flaky it could have been eaten with a spoon. But the dish scores points because Gordon Biersch doesn’t throw some broccoli florets and mashed potatoes on the plate and call it a day. The salmon comes with a quinoa and kale salad and a brown rice pilaf, so taste isn’t sacrificed for nutrition.

There’s a good chance you won’t have room if you order a starter and a main course since Gordon Biersch is extremely generous with its portions.

Warm Apple Bread Pudding ($6.75): Thank goodness for the whiskey sauce because without it, this dish would have been a lump of mediocrity. But the sauce’s depth and sweetness is so good it could have been served in a shot glass.

Chocolate Budino Cake ($7.65): Take a moist Italian chocolate pudding cake, top it with warm fudge and place it next to a scoop of homemade vanilla ice cream and a shortbread cookie and add some fresh strawberries and blueberries and you get a dessert that’s made for sharing or gorging, depending on your point of view.

The staff is prompt and polite. Our waitress, Jessica, was very knowledgeable not only about the beer selection, but which dishes they would go with best. The staff filled drinks and tended to the table regularly without being overbearing.

Whether it’s for lunch, Happy Hour or dinner, Gordon Biersch, which also has locations in Annapolis, Rockville and Washington, D.C.,  has something for everyone, including those who don’t care to drink. The restaurant features everything from burgers to grilled cheese to steak to pizza to a $4.95 kid’s menu, making it appropriate for family meals or for evenings with that special someone.

Ball: Howard County will lift some restrictions on retail establishments and religious services

O’Malley’s Irish ghost writer, and a wee tale of speechifying