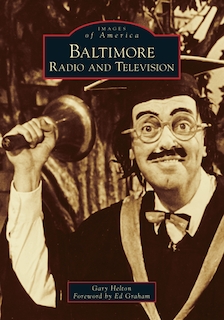 I just ran across a delightful book titled, “Baltimore: Radio and Television.” It’s written by Gary Helton and published by Arcadia. It’s only 126 pages long, but it brought back a lot of pleasant memories for me.

On its cover is a photo of the late Stu Kerr in one of his fave roles – “Professor Kool.” He has a school bell in his right hand. Each week on his WMAR-TV show for the kids, he would play the school song to the tune of “Jingle Bells.” Kerr passed away in 1994.

Radio personality, Johnny Walker, is also spotlighted. He starred on WFBR from 1974 to 1987. His fans saw him as a “creative genius.” I can say honestly that I never listened to him, but he did have his true believers. Walker died in 2004, at the age of 55.

I’m pleased to say that one of my icons, Stan Stovall, is chronicled in the book. Today, he’s a regular on the WBAL channel 11 news broadcasts. The book underscores how at “age 18 in 1971, Stovall was the youngest television news anchor in America working for a station in Phoenix.” Way to go, Stan!

One of the most well-known women to appear over the years on Baltimore TV is Rhea Feikin. In her heyday, she was recognized as the “First Lady of Maryland Public TV.” And, here is something I didn’t know about the popular Feikin: she was one of the “cofounders of Center Stage.” Well, bless her heart for that fact. Plus, the multi-talented Feikin has appeared in two of John Waters’ classic films – “Hairspray” and “Cecil B. DeMented.” (Yours truly was in four of Waters’ flicks with “Pecker” being my favorite.)

Naturally, you can’t recall the icons of yesteryear without mentioning – the one, the only, Oprah Winfrey, and her stopover at WJZ. Before moving to Chicago in 1975, Oprah had learned the fundamentals of her trade in Baltimore. When she left in 1975, there was a huge sendoff for her at Rash Field in the Inner Harbor. How do I know that? Because I was living in Federal Hill at the time and walked over to enjoy the festivities, that’s how.

And, who can ever forget Bailey Goss? He hosted WMAR’s “National Sports Parade” for years. Goss was probably better known as the “pitchman” for National Boh Beer. (Hey back in the 50s, like many of my fellow Locust Pointers, I was a big National Boh kind of guy.)

All of the above brings me to my favorite on-the-air personality – Chuck Thompson! I remember when he was doing the Baltimore Oriole games when the team was in the International League. I recall getting him a pack of cigarettes – “Chesterfield.” The stadium was on 33rd Street back then. Thompson gave me a quarter tip. Cool!

Thompson’s career was made when he did both the championship Orioles and the Colts in the 50s and 60s. The celebrated “1958” Colts with John Unitas at the helm, was a high point for Thompson, the Colts, and for me, too. (Hell, I was at “The Greatest Game” in Yankee Stadium on December 28, 1958, Colts vs. Giants. It ended in overtime with a 23-17 victory for the emerging NFL champions – the Baltimore Colts). Thompson died in 2005.

My fave weatherman Tom Tasselmyer gets a nod, too. He joined WBAL-TV, channel 11, in 1989. He’s been going strong ever since. Tom was born in Baltimore and now lives in Baltimore County.

Legendary political reporter Eddie Fenton is also featured in the book. He spent 47 years at WCBM. He covered Annapolis and he never “owned a car.” One year when the General Assembly was in session, I recall driving him backed to Baltimore. En route, he got on his mic and without any notes in front of him, gave his nightly report to the station without missing a beat. He died at the age of 70, in 1988.

In Fenton’s category as a legend was the lovable character – Charley Eckman. He was one of the most popular of sportscasters for both WFBR and WCBM in the 60s until his death in 1995. Eckman had also been a professional basketball referee and a head coach. He died at age 73.

Introducing Jack Bowden, a Baltimore guy, who made his career in TV with WMAR. He covered mostly politics but also served as an “anchorman.”  Bowden once did a story, in the late 70s, concerning City Hall, when William Donald Schaefer was mayor. I was in charge of the City’s Litigation Division at the time and Bowden interviewed me in my office. I can’t remember the details other than that Bowden came off as a gentleman and a real professional. He died in 2016, at age 82.

I have touched on just some of the highlights in Helton’s book. He is a fine writer and his book covers both the TV and the radio scene of that bygone era with rich details and also in a highly entertaining fashion.

I’m giving Helton’s efforts five out of five stars along with the highest recommendation.

The Pickleback – a hip drink

Romney won the debate: So he lied and cheated, get over it