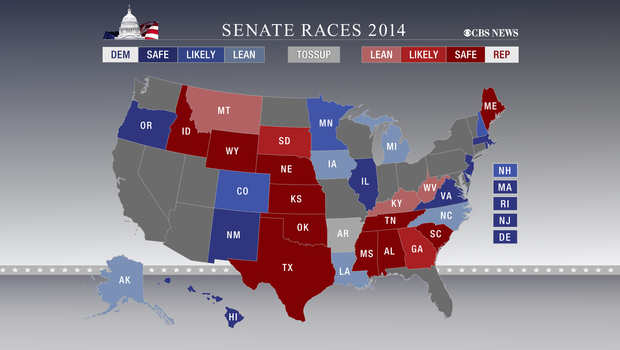 It’s become fashionable to write off Democrats’ chances of holding the Senate this fall. Political models belonging to gurus like 538.com’s Nate Silver and analysts for The New York Times show the GOP as having better than even, sometimes much better than even, odds of capturing the upper chamber in November.

The roadblocks to a GOP majority  crop up on a monthly basis (Kansas, South Dakota, Georgia),  but the conventional wisdom has stayed the same for much of 2014: Republicans will pick up the six seats they need for control, if only because low-turnout midterm elections and the fact that seven Democrat-held seats are in Romney states give them a great chance to win based on the political laws of physics.

It’s true that the Senate math is daunting for Democrats. It’s been noted before that with Senate elections taking place in Arkansas, Alaska, Montana, West Virginia, South Dakota, Louisiana, and North Carolina, all that Republicans need to do is convince several million rural voters who disapprove of President Obama’s performance that the Senate should be handed over to the Republican party. That’s not a tall order at all – and yet, control of the Senate is up in the air less that three weeks from Election Day.

Things weren’t supposed to be this way. Just last summer, GOP strategists were looking at a very simple and straightforward path to victory. First, put three Democrat-held seats in the bank: West Virginia, Montana, and South Dakota. Then, topple just three more Democrats out of four potential targets in Arkansas, Louisiana, North Carolina, and Alaska. The GOP had just two theoretical headaches in Kentucky, where Senator Mitch McConnell’s unpopularity almost but not quite canceled out the state’s Republican tilt, and Georgia, a state with a rapidly diversifying electorate that made it trending, but only trending, purple.

Three months later, the Senate map is much more complicated – and while Democrats will lose some seats, their path to the majority looks clearer. That’s mainly thanks to three developments in three states that were supposed to be GOP locks:

Georgia: There are some 600,000 eligible minority voters in the state who hadn’t registered to vote – and Democratic groups have made it their mission to register these likely supporters and make them a part of the electorate in November.

It’s already born some fruit, with more than 100,000 new voters registered this cycle and 40,000 more applications being processed before Georgia’s deadline. These are great numbers for Democrat Michelle Nunn, who is already bolstered by her golden last name in the state and a hobbled GOP opponent who recently declared he was “proud” for his work in outsourcing jobs as a CEO.

South Dakota: This was supposed to be a pick-up opportunity that GOP governor Mike Rounds could sleep through and still win – but while he might have been asleep these last few months, polls showing a low-single digit race have recently scared him straight. Rounds is in a complicated three-way race between Rick Weiland, a former Democratic staffer who’s running a spirited and enthusiastic progressive campaign, and former senator Larry Pressler, who is a Republican-turned-Independent.

Pro-Weiland forces have committed more than $1 million to the airwaves this month, and that’s real money in a rural state with cheap media markets. Meanwhile, Weiland’s efforts to mobilize the Native American community this November have already won him the backing of tribes that make up nine percent of the state’s population – support that might be underestimated in this close contest. 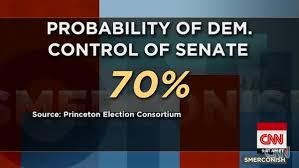 Kansas: At this point, all of the “What’s the Matter With Kansas?” headlines about this year’s Senate race should be banned from journalism, and not just because they’re overused. Everyone knows what’s the matter with Kansas – four years as a laboratory for right-wing economics have left behind a sluggish economy that lags those of its Midwestern neighbors. The backlash has created an electorate that might finally be ready to punish politicians with Rs next to their name, both at the federal and state level.

Independent Greg Orman is leading GOP Senator Pat Roberts by a small margin, and while Roberts may yet pull this out, he seems like the underdog. Orman hasn’t said yet how he’ll caucus if he’s sent to Washington – but after the millions of dollars in attack ads directed at him by the GOP, is he going to be in any mood to carry water for Mitch McConnell if he overcomes the onslaught?

Georgia and Kansas would be pickups for the Democrats, while South Dakota would be a key hold for them. A victory in just one of these three states would be a serious roadblock to a GOP majority – and while the case for Republicans hanging on can be made in each of these three states, it’s more likely that at least one of these races (probably Kansas) will slip through their fingers. It’s already easy to envision Mitch McConnell hurling a tumbler of bourbon at the TV screen as Greg Orman is pronounced the winner in Kansas at 9:15 Central Standard Time.

But McConnell might have a far more personal reason to be distraught that night. Polls show that the Republican minority leader, who announced that his top political priority was to make President Obama a one-term president, may himself be involuntarily retired from politics this fall. His approval numbers are terrible, routinely checking in at the low thirties among Kentucky respondents, and he faces a popular statewide official in Secretary of State Allison Lundergan Grimes. An October 6 Bluegrass poll showed her leading by the thinnest of margins, 46-44, and while McConnell’s probably the favorite, an upset can’t be ruled out.

Democrats have their own headaches. In Iowa, Republican Joni Ernst is mounting a strong bid to replace progressive Senator Tom Harkin. She’s led a spate of polling in the last month, it’s been close, and a new Public Policy Poll shows her opponent Bruce Braley now leading her by one point, 48-47. Close and within the margin of error, but an improvement by three points from an earlier poll that shows momentum might be with Braley. The Democratic congressman has benefited from a flurry of newspaper endorsements, and a visit from Michelle Obama that should go a long way towards energizing the constituencies he’ll need.

In Colorado, Representative Cory Gardner wants to represent all 5,268,378 citizens of the state – as well as the fertilized eggs that would be deemed as people through the personhood legislation he now denies co-sponsoring in the House of Representatives. He seems to be a gifted politician who’s affable and inoffensive on the trail, and some of Udall’s attacks on him as an extremist social warrior seem to be falling flat as a result. Gardner has an edge in the polls – but Colorado polls have massively understated Democrats’ performance on Election Day since at least 2010, thanks to hard-to-poll Hispanic communities that usually break heavily their way. Another complication for Gardner is the fact that Colorado has mail voting this year for the first time, which should expand the electorate in a way that helps Udall.

Still, Senator Udall might fall this year. Bruce Braley might lose. Democratic senators like Mark Pryor of Arkansas, Mark Begich of Alaska, and Mary Landrieu of Louisiana might be swept away as the GOP successfully defends all their vulnerabilities. That’s possible, and it would be enough to establish a GOP Senate with a 53-47 majority.

But after comparing this situation to the closing weeks of 2010, remembering the important Democratic survival stories, and thinking of what’s different today, my gut tells me it won’t happen. The Bannock Street Project – a $60 million voter mobilization project funded by the Democratic Senatorial Campaign Committee –  has poured money and resources, including 4,000 staffers, into Iowa, Colorado, Georgia, Arkansas, and North Carolina in an effort to expand the electorate and create a rising tide that lifts just enough Democratic boats to save the majority.

The project is named for the street that Colorado Senator Michael Bennet’s campaign was headquartered on during his improbable victory in the 2010 elections. Think of Harry Reid’s miraculous ground game that helped him buck a national trend despite a truly terrible economy in Nevada… and then imagine those tactics being applied on a national scale for Democrats.

Republicans may have plenty of money, and a natural advantage in 2014. But they didn’t have a ground game that was anything comparable to that of the Democrats, either in 2012 or today.

Add up all of the balls in the air – Kansas, Georgia, South Dakota, Iowa, and to a lesser extent Kentucky – and combine them with states where Democratic incumbents have a fighting chance, and it’s clear that both parties have plausible paths to a Senate majority. The Senate could narrowly stay in Democratic hands, which will give President Obama free reign to continue transforming the nation’s courts in his final two years, while also preventing all manner of GOP mischief in this age of default threats and government shutdowns.

Or Mitch McConnell could take over the body, and anyone who’s already sick of D.C.’s dysfunction can rest assured it will only get worse. And with control of the chamber at stake, there’s one simple way for Democrats to stop him: get out the vote.

Another tax hike on cigarettes and cigars gets kicked around

July Letters to Jim: COVID-19 and protests around the nation