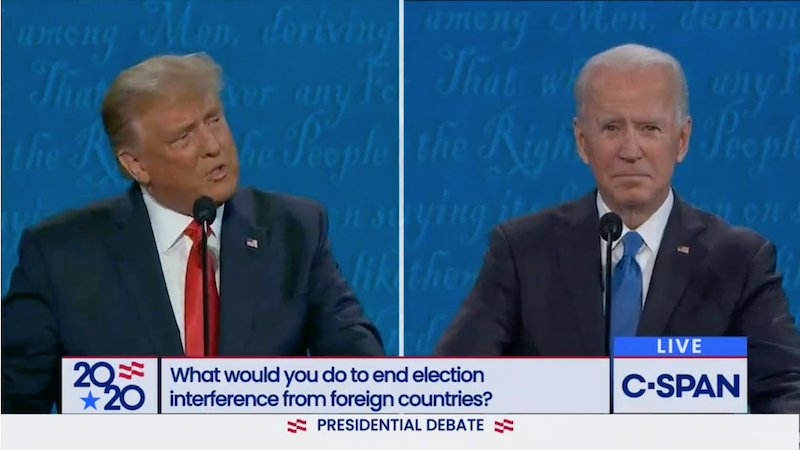 President Donald Trump and former Vice President Joe Biden sparred for more than an hour-and-a-half on Thursday evening during the second and final presidential debate of the 2020 election season.

A CNN Instant Poll released on Friday morning found that a slim majority of voters who viewed the debate-53%-said that Biden won-compared with 39% who said Trump won. And a YouGov America poll released around the same time found that 54% of respondents said that Biden won and 35% said Trump won. Conversely, nationally renowned Republican pollster Frank Luntz said that Trump won the debate. However, Luntz also said that he believes Trump is very unlikely to win the Nov. 3 election.

Salling, who is running for Congress in the second district, added: “He (Trump) brought the facts about the things that are of constant controversy on Biden’s side. For instance, fracking is a very good issue. He (Biden) has gone back and forth with this over and over and over. And there is no consistency in that. And so people are confused.”

Salling went on to praise Trump’s handling of the pandemic and said Biden’s criticism of the president’s leadership on that issue has not been very consistent.

“I think the president has gone above and beyond. He closed the borders. He closed China from coming in. He has given every opportunity for the local governments, the governors-to do their job. And Biden is constantly coming back saying that he (Trump) went too quick and that he didn’t go fast enough. I’m sorry. I’m lost on that also.”

Sen. Cory McCray (D-Baltimore City) said Biden did a better job than Trump of emphasizing his support for a federal $15 an hour minimum wage. In 2019, McCray was the lead sponsor of legislation that will raise Maryland’s minimum wage to $15 an hour by 2025.

“I was happy to hear that both of the candidates believe that the $15 minimum wage should be somewhat in effect. Biden was very very direct that he believes that it should happen because this is the correction course that is necessary for America to move forward. But Trump was very indecisive. While he said that he supports it-he didn’t speak as though this was the right moment. And I find that very questionable for all the families that are out there struggling that don’t even make $15 an hour.”

A recent Goucher College poll showed Biden leading Trump in Maryland 61% to 30%. No Republican has won the state in a presidential election since George H.W. Bush in 1988.

“I think it’s utterly ridiculous. I don’t know why he would always do something like writing his father in or Reagan. I think it’s sad. You have a party that you support. You have the people that you’re supposed to support. And I know he rides the purple wave. But, I think, in all respect-you vote for one or the other. You don’t go down the lines and vote for somebody for whom the vote means nothing.”

Working in Columbia: Downtown and business parks went up and down with economy