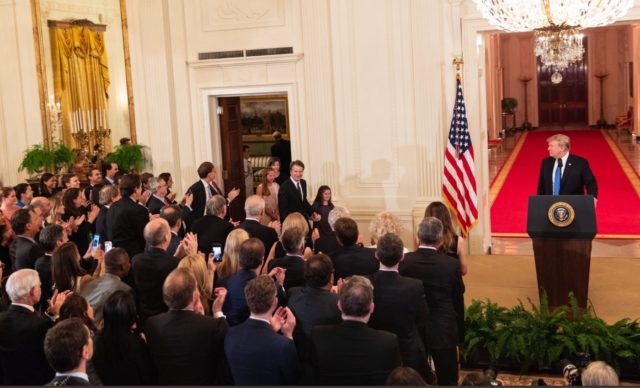 President Donald Trump announces Monday night at the White House that he has nominated Brett Kavanaugh to become the next Supreme Court justice. (WhiteHouse.gov)

“Criminal investigations targeted at or revolving around a President are inevitably politicized by both their supporters and critics,” wrote Kavanaugh, a longtime Washington insider who had served as a clerk to Kennedy, an aide to former President George W. Bush and a key investigator in the probe of former President Bill Clinton.

“The indictment and trial of a sitting President … would cripple the federal government, rendering it unable to function with credibility in either the international or domestic arenas,” Kavanaugh wrote. “Such an outcome would ill serve the public interest, especially in times of financial or national security crisis.”

The view expressed by Kavanaugh seems to indicate a shift from his work with former Independent Counsel Kenneth Starr, when the appeals court judge co-authored a report arguing that Clinton could be impeached obstruction of justice for lying under oath about the Monica Lewinsky affair.

Kavanaugh, who had been among the two finalists when Trump nominated Justice Neil Gorsuch to the high court, has generally, though not always, expressed conservative views in his opinions, and is widely viewed as an “originalist” and a “textualist” who interprets the Constitution as the Founding Fathers intended, in the mold of the late Supreme Court Justice Antonin Scalia.

Some conservatives have argued, however, that Kavanaugh has not been conservative enough on issues including abortion.

In Garza v. Hargan, he wrote an appeals court panel decision vacating a district court decision requiring the federal government to release a pregnant illegal immigrant teen in custody so she could have an abortion. The full circuit reversed the panel’s decision, but Kavanaugh dissented, calling the ruling a “constitutional principle as novel as it is wrong: a new right for unlawful immigrant minors in U.S. Government detention to obtain immediate abortion on demand.”

Kavanaugh also has generally limited Obama-era environmental regulations and pushed back against expansion of the authority of administrative agencies.

Like Gorsuch, Kavanaugh, a Catholic, attended Georgetown Preparatory School in Washington and graduated from Yale in 1987 and Yale Law School in 1990.