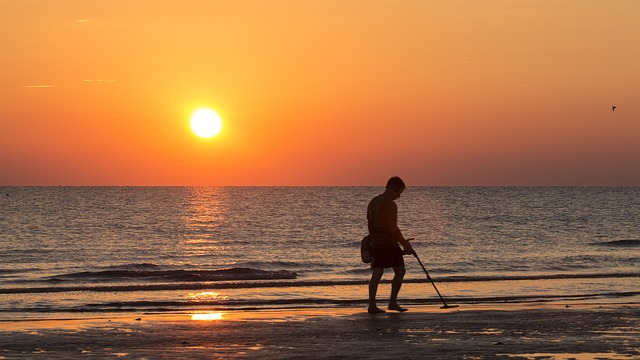 Metal detecting has been seen for a long time as a hobby for retired people, with too much time on their hands. But the times are changing and this activity is being picked up by all kinds of individuals, form parents wanting to try different activities with their kids, to college students with a passion for history. All avid metal detectorists will tell you that nothing compares to the satisfaction brought by an unusual discovery and there is enough evidence to sustain this.

But no matter if you’ve been doing this for a while now or if you are new to this activity, you should follow the rules listed by The Federation of Metal detector and Archaeological Clubs at any time and check state laws to avoid any legal issues involving your discoveries. As the first line on the Code of Ethics says, “I will always check federal, state, county and local laws before searching. It is my responsibility to know the law. “

If you are still interested in picking up this hobby, here are a few places to get you starting treasure hunting in your local area:

Before heading into town with your bounty hunter metal detector, why not start on your own land? Most houses have been built on territory that was previously used by other owners, so chances of finding hidden treasures are considerable. Even if you think you know your land, there might be things you had no ways to be aware of. This is also a good opportunity to get used to how your metal detector is working. Take it for a hunt in the back yard and listen to the beeper, to get accustomed with the sounds, before going treasure hunting in more challenging areas.

Being really circulated areas, these places are perfect for finding coins, jewelry and small objects. You might find more than you expect under the benches of school sports fields, as many people lose things from their pocket when they sit down or jump with excitement. Some schools carry out their activity in old buildings that were previously used for other purposes, so there might be some other interesting things you can find there, besides nickels and lost rings.

These places are highly visited by tourists, which make them a great place for interesting catches. Visit your town square, museum yards and other places where people gather. Look for places with grass, where people can lay on blankets and might miss something falling from their pockets. If you live in a city highly visited by tourists, you might be in for some international treasures as well.

Old fields from abandoned farms are very likely to have been involved in some form of historical activity, so finding antique objects is very likely. Look up old and abandoned buildings or farms in your town, but do ask for permission if they are private proprieties. You would not want to end up with a fine for trespassing.

Being the place where thousands of people gather up daily, it’s perfect for finding loose coins and forgotten objects. Look for the places where people have been seating, like playgrounds, benches, under the trees or near bodies of water. Experienced hunters use parks as their go-to area, so don’t be surprised if you’ll find other people who share the same hobby as yours there.

Forests were and still are used for various gatherings, from picnics to dog walking, hiking and other outdoor activities. And we all know that those activities might often involve dropping something and declaring it lost forever. Well, for a treasure hunter that means lots of potential new findings. Look for footpaths through the forest and scan a bit beyond the original width of the path, as they might have been less used in the recent period and might have closed in.

Probably the most popular area for metal detecting and other treasure hunting, the beach is filled with hidden gems, as they are always used by people. Chances are you will stumble upon a few interesting objects in this area. The best place to scan on the beach is the wet sand and the area where people usually lay on the towels to sunbathe.

The bottom of small bodies of water are unexplored areas that will surely bring you some unexpected gifts, if you are brave enough to dive underwater. However, these types of locations require some special equipment. For your own safety, use diving equipment and to make sure your search is not in vain, invest in a metal detector that can be used underwater, especially if you plan on searching salty water. Due to the high mineralization, some of the detectors might nor pick up information well if they are not specially designed for these conditions.

If you are lucky enough to live near a historical site, don’t lose any more time and head there right away. There have been numerous important findings on battlefields, that not only were profitable, but were also of great historical importance. Pistols, muskets, metal pieces of uniforms or medals are just a few examples of what you can find int hose areas. For example, Baltimore, one of the biggest port cities in North America during the War of 1812, has a multitude of such areas, as it was the sight for one of the most important battles in American History. Check out with your state’s code of practice involving historical sites and inform the archaeology department in case you stumble upon important findings.

If you want to go for a trip outside the city, look for old towns that are not inhabited anymore. Old mining towns that have been vacated hold lots of treasures. And the trading activities that used to happen in transportation towns make them the best place for finding old coins. But do check with local authorities, to make sure the town was not turned into a protected area and might be restricted.

Milwaukee, the third most segregated city in America, will host 2020 DNC

5 Tips to Buy on the Internet

One thought on “Top 10 Places to Go Metal Detecting”