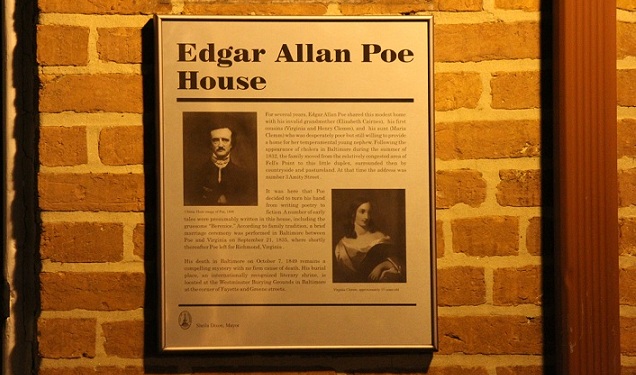 The last time I watched a John Cusack movie he was a hero in the film 2012, managing to get his family on the boat as the world collapsed. That was the actor. But Cusack and his fellow thespians and producers missed the boat in Baltimore when his latest movie, The Raven premiered here.

I don’t plan to see it for good reason.

You would think as an actor  that the cast, the crew, the writers, the producers, the director, the make-up artists or the donut boy might have researched a little bit about Edgar Alan Poe and then perhaps did something about it. Maybe they would make a call to Baltimore.

If anyone bothered to research, they would have learned that the City of Baltimore no longer will fund or maintain the Edgar Allan Poe House and Museum. With budgets being tight, the city can’t afford it.

Poe means a lot to Baltimore. He died on these streets in Fells Point after reportedly taking his last drink in The Horse You Came In On where legend says his ghost still roams the place. His tombstone is a stone’s throw away on Greene street. His home at 203 Amity St. is a historical museum that unless someone comes up with $85,000, it will be nevermore.

Oh, there are other Poe landmarks – the Old Stone House  in Richmond, but Poe never lived there, and The Spring Garden home in Philadelphia, and the Edgar Allan Poe Cottage in New York.

But the Baltimore house is the earliest house that Poe lived in that has not been torn down. He was 23 when he lived here  and it’s where the Edgar Allan Poe Society breathes. This is a treasured landmark much like Lillie Jackson’s house, the mother of the civil rights movement, whose museum suffers a similar peril and awaits matching funds before it can open again.

Hollywood had a chance to do some good will. The Raven director James McTeigue and co-star Luke Evans staged an event at the Westminster Cemetery to promote the movie.  And then they left. Cusack and the others were too busy to stop by. They would rather have us  watch a film than open a book.

We wished they would have stopped or come back and got a hot dog at the family-operated G&A Coney Island Hot Dogs restaurant on Eastern Avenue in Highlandtown because that’s where some real heroes are. In this landmark eatery sits the Davids fighting the Golliaths and a fish bowl of coins.

The  fish bowl is the start of a Pennies for Poe Campaign, launched by one of Baltimore’s cherished and beloved writers, Rafael Alvarez, who also graces us with his work at Baltimore Post-Examiner. He was moved to start the campaign after teaching middle school students in Fells Point about a similar campaign started by school children 100 years ago to buy a tombstone for Poe’s grave on Greene street.

When he asked the children, if they wanted to save Poe’s house, they gave an exhilberating, “Yes!!” That’s all Alvarez needed. Alaverz turned to the Pratt Library. They rejected the idea. Too much paperwork. He turned to First Mariner Bank but they had their own problems. Then he turned to his close friend Andy Farantos, the manager of G&A Coney Island Hot Dogs restaurant.

No hesitation. Farantos placed a fish bowl on the counter.  In a few weeks they got about $316 – a far cry from the $85,000 needed. Poe probably could relate.  He was not a rich man. He reportedly earned $60 from his poem “The Raven,” while Hollywood is still counting the Benjamin Franklins grossed from the movie.

How much money did anyone from the movie dump into the fish bowl?

How much  money did the film gross in the first weekend from ticket buyers like Baltimore’s blue-collar working class?

Something wrong with this picture.  It doesn’t seem right.  Does it?

They could have done something. And while some proceeds of the screenings of the film has gone in part to help maintain the house, you would think for a public relations campaign they could have easily rasied that $85,000. That’s a day without donuts and coffee on the set. Big sacrifice.

Instead, blue-collar working people are the ones who are coming to the aid of the Poe House. No one very famous. Just people who will make sacrifices in a city that is financially hurting with foreclosures and job losses.

Next time you are looking for a hero, you don’t have to look far. They are right here in our city. They don’t show up for a day and do the Hollywood thing and leave.

No. The hero in this story are Baltimoreans like Alvarez who was so moved by the children who cheered, “Yes,” when he asked if they wanted to start a Pennies for Poe Campaign.

The heroes are people like Farantos who picked up the fight when the Pratt Library and M&I Bank and the city turned the other way.

And the heroes are the children who inspired this movement and are more than willing to donate what little money they have  in a fish bowl to do something monumental. The children have no doubt they will reach that financial goal.

Funny thing about Baltimore children. They still believe in the old slogan that City Hall gave up on – Baltimore: The city that reads.  They want to read about Edgar Allan Poe at his house and museum.

One thought on “Save the Poe House”