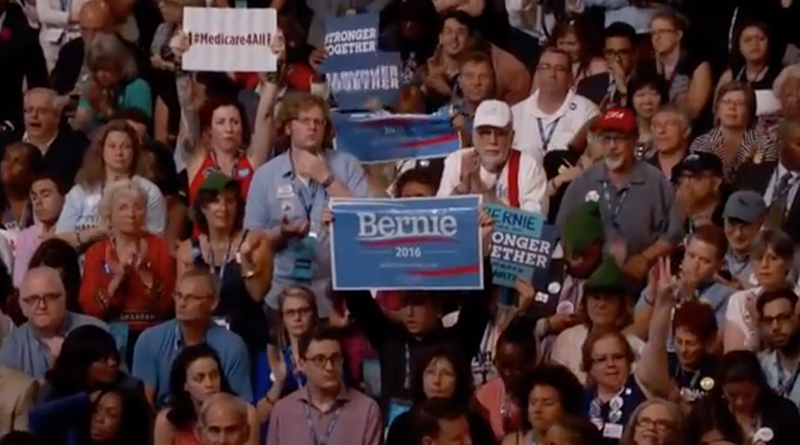 PHILADELPHIA: For the first hours of the Democratic National Convention on Monday, the mere mention of Hillary Clinton’s name was met with a roar of boos from Bernie Sanders’ delegates throughout Wells Fargo Center.

The senator from Vermont delivered the keynote address Monday night and doubled-down on his endorsement of Hillary Clinton as the Democratic nominee. Despite this message, many Sanders delegates staged an after-hours protest inside the arena close to exits, chanting the call-and-response of “Show me what democracy looks like. This is what democracy looks like!”

On Tuesday, pro-Sanders protestors gathered across from Philadelphia’s City Hall for the “Million Berner March” rally. The demonstrators all had one simple message: Never Hillary.

A number of chants erupted amongst the crowd, including “Bernie or Bust” and “Jill not Hill,” referencing Green Party nominee and progressive politician Jill Stein of Illinois. Progressive YouTube host, Tim Black, spoke at the rally, giving his full support behind  Stein and saying of Hillary: “If the policy don’t fit, we must quit.”

While most of those participating in the Million Berner March completely reject the prospect of voting for Clinton, not all of the Sanders supporters were sold on Stein.

Gio Zane, a 34-year-old resident of Point Pleasant, N.J., said that he would be voting for the Republican nominee, Donald Trump, this November. Describing his perspective as libertarian-leaning, Zane said his message to all former Sanders supporters boils down to this: “If you’re in a swing state, you’ve got to vote for Trump.”

During Tuesday’s roll-call vote for the Democratic nominee, Sen. Sanders left many of his most ardent delegates stunned as he motioned to suspend the rules of the convention and nominate Clinton immediately.

The motion was received by the chair Baltimore Mayor Stephanie Rawlings Blake, seconded, and passed by the roar of a voice vote. Scorned, hundreds of Sanders delegates left their seats and departed the convention floor en-masse in protest — shouting, “Walk out. Walk out.”

Some Clinton supporters inside the arena wept as the party now appears more divided than the Republicans.

The dissatisfied Sanders delegates held their demonstration inside of the arena, chanting “Bernie or Jill.”

The spurned delegates then exited Wells Fargo Center and occupied the media pavilions right outside the convention, where they continued to protest Clinton’s nomination. Rows of police officers observed the peaceful protest as it carried on throughout the night.

The half-empty arena then awaited for its key note speaker President Bill Clinton, who delivered a powerful speech, calling Hillary his best friend and the real change maker. Clinton rarely talked about his eight years in office where he helped spur an economy and created 21 million jobs, but also signed a crime bill that put many African-Americans in prison for years, which Hillary now says was a mistake.