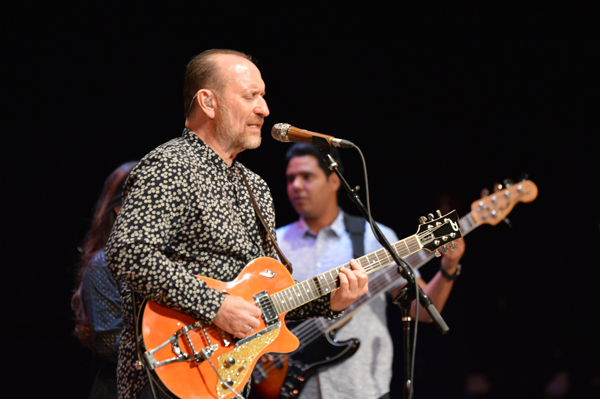 Colin Hay, best known for his role as lead singer for the band Men at Work, gave a sellout crowd at Francis Scott Key Auditorium on the campus of St. John’s College in Annapolis a sweet and often melancholy musical trip back to the 80s, as well as a walk through his solo work in the years since.

Presented by the folks at Rams Head Annapolis, the night’s show also featured Willie Nile as the opening act. He brought a guitar-driven four-piece act that delivered a show perhaps best described as Lou Reed joins the Replacements to play late-era Clash. The highlight of the high energy set was a fuzzed up rendition or Reed’s classic Sweet Jane.

Hay opened his set with a four-song block of Men at Work tunes Down by the Sea, Who Can It Be Now?, I Can See It in Your Eyes and Catch a Star before journeying through a collection of his solo work.

Much of the night reflected a slightly dark and self-deprecating humor, with Colin joking before diving into his solo material about how no one wanted to hear the new songs.

“Well, I’m going to play you a new song with complete confidence” and jumped into Tumbling Down a previously unreleased song, that ended up getting a very warm reception from the fans.

The bulk of his solo songs were themed around loss, missed chances, and regrets, which combined with the minimalist light show left me entertained, but a bit heavyhearted.

Hey returned to the Men at Work catalog to finish the show and raise spirits with some of his biggies It’s a Mistake, Overkill, and Down Under, which featured some extended soloing from the individual band members and an air flute riff from band member and wife Cecilia Noel.  Noel also took lead vocals on a salsa-fied version of AC/DC’s You Shook Me All Night Long a track from her latest release Havana Rocks.

Hay and the band remained on stage between the set’s end and the encore, joking how nobody does anything backstage during that time anyway, and concluded with a pair of solo songs Waiting for my Real Life to Begin and Next Year People.