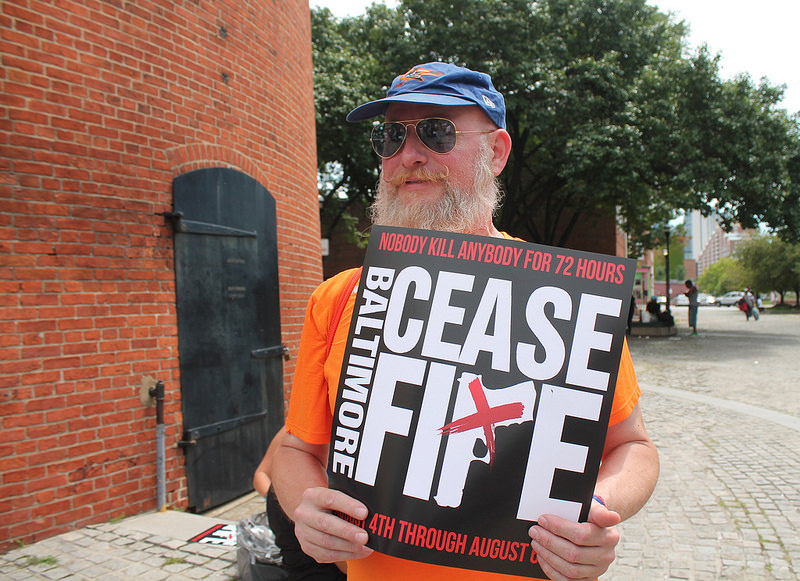 The recent Ceasefire movement in Baltimore – a call for violence-free weekends – is another example of citizen-led action that Nate Loewentheil is advocating in this commentary. Photo by Elvert Barnes with Flickr Creative Commons License

Baltimore is a proud, energetic city caught in a downward spiral of violence and crime. Last week, Gov. Larry Hogan announced new initiatives to crack down on Baltimore’s most violent criminals, including expanded patrols by Maryland State Police and tougher sentencing laws for repeat gun offenders.

Confronting the most violent criminals in Baltimore is vital, but the homicides and shootings are only the most extreme expression of a much broader wave of crime gripping the city. To address this broader challenge, Baltimore City and the state of Maryland should begin working together to empower grassroots, citizen-led solutions to crime and violence, tapping into the creativity of our citizenry to implement solutions at the family, block and neighborhood level.

We should fuel this work through a new statewide community safety “Block by Block” grant program.

Sociologists have long understood that crime spreads from person to person, much like an epidemic. Individual criminals become more brazen; others imitate the success they see.

A rise in street crime drives people into their homes, which in turn makes the streets that much more dangerous. We are seeing this process play out in Baltimore in real time. Over the past three years, street and property crimes have risen alongside the homicide rate.

A community activist in the Greenmount West neighborhood in Baltimore, for example, told me about her failed efforts to shut down a corner store that was openly selling robbery kits, complete with a bb gun and ski mask. Meanwhile, neighborhoods that were once relatively crime-free now accept home break-ins and muggings as a daily part of life.

Building on the work of Mayor Catherine Pugh, Gov. Hogan’s approach can help get the most violent criminals off the streets. But that won’t stop the broader downward trend. For that, we need to deepen community engagement.

Some of the most powerful examples of neighborhood turnarounds in Baltimore have been driven from the bottom-up by citizens banding together to address blight and crime. In the process, they have reset communities’ norms and expectations.

In my own neighborhood of Highlandtown in southeast Baltimore, for example, a group of neighbors has held a safety walk every week for years, slowly but surely discouraging vandalism, cleaning up corners and reducing drug traffic. The recent Ceasefire movement in Baltimore – a call for violence-free weekends – is another great example of citizen-led action.

Recent academic work suggests the power of this bottom-up approach to crime reduction. For example, a study in the American Sociological Review found that neighborhood associations and other local nonprofit organizations have a major impact on crime rates. Looking at 264 cities over 20 years, the study found that for every 10 additional nonprofits per 100,000 residents, there was a 9% decline in the murder rate.

We need to embrace a grassroots approach to crime reduction by providing new sources of funding. Given Gov. Hogan’s commitment to addressing crime in Baltimore, and the limitations on the Baltimore City’s budget, one approach is to create a statewide community safety grant program that provides funding directly to small, neighborhood-based nonprofit organizations – like community associations, churches, service groups and community development corporations.

Such a program could be funded and administered by the State of Maryland through block grants to Maryland’s municipalities and counties, which would in turn re-grant the money competitively to small nonprofits: a Community Safety “Block by Block” Grant program.

What funding could support

Funding could support things as simple as public surveillance cameras or automatic porch lights for rowhomes on dark streets; flashlights and supplies for a neighborhood watch group; small-scale blight reduction; or after-school programs in neighborhoods with high levels of juvenile crime.

The key would be that the interventions are designed and implemented by small, neighborhood-driven organizations that understand the specific challenges facing their corner of the community and can engage families and neighbors directly.

Funding for grassroots violence reduction programs and projects is a complement to existing social programs and public investment, not a substitute; nor does such funding stand in for prosecutors and judges. But by decentralizing resources through a block grant program, the city and state can capitalize on our greatest asset: the energy of committed citizens.

Nate Loewentheil is a candidate for the Maryland House of Delegates in the 46th Legislative District.

Nixon, Watergate, and the JFK assassination