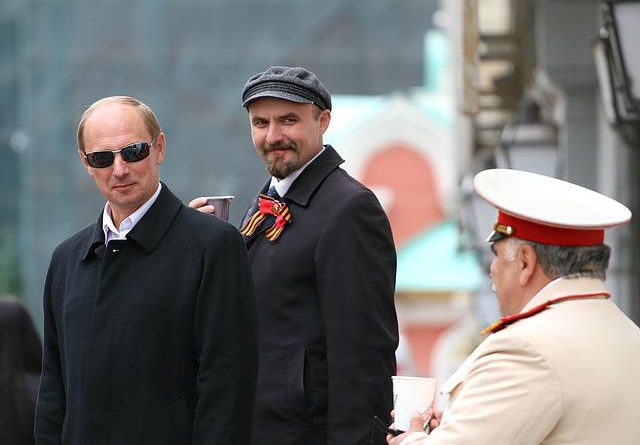 Marking the end of the Cold War, in 1991 members of the Soviet Union broke their 70-year-old empire into 15 independent nations.  In 2014, beginning with his invasion of Ukraine, Vladimir Putin began putting the pieces back together again.

The centerpiece of Vladimir Putin’s obsession with Ukraine is his rejection of its independence and his insistence that this large, populous, and resource-rich region is an essential part of Russia.

Following World War II the Cold War pitted the communist-ruled Soviet Union and Eastern Europe against the Western democracies.  To counter the growing Soviet military threat, Western European states, along with the United States and Canada, in 1949 formed the North Atlantic Treaty Organization, at first a 12-nation military alliance. Shortly thereafter Turkey and Greece joined NATO in 1952, followed by West Germany in 1955.

Responding to an expanding NATO, the Soviet Union, in 1955, created its own unified military alliance, formally the Treaty of Friendship, Cooperation, and Mutual Assistance, but better known as the Warsaw Pact.  Linking together  Albania, Bulgaria, Czechoslovakia, East Germany, Hungary, Poland, and Romania the Pact formed a continuous anti-NATO bulwark extending from the Baltic Sea in the north to the Black Sea in the south.

By the 1980s tensions between the two military alliances were headed for a political and economic showdown.  With the capitalist economies of Western Europe out-performing the centrally planned Soviet economy, political unrest in Eastern Europe was about ready to boil over at any time.

Mikhail Gorbachev, head of the Soviet Communist Party, set in motion in 1985 a series of desperate reforms to loosen the Kremlin’s top-down control, increase productivity, and give leaders in the Warsaw Pact countries more autonomy.

Three years later, Gorbachev’s reforms had actually generated greater unrest within the Soviet-led alliance.  Communist governments were swept out of power and, in 1989, the Soviet empire was shaken by its first Humpty Dumpty moment.  Mr. Putin, a Soviet KGB officer stationed in East Germany at the time, enjoyed a ringside seat to watch the symbol of Soviet oppression, the Berlin Wall, fall.

In late 1991 Gorbachev resigned. His reforms were no longer a viable option.  The Soviet Union’s final Humpty Dumpty moment arrived as the 15 Soviet Republics declared themselves separate, independent countries.

To explain, at least in part, Putin’s obsession with an independent Ukraine, we need to look at NATO’s push eastward after his rise to president of Russia.  While the West appeared to win the Cold War in 1991 with the collapse of the Soviet Union and the Warsaw Pact, NATO did not declare victory and disarm.

In Putin’s first year as president Poland, the Czech Republic, and Hungary—all once Warsaw Pact allies of the Soviet Union—were admitted into NATO.  Estonia followed in 2002.

And then, in 2004, NATO welcomed former Soviet republics, Lithuania, Latvia, and two more former Warsaw Pact countries: Romania and Bulgaria. Finally, in 2009, Albania, the last former Pact member, got a seat at the NATO roundtable.

While the old Soviet Union was all Putin had ever known, he took over when Russia stood alone.  The former Soviet republics were independent countries and Russia’s former Warsaw Pact allies were now members of NATO.

Fear that NATO might one day snatch away Ukraine, the last remaining westward-leaning country on Russia’s doorstep, and crush his dream of a restored Russian empire, explains, in part, Putin’s obsession with Ukraine.

He is gambling that all of his tanks and all of his men can,  one by one,  put the shattered pieces of the Soviet Union back together again—first Ukraine, then Moldova, then…

Baltimore City, You’re Breaking My Heart: This is why people leave