“No substantive progress has been made in the talks between the White House and the House over the last two weeks,” Republican Speaker John Boehner told reporters Thursday night.

But this is no setback for President Obama. It’s the end-game of a plan more than a year in the making, the work of patient, skillful governance by the Administration. And it’s the consequence of a permanently radicalized GOP base that refuses to negotiate.

The Republican dilemma is simple. If they don’t cut a deal soon, taxes will jump in January – and they’ll have to bargain with Obama if they want him to bring them down. But if they cave in now, Obama will succeed in his central campaign promise to cut taxes for 98% of Americans while raising revenues from millionaires and billionaires.

Strategically, it’s a no-brainer: the GOP should take the better deal now instead of the worse deal later.

Getting ready to cave

But the right-wing Republican base has come to view even the smallest compromise as an apocalyptic betrayal of conservative values. And most of their representatives have already begun thinking about the 2014 elections.

So even as they maintain a defiant posture in the media, Republicans leaders are starting to search for a way to give in.

Senator John McCain (R-AZ) speculated on Fox News Sunday about “a limit on the amount of deduction on charitable giving…[and] home loan mortgage deductions,” and Senator Lindsay Graham also proposed to “cap deductions” on ABC’s This Week. Other Congressional Republicans have floated similar tax-raising trial balloons – all meant to test for a conservative backlash.

So far, conservatives aren’t buying it.

Democrats, meanwhile, are calling for a quick compromise – but that’s not what they want, either.

As Ezra Klein wrote in October, the Democrats’ plan “is to push the Republican Party off the fiscal cliff, and then force them to reach out in order to get pulled back up.” That way, President Obama will have even greater leverage when the time comes to make a deal.

The Administration doesn’t expect Republicans to agree to the deal they proposed Thursday – a veritable wish list of liberal priorities readily summarized as “taxes for the rich and help for the poor.” Just the opposite: they expect outrage from the Republican base, and paralysis from Republican leaders.

Expect even more baiting like this from Democrats in the coming weeks. You’ll read loud pronouncements that “elections have consequences” – pronouncements meant to exacerbate right-wing resentment over Obama’s second victory. You’ll hear frequent reminders that the compromise Republicans must make is over a core issue that they’ve long considered non-negotiable – reminders meant to further entrench Republican resolve.  And you’ll notice lots of deliberate confidence that Republicans are powerless to stop the Democratic agenda – meant to dare them to do just that.

The Republican base would rather drag their own party over the fiscal cliff than compromise with President Obama. He’ll be happy to let it happen.

While She Sleeps will be live at Fillmore 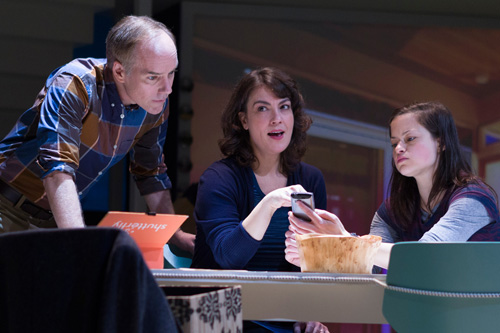 Next to Normal: Less than lyrical rock musical meanders aimlessly at Centerstage