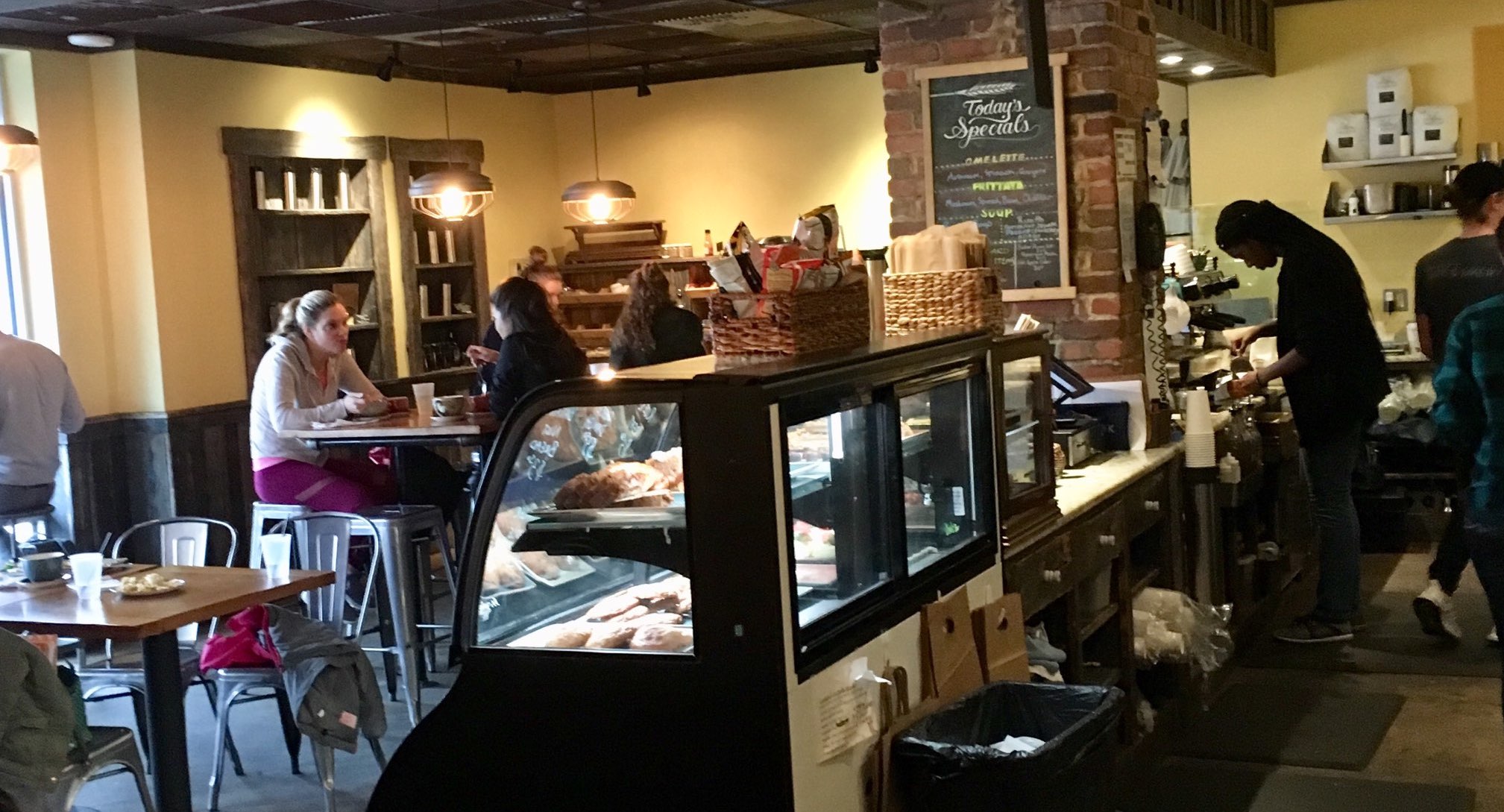 Sunday brunch I know is popular with my crowd. And I suspect many in your circle of friends like it too.  So with that in mind, I journeyed to two local restaurants to check out their brunch. I’ll begin at Cunningham’s Café & Bakery in Towson. It’s located on the lower level in the high rise office building at that infamous Towson Circle (1 Olympic Place). On the first level is the more expensive and fancy Cunningham’s.

The Café is open Monday through Friday from 7:30 a.m. to 5 p.m. and Sunday from 8 a.m. to 3 p.m. It’s very casual and seats about 30. In warmer months there’s outside dining. They accept no reservations so just walk in, stand in line and order. You’ll get a number. The food will be brought to you by a very attentive staff. Several times a week the menu, shown on a big board, will change. There’s also a printed menu. 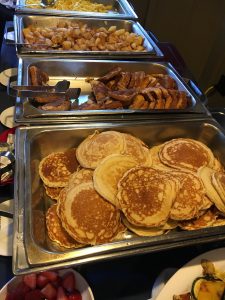 The food focuses on locally sourced food. The group that owns Cunningham’s, and other local restaurants, also own a farm in Monkton. From there they get most of their produce and meat. This helps with costs and to ensure freshness.

I ordered more than one item to be sure I got a taste of as many as possible. Restaurants seem to believe that so I’ll keep on saying it.  I liked them all, but my favorite was the pancakes. They are described as the crème Fraiche pumpkin pancakes. It comes with macerated strawberries, that almost sounds painful, pumpkin spice whip crème and maple butter syrup ($8.00). Incidentally, all syrups are made in-house. As are the chocolate, Nutella, and butter.

I was shown a very fancy espresso machine which can make, ‘any drink related to expresso’, as told to me by the manager.  That would include lattes, mocha, cappuccino, and macchiato. All staff is trained to operate it.

Besides the pancakes, another brunch favorite is the Bagby breakfast burrito ($9.50). This consists of scrambled eggs, housemade bacon, cheddar cheese, Pico de gall, smashed avocado, home fries, and black beans.  Quite a dish. You also might want to try the Bagby market breakfast ($9.00). This is made with two farm eggs any style, housemade bacon, sausage, or farm fresh ham steak, home fries and toast or English muffin. 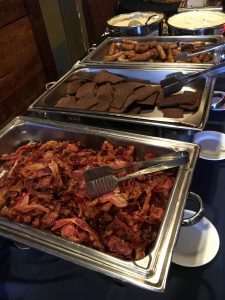 OK, we are now leaving Towson and heading to Middle River to stop at By The Docks. I was there for dinner recently, but, as the subject of this article reads, it is time for brunch. The exact address is 3321 Eastern Blvd. They are located very close to the Bengies Drive-in so use that as a landmark.

Their brunch is offered Saturday and Sunday from 9 a.m. to 2 p.m. Reservations are a very good idea. When I left people were waiting in line. The cost is $19.99, but if you want bottomless drinks to add $10.00. Believe me when I tell you won’t leave here hungry. If you do, hey that’s on you.

Locally owned and operated the owners wanted to create what they thought was a true brunch. I think they succeeded. John, own runs the restaurant with his wife Vicky, told me their brunch is not unlike the ones you would see at a top resort. Of course, it is all you can eat and the choices go from breakfast items like pancakes, french toast and cream chipped beef to chicken teriyaki, shrimp, mussels, oysters, fish, chef specials and more.

Many of the staff have been there for years so you can expect and receive good service. Running a restaurant, any size or food type, is not easy. John seems to have the process down pretty good. He comes from a restaurant family. They also own the Double T Diners and Ya Yas Bakery on Philadelphia Road.

Crab cakes are not offered on the buffet, so you have to go back at lunch and dinner. I live in Pikesville and it’s worth the trip around the beltway. 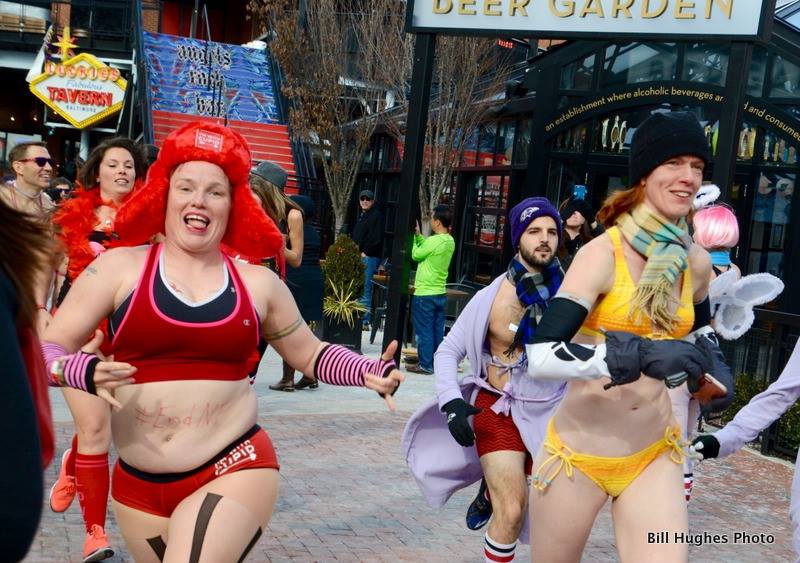 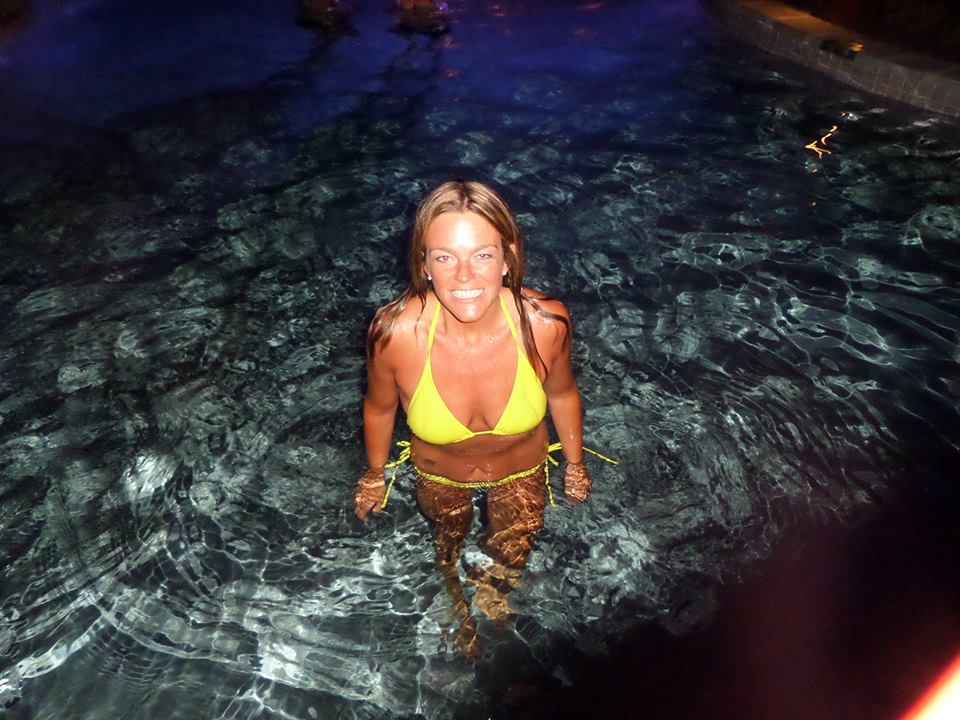 What I learned about being a woman at 40