Photo above: Floyd Mayweather, Jr. took the podium at the post-fight press conference to talk about the fight.

It was the big night Saturday in the Garden Arena of the MGM Grand Resort-Casino in Las Vegas. The famous Strip is always busy on the weekends, but today, it is not only crowded, but the long street of hotels and their casinos is buzzing with excitement. Everyone here this weekend has been waiting for this one event tonight. Every sports book in town has been busy with the usual sports betting, but it’s especially busy today because of this, the Fight of the Century, between Floyd “Money” Mayweather and Manny “Pacman” Pacquiao. Even McCarron International Airport is full; no more private jets were allowed to park at the airport because the lot was full.

Every parking lot was full; the MGM Grand closed its parking lot early Saturday Morning and everywhere in Las Vegas was charging at least 20 dollars to park. Here on the Strip, close to the MGM Grand, it was a lot more.

If you have been watching all the hype, the TV commercial said all roads end here at the MGM Grand and judging from all the people coming into the MGM it looks like that could be true. Even the Kentucky Derby was over-shadowed by this fight. American Pharaoah won by a length, if you’re wondering.

This was a long night of boxing; there were six under-card bouts before the main event. This fight was so big it was a pay-per-view event available on both Showtime and HBO, and everyone said it is breaking all records. So far there have been over $300 million dollars in pay-per-view orders and the promoters are still counting, some predicting it will more than double that once all the receipts are counted. It’s a big payday for Floyd “Money” Mayweather, Jr., who gets 60 percent of the revenue.

Because the fight was featured by both Showtime and HBO, there were two ring announcers for the fight: Jimmy Lennon, Jr. of Showtime and Michael Buffer of HBO. His call of “Let’s get ready to rumble” has been trademarked and fight fans got to hear it Saturday.

Both fighters wore custom designed and fitted gear, including Floyd Mayweather’s mouthpiece, which cost 25 thousand dollars and has diamond dust, gold flakes and a 100 dollar bill cut-out. Nike provides all of Manny Pacquiao’s gear and most of it will feature the colors or the flag of the Philippines. The winner will receive a belt sanctioned by the WBC that will be worth over a million dollars and feature thousands of emeralds making up the logo. It will also feature the faces of both fighters.

Everything about this fight is big, from the promotions and hype, to the price tag on everything. It is scheduled for 12 rounds. Would the fighters go the distance? Or would we see a knockout? Everyone was speculating before the fight.

Once the main event started the fans in the MGM Grand Garden Arena got what they paid for: the fight of the century. It got off to a late start because there were so many pay-per-view orders the TV providers had issues, so the fight was delayed until everything was ready to go. But after the fight it was announced there were still areas that had issues and much of the Philippines lost the signal until the 12th round. For Manny Pacquiao’s fans, this was a fight you needed to see from the opening bell to the last.

It was a great fight that started out with Floyd Mayweather, Jr. dominating the first two rounds. Both fighters threw hard punches, getting at each other and for rounds three through six Manny Pacquiao dominated, winning the rounds.

But that would be it for the Pride of the Philippines. Mayweather was getting beaten; some watching the fight thought that during those four rounds Pacquiao might actually have a chance to win the fight, if he kept the pressure on Mayweather. Some actually thought Pacquiao threw more punches during the fight, based on the flurries Manny threw at Floyd.

It looked like his defensive style working against Mayweather in those four rounds, but he stepped up his game and started taking the fight to Pacquiao for rounds seven and eight. After winning those two rounds he felt confident enough to frustrate his opponent, dancing around the ring, forcing Pacquiao to chase him.

By the time we were half way through the tenth round it was becoming clear this fight would go to Mayweather, unless Pacquiao got a knock out. But that wasn’t the case. The fight went the distance, all twelve rounds and as predicted by many, a unanimous decision for Floyd Mayweather, Jr.

It was Floyd’s constant jab that kept Manny at a distance for most of the fight and it was clear Floyd’s five inches over Manny’s reach proved decisive. The Champion won the last six rounds, dominating this fight.

In the post fight press conference Mayweather was asked when he knew, in the fight, he had Pacquiao. He said, “I knew I had him from round one. I came up here (in the ring) and I feeled him out. I wanted to see his certain moves. I wanted to see his jab; if he used a jab I would counter over his jab. If he used his jab I could slide over, counter with a right hand or pull over with a jab and hit him with a jab. Everything is just calculating moves. I’m ten steps ahead of any fighter.”

In a move that shocked many boxing reporters Pacquiao claimed his shoulder was injured a few weeks ago during training. No one expected him to try and use an injury as an excuse, and the Philippine congressman said he wasn’t trying to do that, but as he sat on the dais for the press conference, which was on the ring to accommodate the large number of media people present, we could hear his lawyer coaching Pacquiao on what to say about the injury, that the Nevada Athletic Commission denied him the use of medication to control the inflammation.

It was a surprise and disappointing for many to hear that from Pacquiao. It sounded like his camp was trying to blame the commission for Pacquiao losing.

After most of the media left a representative from the Nevada Athletic Commission took the microphone and said, “It was never disclosed to the commission at the weigh in or on the medical questionnaire.”

Of Pacquiao’s claim of being hurt, Mayweather said, “I have two shoulder injuries, one of the left side, one on the right side and both hands were messed up, but I didn’t cry and complain, just did what I had to do. I respect Manny Pacquiao; if that’s what happened, then listen: don’t fight when hurt.”

That is the controversy. At the weigh in Friday I had the feeling something was fishy about this fight, but didn’t mention it in previous my report. It’s boxing so it always feels like there’s something fishy going on. They way the Pacquiao people were talking, and the Philippine champion thanking Mayweather for granting the fight, the mood of the Pacquiao team didn’t seem right.

Even on the entrance to the fight, they had Jimmy Kimmel following Pacquiao, dressed like Justin Beiber, mocking the Mayweather entourage that included Beiber. Pacquiao and his trainer, Freddie Roach, even stopped in the tunnel leading out the ring to take a selfie with Kimmel. It didn’t look like Pacquiao was taking this fight seriously at all. Did he even want to win?

The question people had right after the fight was why didn’t Pacquiao press Mayweather in those final rounds?

When Pacquiao said he thought he won the fight, it was hard to believe. It had to be clear to his corner who won that fight.

Mayweather was all business going into and during the fight. He didn’t clown around until the final rounds when he knew the fight was his.

It’s likely more news will come out about whether the Nevada Athletic Commission knew Pacquiao was injured. The latest news is the Pacquiao Team disclosed the injury information at 6:30 p.m. Saturday, too late for the commission to make a decision.

Five years ago Mayweather said this fight would never happen, that he would never again be involved with promoter Bob Arum, who represents Pacquiao, but there they all were Saturday Night, in the MGM Grand Garden Arena.

But it was a huge paycheck that got this fight to happen so it’s probably a good bet a bigger paycheck could get a rematch to happen.

Maybe someone should remind them to never say never.

(All photos by Claudia Gestro, unless otherwise noted.) 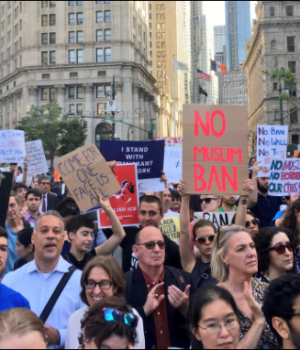 Is liberal disdain for Trump harsher than conservative disdain was for Obama?