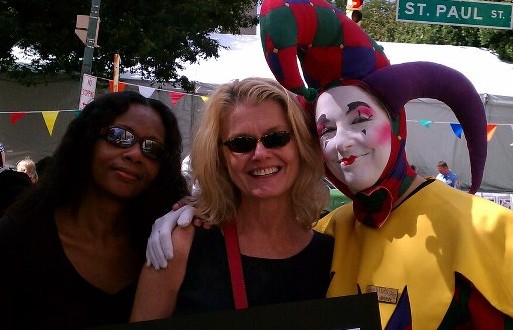 (Willett, me and mime Marianne Wittelsberger.)

Willett Thomas was a gifted writer with a kindness that was genuine.   A few days after her birthday, June 15, 2014, Willett was found in her home.  She had passed away.

I met Willett, whose fiction is published in The Baltimore Post-Examiner, through the Examiner’s founder, Tim Maier.  I had read the initial installment of her serial novel, The Charm Offensive, and told him how much I liked it.

“Let Willett know you like her work,” Tim told me.

I did and we became friends.

Willett and I would meet for lunch at the Owl Bar in the Belvedere on Chase Street.  The 111-year-old establishment would not serve ladies when it opened in 1903.   Willett lived a few blocks from it and we always sat near the Owl sculpture that is rumored to have blinked during the 1920’s to indicate the “coast was clear” for liquor during Prohibition.   In an authentic speakeasy, Willett and I shared the intimate details of our lives.  We had much in common and we turned it into fiction.

I remember how she answered an email I sent her almost two years ago, when I discovered that she’d been hospitalized:

Willett  received the 2008 Maureen Egen Writers Exchange Award for Fiction.  She had also received artist fellowships and studied writing at the Johns Hopkins University.  Willett serialized another novel, The Art of Becoming Unwired: A Novel and True Story in The Baltimore Post-Examiner.

At the 2012 Baltimore Book Festival, Willet and I strolled through Mt. Vernon.  It was a sunny, comfortable, lukewarm day and we stopped for the photo with the mime, Marianne Wittelsberger.  It was taken by her husband, Steve Bauer, the other half of their Jokesters mime duo.  That day, I also remember introducing Willett to Edward Doyle-Gillespie, Deborah Rudacille, Jen Michalski and Wayne Countryman, all local writers.

The last time we met, at the Owl Bar, I offered her a ride home.  Willett did not own a car and she declined.

I remember getting into my car and watching her from the rear view mirror.  Willett walked east on Chase Street and I headed west, toward Charles.

Had I known it would be the last time I would see her, I would have opened the car door instead of turning the key in the ignition.  And I would have given her one more hug.

She is deeply missed.