I shouldn’t even be writing this.

The problem with a serious answer to Republican would-be militants is that we shouldn’t take these people seriously. Like all bullies, they want to be thought of as a credible threat so that we’ll do whatever it takes to appease them. And they want to think of themselves as a credible threat, too. That way, they’ll never have to live in a world that demands inevitable compromise.

This is the psychology of fascism. Like most psychological disorders, you can’t argue with it. You can only give these people a reality check, and remind them that democracy isn’t here to protect liberals from their rightful right-wing overlords. It’s here to protect the right, too.

Consider this “thought experiment” by reader Clayton Cramer in a recent comment posted  on Dump the 2nd Amendment for the Privacy Amendment:

The government declares a national emergency, shuts down the Internet (except for government information sites), and censors newspapers and broadcast media. In response, 0.03% of the population (about 100,000 people) grabs rifles and starts to attack the national government’s leaders in random guerrilla attacks. Sure, many of the guerrillas are not going to survive. How long [will] the government survive?

Actually, before we answer that, let’s consider the question itself – starting with the very first sentence.

This is the fear of a guy who openly assumes that when tough times come, he’ll still have his computer and his TV. It’s the first world problem of a guy who makes more than the median national income. Who has enjoyed all the advantages of growing up during the most prosperous decades of American history – because he’s that old.

In other words, it’s the fear of a guy who fits precisely where the Tea Party demographic overlaps with the gun owner demographic: middle class and aging.

America’s fascists aren’t the rugged survivalist killing machines they make themselves out to be. They aren’t the young, diverse and relatively liberal demographic that makes up today’s military and law enforcement personnel. They aren’t the prime-of-their-lives weekend-warrior demographic targeted by sporting goods and fitness marketers. And they are decisively not the young black men who have by far more experience with gun violence, combat and conflict with state authorities than any other group of Americans.

Nope: American fascists are a lot less like John Rambo, and a lot more like that surly dad on The Wonder Years. They’re the cranky, loudmouthed oafs that AM talk radio targets with ads for Viagra and antacids.  And when they start talking about their strategy for defeating a tank full of soldiers – like Cramer does – all you can do is laugh.

No safety in numbers

Cramer supposes that he can count on an army of at least “0.03% of the population (about 100,000 people)” – in fact, this is supposed to be a modest estimate. But is it at all realistic?

Set aside the facile appeal to scale – as if 100,000 is somehow plausible simply because it’s a small percentage (of a giant number). Consider the precedents.

The largest domestic uprising since the Civil War –at the Battle of Blair Mountain – involved about 10,000 combatants. That’s going all the way back to the early twentieth century. Nothing approaching resistance of even that modest scale has appeared in the modern era.

Consider the few occasions where the American right has actually delivered on their violent threats. A few bricks through Congressional windows when Obamacare passed. A couple hundred shootings, bombings and arson attempts against abortion providers. In both cases, allegations of tyranny and oppression well beyond Cramer’s scenario: an unconstitutional communist health care law rammed down the throat of the American people on one hand, the daily mass murder of innocent unborn babies on the other. In both cases, incessant sabre rattling: “next time we’ll be armed” signs at Tea Party rallies, “educational” websites posting the home addresses of doctors, and so on. In both cases, an utterly unremarkable uptick in crazy and absolutely no meaningful anti-government resistance whatsoever.

Let’s see the American right recruit enough people to obstruct just four lanes of traffic, as they (hilariously) failed to do during their much-hyped beltway trucker protest last year. Then we can start speculating about how many dozen Republican tough guys are actually gonna follow through with their threats.

Be careful what you wish for

So to paraphrase John Kenneth Galbraith: when a Republican fascist begins an argument “Let us assume,” the correct response is “Let’s not.”

Let’s not assume that the militant right can build a credible guerilla force from a demographic pool of aging, pampered civilians and a statistical handful of radicalized veteran defectors. Let’s not just assume they can mobilize a hundred thousand combatants in an unusually pacified and disengaged body politic that hasn’t seen insurrection approaching that magnitude since the Civil War.

Let’s not make all kinds of convenient assumptions that are at the very least in direct dispute – and that are more accurately described as “insane”.

Then again, never mind. Let’s give them everything they’ve asked for. An elite army of Chuck Norrises in tricorn hats who have trained their entire lives for this final showdown with Tyrant Obama’s Neocommunist army. What would happen?

The kernel of truth here is that the government can’t win. About this one thing, Cramer’s actually right. The United States military, practically invincible in conventional warfare, has no idea how to fight a guerilla insurgency. And probably never will. It can drone into oblivion even the most trivial attempts to establish a base of operations, or any kind of centralized organizational structure, but it has no idea how to even target the ephemeral agents of asymmetrical warfare. Much less destroy them.

But if Cramer thinks this means a victory for the right, he’s badly mistaken.

“Be scared,” Ian Welsh writes, “not because [of] those on the left who insist that modern militaries are unbeatable… [but because] such fights leave countries in ruins.”

Asymmetrical warfare relies entirely on transforming every inch of contested territory into a battleground. On using civilian infrastructure and civilians themselves as shields and shelters from superior forces. And on defeating firepower with willpower by protracting the battle as long as possible. It cannot be fought without scorched earth and salted fields. It can’t end without leaving a scarred civilization and a neurotic society in its wake. And more likely than anything, it doesn’t end at all – it simply persists in a horrific stalemate for decades.

If the right ever gets around to exercising those “Second Amendment remedies,” as noted military strategist and guerilla warfare scholar Senator Sharron Angle calls them, there isn’t going to be much of an America left to save. Rural life will revert to the status quo of unreliable power grids and limited public services that characterizes much of the developing world. The suburbs, particularly vulnerable to economic contraction, will evaporate. Towns too will depopulate, or come to resemble the lawless warzones along Mexico’s border – all telling precedents of what happens when modern guerillas take up arms against modern law enforcement. Even major metropolitan cities will start to look like Detroit – or Baghdad.

When our rugged right-wing survivalists shrug all of this off as a small price to pay for freedom, just remember how upset Cramer got when Big Government kept him from logging on to Twitter. We’re fortunate that the right’s delusions of apocalyptic insurrection are just that: belligerent, infantile delusions. We’re fortunate that we have democracy instead of violent anarchy. And so is the right.

Mueller declines to weigh in on impeachment 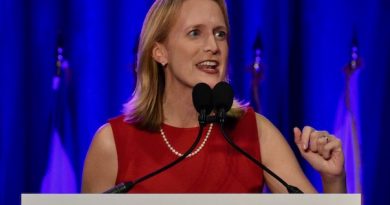 234 thoughts on “Militant Republicans: Nope, you aren’t going to overthrow the government”